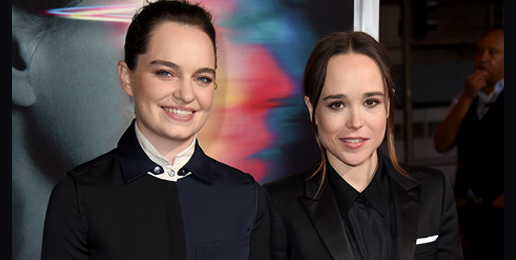 Lesbian actress Ellen Page just posted an Instagram photo of her and her “wife” topless and kissing in honor of LGBTQ “pride” month, providing symbolic evidence that the cultural movement to normalize homoeroticism is chiefly about sex—not love—at least not love in its true and complete sense.

Page is the young actress who in early February delivered an anti-Christian screed on The Late Show with arrogant Catholic heretic Stephen Colbert in which she attacked Vice President Mike Pence over his theologically orthodox views on marriage. In her diatribe, Page demonstrated—again—that cultural regressives can’t distinguish between moral disapproval of acts and hatred of persons.

With a sycophantic Colbert hanging on her every word, the over-emoting Page declared that Mike Pence’s views on homosexuality and marriage were the cause of the allegedly homophobic attack on homosexual actor Jussie Smollett:

So many questions about her unhinged lecture.

Pence spent his “career trying to cause suffering”? Really? His entire career?

What is Page’s conclusive, research-based evidence that it is the faith of theologically orthodox Christians who express their views in a biblically defensible manner that causes child abuse, childhood suicide, or “hate” crimes?

Word to Page: No one objects to her “loving” another woman. Christians are commanded to love their neighbors and even their enemies. No, theologically orthodox Christians never begrudge people love. What Christ-followers disapprove of are homoerotic acts.

And they believe that marriage has a nature—an ontology—central to which is sexual differentiation, and without which a union is intrinsically non-marital.

Colbert and Page would be well-served by spending some time with Carl Trueman, biblical studies professor at Grove City College, who recently wrote an essay for First Things titled “Love Is Not a Feeling” in which he said,

To approach the matter from Philip Rieff’s perspective, we might characterize modern men and women as psychological selves for whom the good and the true is identical with whatever happens to make them psychologically happy at any particular moment. Or we could use Charles Taylor’s notion of expressive individualism, that the modern self is the person who expresses outwardly that which they feel inwardly…. Or we could adopt Alasdair MacIntyre’s notion of emotivism, and see modern ethics as manifestations of emotional preferences. Bringing all three to bear upon the sexual revolution, it becomes clear that the LGBTQ moment is not merely a revolution in what sex means; it is a revolution in what it means to be human. (emphasis added)

For many, gay marriage is a dead issue…. And therein lies the danger: We need to remember that for a Christian to recognize gay marriage as Christian… is not simply to recognize a shift or expansion in the definition of marriage. It is far more significant for the Faith…. it is to abandon Christian teaching about the self—as made in the image of God, and as resting upon an order which transcends individuals and their contexts—in favor of one constituted by whatever the moral structure of society happens to be at any given moment in time.

Gay marriage emerged from the sexual revolution; and the sexual revolution is the latest iteration of a revolution in the self, which has been taking place for hundreds of years and which stands opposed to the essentialism regarding human beings at the heart of orthodox Christianity. The moral structure of contemporary society stresses the foundational importance of individual psychological conviction with a marked preference for prioritizing polymorphous sexual desire as definitive of a sense of self. In legitimating gay marriage, a symptom of this underlying structure, Christians therefore effectively affirm the legitimacy of this deeper revolution of the self.

It’s important to note that the conception of marriage as the union of one man and one woman as articulated by Jesus is intellectually accessible even to those who reject Christ.

It’s important to note also that to reject Page’s and Colbert’s re-conception of marriage is not a manifestation of hatred but, rather, of true love—the kind that children deserve and society desperately needs. Homosexual faux-marriage will no more be a dead issue for committed Christ-followers than will be the slaughter of the unborn.

“The grass withers, the flower fades,
but the word of our God will stand forever.”
(Isaiah 40:8)

Dr. Peter Leithart: How Are We Living in Apocalyptic Times
b
a
x
r