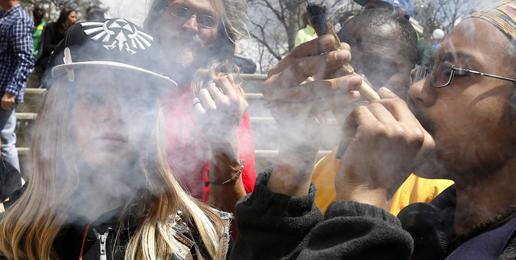 State Senator Heather Steans (D-Chicago) and State Representative Kelly Cassidy (D-Chicago) have spent 2 years developing and promoting their proposal to legalize “recreational” marijuana in Illinois. On May 7th, their 533-page bill (SB 7) was introduced in the Illinois Senate.

Last week the Senate Executive Committee held a 2.5 hour subject matter hearing on this bill, and it was alarming to hear how many concerns and questions they were unable to lay to rest.

Michele Ratini, a social worker from a Leyden High school District 212 in Northlake, testified in opposition to legalization, pointing out that teenagers are not smoking cigarettes anymore, but are instead smoking and vaping tobacco and marijuana. She said she is seeing an increased number of students exhibiting paranoia and psychosis.

Dr. Albert Mensah, who runs the Mensah Medical Center, corroborated her statements. But Illinois State Senator Toi Hutchinson (D-Chicago Heights), a strong proponent of legalization, thinks that that is the very reason we should legalize, tax and regulate it.

If students are easily getting the high potency stuff now, how much easier will it be for them to get it once it’s legalized?

To give you a reference point to digest the following information, keep in mind that the Woodstock marijuana of the 1960s and 1970s contained 1-3 mg. of THC (what gets you high). And people back then got plenty high. Today’s marijuana contains 20-25 mg. of THC.

A question was raised in the committee hearing: Will expungements of felony convictions for marijuana allow for someone filling out a Firearm Owners Identification (FOID) or Conceal Carry form to indicate “No” on whether they have ever been convicted of a felony? (Keep in mind that the vast majority of inmates in prison for possession charges have plea-bargained down from more serious felony crimes.) Illinois Deputy Governor Christian Mitchell, who was representing the governor’s office, answered “Yes.” In other words, convicted felons, whose more serious crime charges were significantly reduced, will have their records automatically expunged.

Also, once you read what the bill will allow, keep in mind that today’s high potency marijuana is directly linked to an increase in mental illness such as psychosis, schizophrenia and violent behavior.

The bill is huge, but here’s a small picture of what SB 7 will do:

25 percent on cannabis with THC level above 35 percent

25 percent Restoring Our Communities Fund (Apparently, once you flood the “disproportionately impacted” communities with more drugs, you throw some money their way. But I digress.)

10 percent Budget Stabilization Fund (There’s an oxymoron if I ever saw one.)

There are no limits to THC levels in what SB 7 will allow. The Dutch government has walked back their liberal drug policies because of the problems they have encountered with high levels of THC. They now consider 15 percent or higher as a hard drug, alongside opioids and ecstasy. That should tell us how serious and dangerous it is to legalize high potency marijuana as “recreational.”

SB 7, as you can see from the proposed taxation schedule, has no limits. High THC levels are linked to an increase in mental illness, especially psychosis and schizophrenia, as well as being responsible for the increase in hospitalizations and ER visits. SB 7 also allows for concentrates, or extracts, which are sticky substances produced via distillation and containing upward of 99 percent THC.