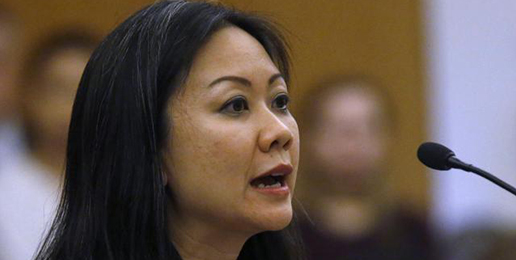 Nothing screams “nasty woman” quite like Virginia lawmaker Kathy Tran’s cold-blooded and thankfully defeated bill that would have legalized de facto infanticide. When asked prior to the vote if her bill would allow the slaughter of a full-term baby during labor, she was forced to publicly admit that it would.

If it had passed, full-term healthy babies could have been slaughtered for any reason that a murderous doctor deemed a threat to a mother’s “mental health.” Just wondering, shouldn’t this be a hate crime? Wikipedia defines a hate crime as one in which a “perpetrator targets a victim because of his or her membership in a certain social group.” Doesn’t the premeditated, direct killing of humans based on their age fit that definition?

Tran’s morally transgressive and repugnant bill removed the requirement that abortion is permitted if “continuation of the pregnancy is likely to substantially and irremediably impair the mental… health of the woman.” She removed the words “substantially and irremediably.” This means that a mother could have her full-term child aborted if she says it would only insubstantially and remediably “impair” her “mental health.” And y’all know what that means. It means that Virginia would have followed Alaska, Colorado, New Hampshire, New Jersey, New Mexico, Oregon, and Vermont—where women can have their full-term babies killed for no reason—in legalizing de facto infanticide.

As I wrote several days ago, 24 other states permit the active, intentional killing of full-term babies for “mental health” reasons, which include “emotional, psychological, and familial” considerations. In other words, for any reason. What Tran’s removal of the words “substantially and irremediably” did was make it glaringly obvious that “mental health” is a deceitful rhetorical pretext to conceal that abortion of full-term, healthy humans is legal.

When asked about this barbaric law, Democratic governor and pediatric neurologist Dr. Ralph Northam employed some tricksy rhetoric to try to persuade listeners that de facto infanticide of full-term babies is justified if they are defective:

First, who calls a full-term baby a “fetus”? Interestingly, in the next sentence, he inadvertently acknowledged the truth that the full-term “fetus” is actually an infant.

Second, would an infant that may or may not be resuscitated be a dead infant—one whose breathing or heart has stopped? If so, this raises some questions. How did this fetus/infant in Northam’s sanitized hypothetical come to be dead? Was Northam alluding to the natural death of an infant born with a condition incompatible with life, or was he referring to an infant whose death was caused during labor by a Dr. Mengele-wannabe? If full-term babies can be killed because of severe deformities or terminal conditions one day prior to their birth day, why shouldn’t full-term babies with severe deformities or terminal conditions be killed post birth—also known euphemistically as “after-birth abortion.”

Tran and Northam seek to implement legislatively what philosopher Michael Tooley, Princeton University “bioethicist” Peter Singer, and eugenicists everywhere advocate. They advocate for the legal right of some humans—let’s call them Superhumans—to decide which humans have a right to live and which—because of their defects—have no such right. Let’s call the latter group the Expendables.

Tooley wrote this in 1972 in an article titled “Abortion and Infanticide”:

An organism possesses a serious right to life only if it possesses the concept of a self as a continuing subject of experiences and other mental states, and believes that it is itself such a continuing entity…. If this view of the matter is roughly correct, there are two worries one is left with at the level of practical moral decisions, one of which may turn out to be deeply disturbing. The lesser worry is where the line is to be drawn in the case of infanticide…. The practical moral problem can thus be satisfactorily handled by choosing some period of time, such as a week after birth, as the interval during which infanticide will be permitted. This interval could then be modified once psychologists have established the point at which a human organism comes to believe that it is a continuing subject of experiences and other mental states.

Through some tortured reasoning about the ethics of torturing kittens, Tooley concludes that it is not membership in the species “homo sapiens” that determines the right to life but rather self-conceptualization as a “continuing subject of experiences and other mental states” and a belief that one is “such a continuing entity” that confers on humans a right to live. Therefore, neither newborns nor humans in the womb—or as Tooley calls them, “parasites”—enjoy that right.

As I have written, Peter Singer wants to extend killing “rights” 30 days post-natally to allow parents to ascertain the health status of their conditionally wanted children. After all, some imperfect humans may have escaped all the currently available tests for determining human perfection and, therefore, “wantedness.”

The infamous Singer himself acknowledges in his book Practical Ethics that we have already started down the unctuous slope:

I do not deny that if one accepts abortion on the grounds provided in Chapter 6, the case for killing other human beings, in certain circumstances, is strong. As I shall try to show… this is not something to be regarded with horror…. [O]nce we abandon those doctrines about the sanctity of human life that… collapse as soon as they are questioned, it is the refusal to accept killing that, in some cases, is horrific.

More recently, in 2011, two philosophers at the University of Melbourne, Alberto Giubilini and Francesca Minerva, published a paper in which they advocated for “after-birth abortion”:

[W]e argue that, when circumstances occur after birth such that they would have justified abortion, what we call after-birth abortion should be permissible.

In the “social justice” paradigm that divides society into oppressors and oppressed, who are the oppressors: the Superhumans or the Expendables?

On February 22nd, IFI is hosting a special forum with Dr. Erwin Lutzer as he teaches from his latest book, “The Church in Babylon,” answering the question, “How do we live faithfully in a culture that perceives our light as darkness?” This event is free and open to the public, and will be held at Jubilee Church in Medinah, Illinois.