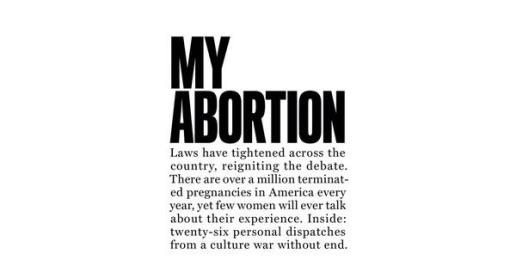 A signal event in America’s long trial over the tragedy of abortion occurred this week with the publication of a cover story in New York magazine that was simply titled, “My Abortion.” As the cover advertises, the article features “twenty-six personal dispatches from a culture war without end.”

The issue is riveting, offering testimonies from women who have aborted their children—some of them repeatedly. Meaghan Winter begins the article by setting the context in 2013, forty years after the U.S. Supreme Court handed down the Roe v. Wade decision, believing that it has settled the issue.

As Winter explains, “Of all the battles in our half-century culture war, perhaps none seems further from being resolved, in our laws and in our consciences, than abortion.”

That statement, taken on its own terms, is incredibly revealing, even as it is self-evidently true. The advocates of legal abortion are particularly perplexed and frustrated by this fact. Their confidence had been that Roehad settled the issue and that abortion on demand would become a central part of the nation’s moral consensus. But Roe did not settle the issue. Indeed, the abortion issue has been a central and unavoidable moral conflict in this nation ever since.

Prior to Roe, the pro-life movement was not much of a movement at all. It can be argued that Roe actually sparked the rise of the pro-life movement as a powerful moral and political force in America. The nation’s conscience on the issue of abortion is far more conflicted now than in 1973. Pro-life arguments and the rise of prenatal imaging technologies have shifted the nation’s understanding of abortion to the extent that younger Americans are actually more pro-life than their parents. More Americans now identify themselves as pro-life rather than as pro-choice.

On the other hand, a slim majority of Americans supports Roe and the availability of legal abortion, at least in the early months of pregnancy. America has a divided mind and a divided heart on abortion. But that must be seen as a pro-life victory of sorts, for the very fact that abortion remains such a controversial and morally troubling issue refutes the claim that abortion on demand is a settled fact. It is not, as this important cover article reveals.

New York magazine is a leading barometer of the nation’s urban cultures. New York City is socially and culturally liberal, and abortion on demand is supported by dramatic percentages of the population. In some neighborhoods in New York City, a majority of pregnancies end in abortion. But this cover story makes clear that abortion is still an issue that can trouble the conscience of New Yorkers.

Meaghan Winter reports on the fact that several states have adopted abortion legislation, especially in the last two years. In that period, she explains, “26 states have passed over 111 provisions restricting abortion.” After decades marked by endless legislation and court challenges on abortion, “we seem no closer to consensus on when, where, how, and if a woman should be able to terminate a pregnancy.” She notes correctly thatRoe “was qualified in its judgment.” We did not hear that admission when the decision was handed down in 1973.

Winter then drops this bombshell: “But for all the regulations and protests, despite ‘safe, legal, and rare’ and ‘abortion is murder,’ abortion is part of our everyday experience. Nearly half of all pregnancies are unintended; about half of those—1.2 million—will end in abortion each year.”

That is the tragedy of abortion. The pro-life movement has made gains and states are adopting new restrictions, but the death toll of aborted babies continues to rise with millions added to millions since Roe v. Wade.

The twenty-six testimonials published in the New York article are heart-wrenching and deeply troubling. It is clear that many of the women telling their stories have still not come to terms with what abortion really is, and how to think of the baby whose life was ended. Nicole, writing from Kentucky, was 19 when she was emotionally coerced by her boyfriend to get the abortion. “I don’t think abortion is killing,” she says, “but I’d always been against it.” After a month had passed, she says that both she and her boyfriend regretted the abortion. She then states this: “When I cry about it, I cry alone. He thinks it would make me sad to talk about, but I don’t want our baby to think we forgot. I’ve never heard of anybody else having an abortion here.”

Note carefully how she refers to the child: “our baby.” The fact that the life within her was indeed a baby, and not just a mass of tissue, comes out even in how she remembers the baby in her regrets.

Anya, on the other hand, says she has no regrets. She had abortions in 2003 and 2006. When going to get the second abortion, her boyfriend was emotionally distressed, so she told him to pull over so she could drive. “I respect that it was an emotional experience for him. I never think about the abortions. When I tell people, they respond with a panic face, and when I say I’m truly okay with it, they make a second panic face. I end up comforting them.”

Alex, age 24, also had two abortions. “Sometimes you regret and sometimes you feel good,” she says. “You think, ‘the baby would be a year old now.’” Once again, the baby is still on her heart as a baby, and nothing less.

Maria, on the other hand, had an abortion in Pennsylvania in 2003. As she was cramping in the clinic after the abortion, her husband asked her where she wanted to go on vacation. “We booked a trip to Spain,” she says. Did her conscience follow her to Spain?

Why did New York publish this cover story? Meaghan Winter asserts that “abortion is something we are more comfortable discussing as an abstraction.” She may be right. Pro-lifers reading this important article must come to terms with the fact that so many women find themselves in such personal distress that they see abortion as the way out, even if that means the death of the baby. This underlines the noble and essential work of crisis pregnancy centers and the necessity of ministering to and assisting these women long after they choose life for their babies.

If the purpose of this article was to assist women to overcome the stigma of abortion, it is hard to imagine that it succeeded. The fact that this article appears four decades after Roe is proof that the decision failed to reset the nation’s conscience on abortion.

The pro-life movement faces huge challenges in the task of reaching the nation’s conscience, but there are also great opportunities. This article reveals both in full force.

For the advocates of abortion, these testimonies offer a clear refutation of their strategy of doing everything possible to speak constantly of a “woman’s right to choose,” while avoiding any reference to the baby. The baby refuses to disappear. When these testimonies of abortion reveal the very women who had an abortion speaking of “our baby” and noting that “the baby would now be one year old,” the moral bankruptcy of the pro-abortion argument is there for all to see. The baby refuses to leave the picture.

That essential point is powerfully revealed in Bryce A. Taylor’s eloquent poem, “How to Have an Abortion,” originally published at First Things:

Don’t think about the freckles he, or she,
Might have, or how much hair, how big a grin,
Or whether swimming would come naturally,
Or whether–it?–might play the violin.

Don’t think of prom, don’t think of puppy love
Or calculus, or snow, or spring in bloom,
Or anything that might remind you of
The future now contained within a womb.

Meaghan Winter says that Americans prefer to speak of abortion as an abstraction. But, as that poem makes so clear, the baby will not agree to remain an abstraction. For that reason we should see this important cover article as proof of the urgency and the enormity of our challenge in the defense of life—and as evidence of our opportunity as well.