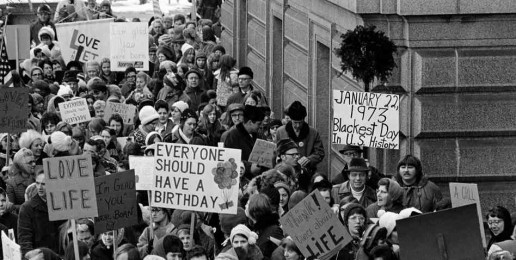 Pro-lifers need to better understand the history of the pro-life movement and what Roe did to it.

On the fortieth anniversary of Roe v. Wade, it has suddenly become fashionable in certain circles to suggest that the controversial Supreme Court decision was actually a blessing in disguise for pro-lifers, because it breathed new life into a fledgling right-to-life movement and put the abortion rights movement permanently on the defensive. Pro-choice activists have been “losing ever since” Roe, a Time magazine cover story proclaimed this month. Jon Shields pushed this argument even further in the January issue of First Things, declaring that Roe “crippled the pro-choice and energized the pro-life movement, creating one of the largest campaigns of moral suasion in American history.”

Unfortunately, most pro-lifers are unprepared to respond to claims like these, because for years pro-lifers have not really understood what Roe did. They have too often accepted the myth that neither legal abortion nor an organized pro-life movement existed prior to Roe. Although they have denounced Roe vociferously, they have justified doing so with the erroneous argument that Roe was the primary cause of the nation’s high rate of legal abortion, as though legal abortion did not exist in the United States before 1973.

Actually, Roe did not introduce legal abortion to the United States; it did something even worse. Prior to Roe, legal abortion existed, but so did a large, vigorous pro-life movement, and that movement was beginning to win the public debate on abortion. Roe deprived the pro-life movement of its legal victories and allowed abortion to become more available to poor and minority women. It subverted the democratic process and led to a partisan polarization that only grew worse with time. Perhaps worst of all, it nullified the pro-life movement’s constitutional arguments and enshrined in case law a constitutional interpretation that deprived the unborn of any constitutional rights.

Contrary to popular belief, legal abortion was widely available in the United States prior to Roe. Legal abortion for limited reasons had been introduced in Colorado and California in 1967. Abortion on demand (that is, legal abortion for any reason) was introduced to the United States in 1970, three years before Roe, when New York and three other states began permitting unrestricted abortions up to the twentieth or twenty-fourth week of pregnancy. Because New York and California’s abortion laws lacked a residency requirement, some abortion providers began offering travel packages for women to fly to New York or Los Angeles to terminate their pregnancies. Hundreds of thousands of American women did so; in 1972, the year before Roe v. Wade, there were 586,760 legal abortions performed in the United States.

But prior to Roe, there was also a large, well-organized pro-life movement that was beginning to turn back the tide against abortion legalization. After losing numerous state legislative debates over abortion policy between 1967 and 1970, pro-lifers reorganized, and beginning in 1971, they experienced a string of uninterrupted legislative victories. By using fetal photographs to convince the public of the evils of abortion, and by making Protestants, Jews, and women the spokespersons for their movement in order to avoid charges of sectarianism or chauvinism, pro-lifers gained a hearing for their cause.

In the spring of 1971, pro-lifers defeated abortion legalization bills in all twenty-five of the state legislatures that considered them. The next year, their record was almost as successful: Only one state liberalized its abortion law, and it did so only under court order. Pro-lifers were equally successful at the ballot box. When Michigan and North Dakota introduced voter initiatives to legalize abortion in 1972, pro-lifers defeated both measures by wide margins. By the end of 1972, pro-lifers thought that they were probably within only one year of repealing New York’s permissive abortion law, and the director of Planned Parenthood’s Western Region division worried that pro-lifers would soon make abortion illegal in California too. “In the West we view ’73 as a difficult year for abortion,” he confided to a colleague in the summer of 1972.

Roe stopped a victorious pro-life movement in its tracks and deprived it of its gains through the democratic process. It forced dozens of states to legalize the procedure against the will of their citizens. When Roe was issued, only nineteen states had adopted liberalized abortion laws, and only four of those states had laws on the books that allowed abortion on demand. Roe required every state to allow abortion on demand.

In 1973, the first year after the Roe decision was issued, there were approximately 750,000 legal abortions performed in the United States—a 28-percent increase over the previous year. By 1980, after abortion clinics had been built across the nation, the annual abortion rate had doubled to 1.5 million.

Roe also made abortion more available to poor women, as the number of clinics quickly expanded after the decision. State and federal governments also funded abortions for poor women through Medicaid, prior to the Hyde Amendment. This availability led to higher abortion rates among poor and minority women. By 2008, 55 percent of the country’s legal abortions were performed on black or Hispanic women, while only 36 percent were performed on non-Hispanic whites. Forty-two percent of women who obtained abortions in 2008 were living below the poverty line. In 1973, by contrast, 75 percent of the women who obtained legal abortions were white. Many pro-lifers view this shift of abortion services to the poor and minorities as a sign that society has refused to offer substantive solutions to the problems that impoverished women face, and has instead simply encouraged them to terminate their pregnancies.

But what really made Roe an egregious decision, in the view of pro-lifers, was that it deprived a class of people of their constitutional rights by declaring them non-persons, something they thought the Supreme Court had not done since Dred Scott v. Sandford in 1857. Prior to Roe, pro-life lawyers had found a receptive audience in some state and federal courts for their argument that the Fifth and Fourteenth Amendments’ due process clauses protected fetal life, and that the legalization of abortion on demand was therefore unconstitutional. As the Fifth Amendment states, under the Constitution no person can “be deprived of life, liberty, or property without due process of law.” If fetuses were human persons, then their lives were constitutionally protected.

Pro-life lawyers believed that case law supported their argument that fetuses were indeed human persons, and that they therefore enjoyed the constitutionally protected right to life. Already, they pointed out, several courts had recognized fetal personhood in prenatal damage cases. In Smith v. Brennan (1960), for instance, the New Jersey state supreme court declared that because “medical authority recognizes that an unborn child is a distinct biological entity from the time of conception,” parents of an unborn child whose life was terminated in an accident had the right to sue for compensation for the loss of their child’s life. Similarly, in O’Neill v. Morse (1971), the Michigan state supreme court declared that the fetus was a “person” with an existence separate from the mother, and that “the phenomenon of birth is not the beginning of life; it is merely a change in the form of life.”

If fetuses were declared to be persons for the sake of prenatal damage claims, then the law could not deprive them of personhood in abortion cases, pro-life lawyers argued. Some courts accepted this argument. In 1967, for instance, the New Jersey state supreme court ruled in Gleitman v. Cosgrove that fetal birth defects caused by rubella did not constitute grounds for an abortion, because “the right to life is inalienable in our society.”

But the legal tide began turning against the pro-life movement in the late 1960s and early 1970s because of courts’ increasingly broad interpretations of the “right to privacy.” In 1965 the Supreme Court declared in Griswold v. Connecticut that the right to privacy gave married couples the right to use birth control without state interference. Citing that ruling, the California state supreme court declared in People v. Belous (1969) that “the fundamental right of the woman to choose whether to bear children” made restrictive abortion laws unconstitutional. Other state supreme courts adopted Belous’s reasoning. In 1972, courts in Florida, New Jersey, and other states struck down restrictive abortion laws.

Roe codified this new interpretation of the right to privacy in constitutional case law and prevented pro-life lawyers from ever again gaining a legal hearing for their argument that the Fifth and Fourteenth Amendments protect fetal life. By a vote of seven members, the Court deprived the unborn of the most basic rights of personhood and made it legal to terminate their existence. “The horrible truth is, the Court’s decision put our nation officially in favor of killing by law,” pro-life activist J. P. McFadden declared in National Review.

When the Supreme Court rejected their constitutional argument, pro-lifers dedicated their efforts to passing a Human Life Amendment (HLA) that would enshrine the protection of the fetus’s right to life in the Constitution. When the HLA failed to pass in Congress, after more than a decade of repeated attempts to bring it to a floor vote, pro-lifers began a campaign to reverse Roe by changing the composition of the Supreme Court. That campaign polarized the nation’s political parties, making each judicial nomination a battleground over abortion. After working for thirty years to change the composition of the Supreme Court, pro-lifers have not yet been able to find the five judicial votes needed to reverse Roe.

If Roe is overturned someday, its reversal will not end legal abortion in the United States, nor will it likely have an immediate impact on the abortion rate, because the states that are the largest providers of abortion have already signaled that they will continue to permit unrestricted abortion in the event that Roe is overturned. Nor would Roe’s reversal end the nation’s debate over abortion; in fact, Jon Shields is probably right to argue that the reversal would result in a pro-choice backlash.

Yet if Roe is reversed, no state legislature or lower court will ever again have to accept abortion as a sacrosanct constitutional right, and pro-lifers will once again have the freedom to argue, without fear of contempt or ridicule, that the Constitution protects the right to life of the unborn child. Roe cut off public discussion of these questions; the reversal of Roe would open it up again.

Surely all pro-lifers can agree that Roe is a travesty of justice against the unborn child’s right to life. Still, they need to make the right criticism of Roe.The decision neither started legal abortion nor hurt pro-choice momentum, but instead set back a trajectory of pro-life progress that is still reviving after forty years.