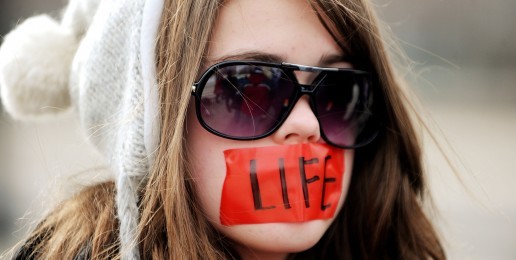 On March for Life, Eve of State of the Union, Pro-Life Leader Calls for Grassroots to Seize Momentum in 112th Congress

“It’s not just a movement anymore. All the polls show this is pro-life America now,” Dannenfelser said. “It’s time for us to flex the muscle that we just flexed in this election and do everything we can in this Congress to protect human lives… I invite you to go to our website, www.StopAbortionFunding.com, and, if you’re not marching today, please take a moment to pray and act. Then, tomorrow night, watch that State of the Union message. See if the president decides to follow up on his promise [that tax dollars not be used to fund abortion in health care] because right now is the moment, a moment in time which we have not seen since 1973, where we have the momentum. We have the power. We have all the ability to save children’s lives by stopping the funding of their deaths. When he gives his State of the Union message, it should certainly include how he has or has not lived up to that promise.”

Dannenfelser’s address comes on the heels of the introduction of three bills aiming to end taxpayer funding of abortion – the “No Taxpayer Funding for Abortion Act,” sponsored by the Co-Chairs of the Congressional Pro-Life Caucus, Reps. Chris Smith (R-NJ) and Dan Lipinski (D-IL), the “Protect Life Act,” sponsored by pro-life champion Rep. Joe Pitts (PA-16), Chairman of the Energy and Commerce Subcommittee on Health, and the “Title X Abortion Provider Prohibition Act,” sponsored by Rep. Mike Pence (R-IN).

The “No Taxpayer Funding for Abortion Act” creates a government-wide statutory prohibition on taxpayer funding of abortion. The bill also codifies the Hyde amendment which ensures that no federal funds pay for abortion under the Labor Health and Human Services Appropriations Bill along with several other pro-life riders that currently have to be considered every year. The “Title X Abortion Provider Prohibition Act” ensures that tax dollars are not sent to abortion providers under Title X family planning grants. The “Protect Life Act” amends the Patient Protection and Affordable Care Act (PPACA) to ensure that no federal funds pay for elective abortion, prevents any federal agency from mandating abortion and protects the conscience of healthcare workers.

Dannenfelser will be available for comment on-site during the annual March for Life on Monday, January 24. Contact Kerry Brown at 703-470-1926 if you would like to speak with her.

Introduce IFI to your friends, church or civic group

Serve as a contact person by receiving information from IFI and distributing it to others or posting it on bulletin boards. You can keep current by signing up for IFI E-Alerts and IFI E-Newsletters and be registering and checking in on our Take Action center.

Host a gathering of friends for a private evening with the IFI team.

Staff members are available to speak at your church or group function about IFI’s work at the Illinois Capitol, with parents working against liberal indoctrination at their public schools, and a variety of other issues including marriage, fatherhood, and current family policy initiatives.