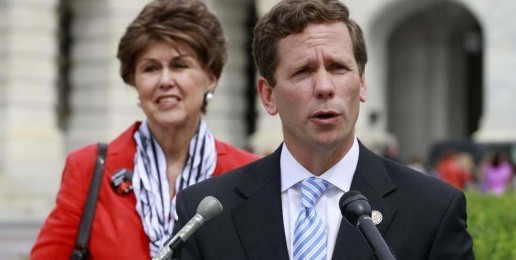 Which conservative came up with the bright idea that all that matters in political life are fiscal and defense issues? Some “conservatives” have decided it doesn’t really matter if the government formally recognizes the union between two men as a marriage or if kindergartners in public schools are taught that families headed by lesbians are no different from families headed by a mother and father. And some conservatives have decided that it’s okay if preborn baby girls are killed because mommy and daddy want a boy — conservatives like freshman U.S. Representative Robert Dold (R-Northbrook) who hails from Mark Kirk’s old stomping grounds, Illinois’ 10th Congressional District, and is fashioned from the same ideological mold as Mark Kirk.

Rep. Dold has the audacity to call himself a moderate while being one of only seven Republicans in the U.S. House to vote against the ban on sex-selective abortions (Prenatal Nondiscrimination Act). That’s right, folks, Dold defends the “right” of a woman to kill her unborn baby for no reason other than that the baby’s biological sex doesn’t happen to suit her fancy. If Dold had any bona fides with women, surely he should have lost them when he cast that morally repugnant vote.

Illinoisans concerned about the apparent lack of sound moral reasoning can rest assured, however, because in a statement Dold shared how deeply offensive he finds sex-selective abortions:

Abortions based on gender-selection are reprehensible, but federal legislative intervention and criminalization of this decision is not the proper approach to addressing gender discrimination. These are serious issues, particularly in some foreign countries, but today’s legislation would obligate American doctors to police and report “thought crimes” in the women they serve and would put the federal government between the doctor-patient relationship.

Dold asserts that this law “would obligate American doctors to police and report ‘thought crimes’” to authorities, even though the bill did not obligate doctors to even ask about a mother’s motivation for terminating the life of her gestating baby. The law would have prohibited doctors from “knowingly” performing “an abortion…based on the sex, gender, race or color of the child….”

Dold finds the prospect of the federal government getting in between a doctor and patient more reprehensible than doctors getting in between an unborn baby and her unalienable right to life. I wonder if Dold objects to laws prohibiting physician-assisted suicide, because such laws “put the federal government between the doctor-patient relationship.” Of course, there are differences between the two situations: in the case of physician-assisted suicide, all parties directly affected are able to offer their consent. Wouldn’t the reprehensible act of taking the life of someone who cannot offer consent justify at least the same degree of legislative intervention?

While Dold believes that “Abortions based on gender-selection are reprehensible,” he also believes that “federal legislative intervention and criminalization…is not the proper approach to addressing gender discrimination.” Seriously?

Here are some examples of federal legislation that address gender discrimination, the absence of which laws, however, will never result in the death of a human being:

Federal legislation protecting women from housing discrimination is justifiable, but Dold gets the moral shivers at the prospect of federal legislation that protects preborn baby girls from extermination. It might behoove Dold (and his constituents) if he were to spend a little less time thinking about fiscal matters and a little more time studying moral philosophy and logic.

Last week’s vote draws attention to the elephantine mass of aborted babies in the room. Why does Dold find sex-selective feticide reprehensible but doesn’t find feticide for no reason at all — which is what we have in America right now — reprehensible?

Just how immoderate and incoherent is Dold? Here’s what Laura Bassett wrote on the Huffington Post about Dold:

Planned Parenthood does not have many GOP friends in Congress, but one rare, pro-choice Republican in the House of Representatives stuck his neck out on Wednesday and announced his plan to protect the family planning provider from his party’s political attacks.

Let me understand this: Dold is a pro-choice Republican who finds nothing problematic with using  public money to fund the chief provider of abortion in the country and yet he wants the public to believe he finds sex-selective abortion “reprehensible”? Yeah, right.