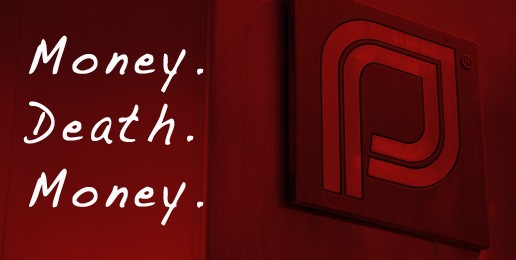 In the macabre, perverse universe in which Planned Parenthood doctors and administrators live and move and have their baby-devouring being, euphemistic language is essential. Melissa Farrell, Director of Research for Planned Parenthood Gulf Coast refers to her contribution to “the organization” as “diversification of revenue stream.” The “revenue stream” is composed of either small intact human beings or the parts that remain once a baby—er, I mean, a male or female “product of conception”—has been exterminated and disemboweled or torn limb from limb.

Farrell casually shares something that sounds remarkably like an admission of violating both moral and federal law:

We’ve had studies in which the company…has a specific need for a certain portion of the products of conception. And we bake that into our contract and our protocol….so we deviate from our standard to do that….[W]e can get creative about when and where and under what conditions can we interject something that is specific to the tissue procurement needs….[S]ome of our doctors in the past have projects, and they’re collecting the specimens, so they do it in a way that they get the best specimens, so I know it can happen…. [I]f we alter our process and are able to obtain intact fetal cadavers, then we can make it part of the budget.

Farrell later expresses her “happiness” at the prospect of connecting the undercover buyers of murdered babies with researchers who are seeking “everything” from 120 babies between 14-22 weeks gestational age.

The next time you hear someone argue that societies morally evolve, just show them these videos from the Center for Medical Progress and remind them that as of August 2015, America has allowed the legal slaughter of 58 million babies, nearly 7 million by Planned Parenthood alone.

When the fake buyers are taken into the clinic’s pathology lab to see the quality of the “specimens,” they are greeted with guffawing from a staffer who jovially explains that they had had “a really long day and they’re all mixed together in a bag.” Just to be clear, it was bloodied, severed body parts from multiple desecrated babies that were all mixed together in a bag like garbage.

From a freezer, this same staff member brings out a 20-week-old “twin,” aborted just that morning and “almost frozen.”

Next we see a staff member sorting through the lungs, trachea, intestines, limbs, and scapula of an 18-week-old “product of conception” in a baking dish—an apt metaphor for the barbarous consumption of human babies by economic cannibals.

Conservatives who subordinate all other political issues to the protection of babies in the womb are often chastised by arrogant political operatives and lawmakers as foolish, naive bumpkins or obstructionists for being “single-issue voters.” Of course, that criticism is never hurled at those who place jobs or foreign policy at the tippy top of the issues that shape their electoral decisions.

Every human who claims to value equality, justice, and compassion should unselfconsciously place the protection of tiny, vulnerable, dependent persons in the womb at the top of their list of political issues.

As many IFI readers know, a federal judge in San Francisco has issued a temporary restraining order to prevent the release of any secretly taped videos that include footage of StemExpress—one of the ghoulish fetal tissue procurement companies that buys baby body parts from Planned Parenthood and sells them to researchers. Pastor Doug Wilson doubts that the video would have been suppressed “if it were a secret video of caddies at Augusta bullying a fellow caddy for being gay.”

The judge, William H. Orrick III, was nominated by President Barack Obama to the federal court in January 2013. According to Wikipedia, Orrick “raised at least $200,000 for Barack Obama and donated $30,800 to committees supporting him.”

This, my friends, is why it is imperative that conservatives support only those congressional and presidential candidates who boldly, articulately, and unashamedly defend the right of preborn babies to be protected from slaughter.  Pay no attention to the fake wizards behind the curtain, pulling levers and promoting lies.