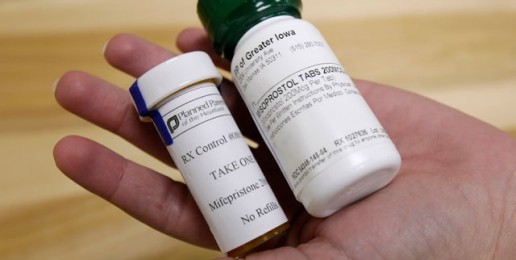 The Obama Administration has announced that it is implementing a mandate that all health insurance plans must include coverage for abortion-inducing drugs. The mandate requires that all health insurance plans must provide coverage for any and all contraceptives approved by the Food and Drug Administration, which includes abortifacient drugs such as Ella and Plan B.

The health insurance edict, announced by Health and Human Services Secretary Kathleen Sebelius, will take effect on August 1st. Sebelius was given authority to issue the mandate under the terms of President Obama’s health care legislation, known as the Patient Protection and Affordable Care Act. That bill empowered Sebelius to determine what “preventative health care services” must be incorporated in all health insurance plans sold and offered in the United States.

The only exceptions to the mandate will be churches, synagogues, and other houses of worship. Religiously-based hospitals, educational institutions, and non-profit organizations will be required to comply with the law effective August 1, 2013.

This means that Christian organizations who offer health insurance benefits for their employees will be compelled to violate their religious convictions by covering the costs of abortion-inducing drugs. This also means that Catholic hospitals and other Catholic agencies will be required to underwrite contraceptive coverage and the costs of sterilizations that violate their religious beliefs.

The expectation is that many Christian employers will cease providing health insurance to their employees rather than pay for drugs that violate their religious conscience.

New York Archbishop Timothy Dolan, President of the U.S. Conference of Catholic Bishops, has sharply denounced the new mandate. “To force American citizens to choose between violating their consciences and forgoing their health care is literally unconscionable. The Obama Administration has now drawn an unprecedented line in the sand. This is a challenge and compromise of our religious liberty.”

Archbishop Dolan also derided the one-year grace period given to religious entities to comply with the law. Sebelius said the one-year delay was offered to accomodate religious liberty concerns. Dolan strongly disagrees. “In effect, the President is saying we have a year to figure out how to violate our consciences.”

Anna Franzonello, staff attorney for Americans United for Life, echoes the Archbishop’s perspective. “The Obama Administration has added insult to injury by providing religious non-profits a year to ‘adapt’ to this coercive mandate. There should be no expiration date for individual freedom of conscience.”

“Essentially, Secretary Sebelius is giving Christian employers a year to get their priorities straight and align their consciences with the anti-life agenda of the Obama Administration,” Franzonello adds.

Under the new health care edict, all health insurance plans issued must provide coverage for FDA-approved contraceptives without co-pay or deductible charges. Drugs like Ella and Plan B, marketed as so-called “emergency contraceptives,” have been endorsed by the FDA.

While these drugs function as contraceptives, they also operate as abortifacients. They are designed to break down the lining of the uterus so that the uterine wall cannot support the implantation, nidation, and continuing growth of a developing embryo. In the eyes of Christians who subscribe to the religious belief and biological fact that human life begins at conception, these drugs can cause a chemical abortion.

The Cardinal Newman Society, a group that advocates for Catholic principles in Catholic universities, blasted the new contraceptive mandate. “It is the greatest irony, that by worshiping the cult of ‘choice,’ the Obama Administration has determined that religious organizations lack the freedom to act in fidelity to their beliefs. The White House has sold the First Amendment for a few pennies of political support from the abortion lobby.”

Become a Sustaining Partner of our Work

You can become a Sustaining Partner with automatic monthly deductions from your checking account or credit card. Click HERE to access the Sustaining Member form. Your gift will go even further than ever because: