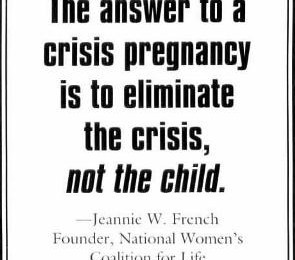 A federal judge has struck down a law adopted by the city of Baltimore regulating pro-life pregnancy resource centers. The ordinance required that crisis pregnancy centers post signs stating that they do not offer abortions or birth control services and do not have licensed medical professionals on staff.

U.S. District Judge Marvin Garbis ruled that the ordinance infringed on the freedom of speech of pregnancy resource centers and amounted to viewpoint discrimination.

“Whether a provider of pregnancy-related services is ‘pro-life’ or ‘pro-choice,’ it is for the provider — not the government — to decide when and how to discuss abortion and birth control methods,” Garbis wrote.

Matt Bowman, attorney for the Alliance Defense Fund, says Judge Garbis made the right call. “This is a huge win for the health of women and a defeat for the profiteering abortion industry that passes laws like this in order to restrict women’s choices in obtaining free abortion alternatives.”

“In sharp contrast to the law-breaking abortion industry, pro-life pregnancy centers have a stellar record of integrity and their opponents can cite no examples of abuse or so-called ‘lying.’ To the abortion industry, saying that abortion is bad is defined as a lie.”

Bowman adds that there is a distinction between the Baltimore ordinance and pro-life informed consent laws. “Laws governing informed consent for abortion rightly regulate information given by a licensed doctor prior to an abortion. Laws against pro-life pregnancy centers attack private unlicensed citizen speech solely because they speak on the issue of pregnancy from the pro-life perspective.”

Under the provisions of the Baltimore ordinance, pregnancy resource centers who failed to comply would have been subject to fines of $200, plus $50 for each day of continuing noncompliance.

It was clear that the ordinance was targeted to harass pro-life pregnancy support centers. A proposed amendment to the bill that would have required abortion clinics to post a sign saying they do not provide abortion alternatives was soundly defeated.

Planned Parenthood Above the Rules?
b
a
x
r