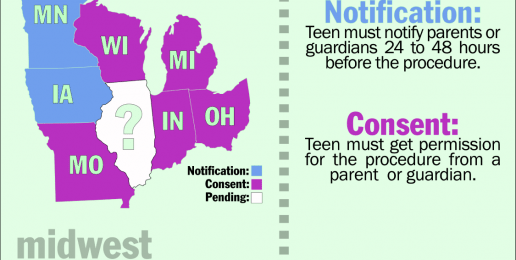 Illinois Roe v. Wade Brewing As Parental Notice of Abortion Act of 1995 is Set to Go Before the Illinois Supreme Court

The issue of a law requiring parents to be notified if their minor daughter is to obtain an abortion has a long and contentious history in Illinois.

The story begins in 1977 when the Illinois General Assembly passed the Illinois Abortion Parental Consent Act. The act, supported by the vast majority of Illinoisans, passed with sound majorities in both houses, but was promptly found unconstitutional by the courts and was never enforced.

In 1983, the General Assembly passed the Illinois Parental Notification of Abortion Act of 1983. It too was found unconstitutional by the courts and was never enforced.

Finally, in 1995, the Parental Notification Act of 1995 became law, which required a parent or guardian to be notified 48 hours before a child under 18 has an abortion. The ACLU immediately obtained an injunction in Federal Court due to unclear rules on the judicial bypass procedure by which a minor girl could obtain an abortion without her parents being notified if a judge approved the procedure. The law remained locked in judicial limbo until for over a decade.

In 2005, the Thomas More Society began implementing Special Counsel Paul Linton’s legal strategy to get the injunction lifted. Representatives of pro-life organizations met with DuPage County State’s Attorney Joseph Birkett in the spring of 2005 to ask him to petition the Illinois Supreme Court to adopt the rules required by the 1995 Act. Birkett agreed and filed his petition in June 2006.

After various delays, Attorney General Lisa Madigan returned to federal court in March 2007 and petitioned Judge David Coar to lift the permanent injunction which had been issued eleven years earlier. After Judge Coar denied the petition, the Thomas More Society intervened in the case on behalf of State’s Attorneys Stu Umholtz (R – Tazewell County) and Ed Deters (D -Effingham County) to press an appeal against the injunction.

In the fall of 2009, after Thomas More Society had filed a writ of mandamus, urging that the law be enforced, and in September of that year, it was enforced for the first time ever—but only for four hours. Once again, the ACLU intervened and convinced a judge to put a temporary restraining order on the law preventing its enforcement.

In the spring of 2010, the Illinois attorney general argued that the Illinois State Constitution protects the fundamental right to abortion even though the constitution was penned in 1970—three years before the monumental Roe v. Wade decision.

Though that request was denied, on March 29, 2010, Judge Daniel Riley dismissed the ACLU’s case and the Thomas More Society joined the case as “friends of the court.”

In 2011, the Illinois Appellate Court reversed and remanded the decision of the Cook County Circuit Court that upheld the Illinois Parental Notice of Abortion Act of 1995 on state constitutional grounds. The Appellate Court did not resolve the ultimate legal issues raised in the case, even though those issues were fully briefed in both the trial and appellate courts.

On November 30, 2011, the Illinois Supreme Court agreed to decide a pair of appeals arising out of the ACLU’s latest challenge of the legality of the Parental Notice of Abortion Act of 1995—an Act whose enforcement the ACLU has stymied through successive court challenges ever since it became a law.