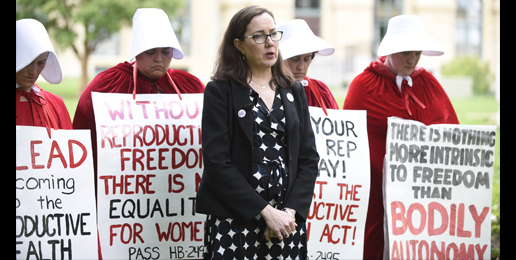 State Representative Kelly Cassidy (D-Chicago) is fighting mad. Why? Because Texas lawmakers had the audacity to pass a law to protect tiny humans with heartbeats from being killed. Cassidy does not believe in states’ rights. Like all other “progressives,” Cassidy is an arrogant totalitarian who believes the entire world must think like her and subsidize the dissemination of her beliefs. And when Cassidy gets mad, she gets even.

On September 14, Cassidy filed a bill in response to the Texas Heartbeat Act. Her bill (HB 4146) is titled the “TExAS Act-The Expanding Abortion Services Act.” Get it? Cassidy has the emotional and moral maturity of an adolescent.

While this bill addresses pregnancies resulting from “sexual assault” and “domestic abuse,” it goes further. If passed it would make it possible for any man in a consensual sexual relationship—including a marital relationship—that results in an “unintended” pregnancy to be sued civilly:

In other words, if passed, any woman may sue any man—including her husband—for impregnating her, even if the sex were consensual. This is retribution for Texans passing a law that the tyrannical Cassidy hates.

It gets worse. In an especially cunning act of vindictiveness, Cassidy and her fourteen feticidal collaborators want any man found guilty of impregnating a woman to be forced to pay at least $10,000, $5,000 of which will go into a state fund to pay the costs of abortions for “pregnant persons”—also known as women to reality-tethered people—who come from states that prohibit human slaughter to Illinois to have their offspring offed:

If the plaintiff prevails in an action brought under this Section, the court shall award injunctive relief sufficient to prevent the defendant from … causing an unintended pregnancy [and] statutory damages in an amount of not less than $10,000 for each act … that causes an unintended pregnancy the defendant committed or aided or abetted, of which not less than $5,000 shall be awarded to the plaintiff and $5,000 shall be placed in a special fund in the State treasury, known as the State Abortion Freedom Expansion Fund, to be used by the Department of Healthcare and Family Services, to pay the costs of abortions for pregnant persons who travel to Illinois from states that prohibit abortions for the purpose of obtaining access to abortions in Illinois; and costs and attorney’s fees.

It’s an especially grievous kind of moral blindness that leads a woman to be as obsessed with the idea that women have a right to kill their children as Cassidy is. Her law punishes men for having consensual sex with women that results in “unintended” pregnancy. This would include women who lie, telling their husbands, significant others, paramours, and one-night stands that they are using contraceptives.

Maybe Cassidy et al. were inspired by Bette Midler who was so enraged that Texans don’t want incipient human lives destroyed that she tweeted,

I suggest that all women refuse to have sex with men until they are guaranteed the right to choose by Congress.

Cassidy’s vindictive plan is a variation on Midler’s plan to punish men for the heartbeat law in Texas. Cassidy’s plan seeks to penalize Illinois men for the decision of Texas lawmakers. Nothing will stop Cassidy from trying to force everyone to submit to the goddesses of the Cult of Child Sacrifice.

Here’s an idea: How about all those empowered, capable, glass-ceiling-smashing women running around in childish pink hats take control of their reproduction—not by ordering the killing of their children—but by not having sex or by responsibly using contraception that they pay for.

Just wondering, does the possibility of winning $5,000 or more provide incentive for women to get “unintentionally” pregnant? And exactly how will women prove they didn’t intend to get pregnant?

As reported by NPR, Cassidy made this nonsensical statement:

Again for the obtuse and anti-science, opponents of abortion are concerned about the bodies of the voiceless and vulnerable whom Cassidy sees as disposable. And destroying living humans is not “healthcare.”

If you don’t already believe the human heart is desperately wicked, Cassidy, who is faux-married to Newt Gingrich’s lesbian activist half-sister Candace Gingrich, offers all the proof you need.

She has been a sponsor or co-sponsor of virtually every law passed pertaining to sexual deviance and child sacrifice, including all the bills that force Illinois schools to promote her assumptions about homosexuality and cross-sex impersonation, including to five-year-old children. I once referred to her as an “instigator of moral mayhem”—which she obviously is. She proudly took that phrase as a badge of honor and emblazoned t-shirts and mugs with it for her fans.

She is not only a propagandist obsessed with imposing her socially constructed sexuality dogma on other people’s children using taxpayer funds, but she’s also a liar in her quest to make abortion through the entire nine months of pregnancy for any and no reason both legal and paid for by taxpayers.

Two years ago, Cassidy lied during a floor debate on her Kill Babies bill when claiming she had a lifesaving “abortion” when in reality, she had had surgery to remove an ectopic pregnancy—a procedure that no one calls an abortion.

In an effort to silence then state representative and current gubernatorial candidate Darren Bailey who opposed her bill, Cassidy demonstrated—again—how manipulative and deceitful she is, saying in an increasingly hostile and aggressive tone,

I will tell you that my abortion was medically necessary. It saved my life. It preserved my fertility. It allowed for the creation of my family, my children who are my world.

Cassidy knew that no white man in this racist anti-white and sexist anti-male climate would dare ask any follow-up questions following her fake-indignant and irrelevant “revelation.”

Here’s what Cassidy didn’t say in her exploitative and misleading response but has said publicly to the Chicago Sun-Times: Her so-called “abortion” followed fertility treatments that resulted in a “blighted ovum” implanted in her uterus and in an ectopic pregnancy, which is when a fertilized egg implants in a fallopian tube rather than the uterus. The termination of an ectopic pregnancy is not referred to as an abortion, and with a blighted ovum, there is no embryo, so her personal story was both false and irrelevant.

Remember Cassidy’s newest legislative insult to decency the next time another lying leftist says it’s no one’s business what people do in the privacy of their bedrooms.

Take ACTION: Click HERE to send a message to your state representative to ask him/her to vote NO to “The Expanding Abortion Services Act,” HB 4146. There is no reason to create a new civil right to bring a civil action against anyone who causes an unintended pregnancy. Nor should state lawmakers create a new fund and state bureaucracy to pay for the abortions of non-residents.