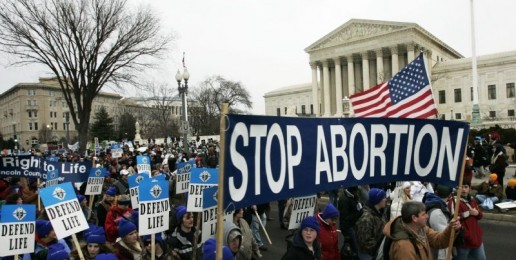 NARAL Pro-Choice America, an infamous pro-abortion organization, is described by Fortune Magazine as “one of the top 10 advocacy groups in America.” NARAL Pro-Abortion America recently published its annual Status of Women’s Reproductive Rights in the United States report. According to this vehemently anti-life group, the United States received a “D” grade for so-called “reproductive rights.”

The report not only graded the nation but also graded states individually. The report card uses a point system based on a n assessment of governors, laws, access to contraceptives, access to abortions, spousal and parental consent, “post viability abortion restrictions” on abortions, state constitutional guarantees of abortion, “contraceptive equity” (a euphemism for state-subsidized contraceptives), and the codification of Roe v. Wadein state law.

The “D” given to our nation means that our federal laws tend to lean pro-life. Those of us who believe that life is sacred from conception to natural death look forward to the day that NARAL assigns the United States an “F.”

The report explains that both state restrictions and federal “anti-choice” laws determine the nationwide grade. These laws include the Federal Abortion Ban, signed into law in 2003 by President George W. Bush; the Federal Refusal Clause of the 2004 Abortion Non-Discrimination Act, which protects health care practitioners who oppose abortion; and abortion restrictions for U.S. military women.

This relatively good news, however, does not extend to the Land of Lincoln. In fact, NARAL lauds Illinois’ state constitution for providing “greater protection for a woman’s right to choose than the U.S. Constitution.” (The U.S. Constitution neither explicitly nor implicitly guarantees the “right” to abort an unborn baby.)

NARAL enumerates several anti-life laws in Illinois, which include requiring health-insurance plans that cover prescription medication to provide the same coverage for contraception, requiring pharmacies to dispense birth control, and providing access to “family planning” to low-income women through Medicaid. The report also highlights the long-litigated case to enforce Illinois’ 1995 Parental Notification Act, which remains in legal limbo and unenforced.

The NARAL report underscores the unacceptable reality that Illinois’ laws and far too many lawmakers favor abortion. After the tabulation of points, NARAL ranks Illinois as the 19th most anti-life state in the nation — with North Dakota ranking 50th and California placing 1st in this dubious competition. NARAL also gave the state of Washington an “A+,” while Maine, Oregon, Maryland, and Connecticut received an “A.” States that received an “A-” are Alaska, Nevada, New Hampshire, New Jersey, New Mexico, New York and Vermont.