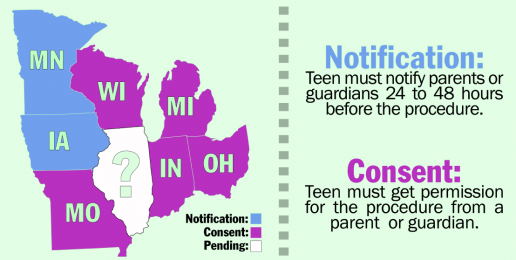 According to a Chicago Tribune article, Dr. Allison Cowett and the Hope Clinic claim that “the notification law would harm minors by preventing them from obtaining safe abortions or force them to carry their pregnancies to term.” This is an ironic claim coming from a clinic that is being sued for a botched abortion that left a now 20-year-old woman sterile. According to LifeNews.com, “Antoinette Blanton, who is 20, filed a $50,000 against the abortion center saying the failed March 2006 abortion caused her to be sterile. According to the lawsuit, abortion practitioner Allen S. Palmer, of Bridgeton, failed to remove the entire unborn child during the abortion procedure.”

Dr. Cowett, a committed pro-abortion advocate, and the Hope Clinic further claim that “Others (minor girls) will be beaten or thrown out of their homes when their parents learn of their pregnancy and planned abortion.” But the judicial bypass option is available to any girl who fears such a response. It hardly seems fair to deny all loving, compassionate parents a right to help their daughters make a decision regarding major surgery that carries both serious physical risks and potentially long-term emotional consequences because some girls may choose not to avail themselves of the judicial bypass option.

Dr. Cowett is an assistant professor of Clinical Obstetrics and Gynecology at the University of Illinois College of Medicine in Chicago and director of the University of Illinois at Chicago’s Center of Reproductive Health. Her research “focuses on abortion in the 2nd trimester, factors affecting women’s contraceptive choices, and access to family planning services.” According to her biography, she is “active in community-wide efforts to forward a legislative agenda that champion’s women’s reproductive freedom.” Apparently, she wants to champion teenage girl’s right to kill even younger pre-born girls through both legislative and judicial means.

And she’s willing to forge an unholy alliance with a clinic that has long been criticized by pro-life warriors for myriad offenses against humanity and sound medical practice. Retired ob-gyn nurse Angela Michael and her husband Daniel have been struggling mightily for seventeen long years to expose the nefarious deeds of the grossly misnamed “Hope” Clinic. According to Mrs. Michael, approximately 80 percent of abortions come from across state lines which suggests that most of the abortions are performed on minor girls. Illinois has long been the Midwest’s abortion mecca for underage girls, since all of the surrounding states have parental notification laws. The Hope Clinic is just a hop, skip, and short car ride from Missouri where underage girls would need to notify their parents prior to procuring an abortion. To learn more about the Hope Clinic, peruse Angela and Daniel Michael’s website Small Victories Ministries.

At least as troubling is that Hope Clinic performs the utterly barbaric practice of late-term abortions. Dr. Yogendra Shah is the George Tiller of Hope Clinic. According to the Thomas More Society in Chicago “Shah is perhaps the Midwest’s most wicked abortionist. He’s the notorious serial killer who once clogged the municipal sewer system with the arms, legs, rib cages, and heads of aborted babies. Municipal officials were shocked. They traced the body parts to Shah’s ghastly abortion mill, the so-called “Hope Clinic for Women” in Granite City, Illinois . . . he kills about 10,000 babies a year. No wonder he can afford an expensive watch and a Mercedes and a Lexus.” This is the same man who “tried to run Daniel over. . .And then. . . glared at Angela. . . and shouted, ‘Die, Angela, Die!'”

One can’t help but wonder if the chief concern of doctors at Hope Clinic is really the health and safety of underage girls. Someone needs to look into how much money teen abortions generate for the Hope Clinic.

And we all need to pray fervently for two things: first, that the ACLU, Dr. Allison Cowett, and Hope Clinic lose their lawsuit, and second, that the Hope abattoir closes its blood-stained doors forever.