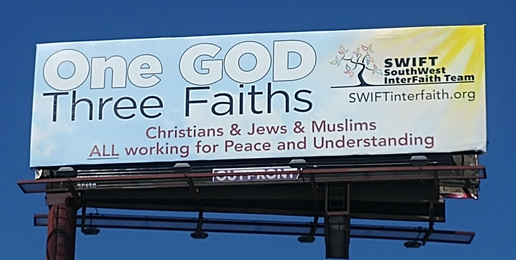 Islam is a religion of profound contradiction.  Commonly portrayed as a “religion of peace,” it is simultaneously responsible for the majority of terrorist attacks around the world.  While claiming to advocate high ethical standards, the Muslim faith also advocates intentional deception under the doctrine known in Arabic as “taqiyya,” which encourages believers to deliberately mislead non-Muslims if it will further the faith.

Recently billboards have appeared over I-80 sponsored by an organization which calls itself SWIFT (Southwest Interfaith Team).  The billboards proclaim: “One God: Three Faiths Christians and Jews and Muslims ALL working for Peace and Understanding.”  SWIFT is composed of a group of 18 congregations throughout the south and southwest suburbs of Chicago, including seven Catholic churches and five liberal Evangelical churches.  The headline of a newspaper article about the organization misleadingly states: “They’re on their path to God like I am.”  In truth, there are fundamental theological conflicts between Christians, Jews, and Muslims that cannot be reconciled, and which have caused untold bloodshed throughout the centuries.

Another example of taqiyya is the imam Muhammad Shahidullah, who is active in interfaith outreach.  He has addressed the New York Police Department and has visited the White House as part of an interfaith delegation.  He has participated in an event at New York’s 9/11 Tribute Museum and has attended the United Nations World Interfaith Harmony Week.  Shahidullah has been recognized by the New York City Council as “an outstanding citizen, one whom is worthy of the esteem of both our community and the great City of New York.”

The Investigative Project on Terrorism, however, reports that Shahidullah, a Bangladeshi native who lives in Queens, New York’s Jamaica neighborhood, is also responsible for propagating extremist and Islamist propaganda through his website Dawah USA.  Included on his website is American-born al-Qaida cleric Anwar al-Awlaki’s infamous “It’s a War on Islam” speech, which portrays counter-terrorism efforts as “a war against Muslims and Islam.”  Awlaki was killed in a 2011 drone strike, but his online voice continues to radicalize Muslims.

Also found on Shahidullah’s Dawah USA website are speeches by numerous radical Islamic preachers, including the leader of the Virginia Jihad Network, Ali al-Timimi, who advocates the religious transformation of the United States: “if Muslims live in a non-Muslim society … then they could make the country Islamic themselves.”  Speeches by al-Timimi’s mentor, Abu Ameenah Bilal Philips, are also featured on the site.  Philip rails against the “concept of globalized western civilization as portrayed in secular democracy … (which is ostensibly) being pushed down the throats of the rest of the world.”

A speech by the late Pakistani Islamist Israr Ahmad warns against the so-called “Jewish Conspiracy,” and promotes “not only reviving the Qur’an-centered Islamic perennial philosophy and world-view but also reforming the society in a practical way with the ultimate objective of establishing a true Islamic State, or the System of Khilafah [Caliphate].”

An e-book entitled Towards Understanding Islam may be downloaded from the Dawah USA site, which defines jihad as “a war that is waged solely in the name of Allah against those who practice [sic] oppression as enemies of Islam,” adding that “If the country attacked has not enough strength to fight back, then it is the religious duty of the neighboring Muslim countries to help her; if even they fail, then the Muslims of the whole world must fight the common enemy.”

Dawah USA’s president Shahidullah is also chairman of the board of ITV USA, which describes itself as “A Global Dawah Channel” seeking “to propagate the inherent love and peace that Islam embodies.”  ITV USA furthers the deceptive practice of taqiyya by attempting to lull Western Christians into a false sense of harmony and mutual coexistence.

The truth is that one can scarcely find a greater manifestation of warlike aggression and oppression than that which has been regularly practiced by Islam since the seventh century.  Jihad – “a holy war undertaken as a sacred duty by Muslims” – is responsible for the slaughter of countless millions of “infidels” merely for refusing to bow the knee to Islam.

Let us hope and pray that the non-Muslim world will remain vigilant so that we do not unwittingly fulfill the Biblical warning: “When people are saying, ‘Peace and security,’ then sudden disaster comes upon them” (1 Thessalonians 5:3).

Do Christians and Muslims Worship the Same God? Absolutely Not. Here’s Why (by Robert Spencer)

Timothy J. Dailey
Timothy J. Dailey has senior-level research and writing experience with major Christian ministries, including working in the public policy arena in Washington DC. He has been a writer and editor of commentaries for a nationally-syndicated radio program. He has taught on the college-level both at home and abroad, including eight years in Israel teaching the historical, geographical, and archaeological background of the Bible.  Dr. Dailey’s many books draw upon insights which are drawn from the author’s extensive training, including a Ph.D. in Religion and Ethics, as well as experiences gained through more than a decade of overseas cross-cultural ministry. Having...
Full bio and more from Timothy J. Dailey