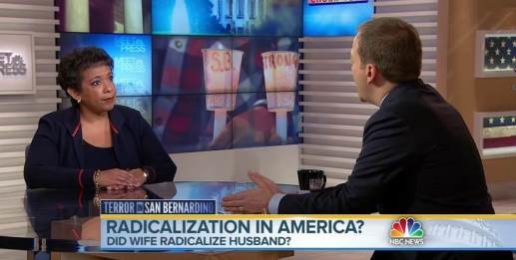 Yesterday on Meet the Press with Chuck Todd, Attorney General Loretta Lynch announced that the FBI would be releasing a “partial transcript”—no audio—of Omar Mateen’s phone calls “with law enforcement from inside the club. These are the calls with the Orland PD negotiating team who were trying to ascertain who he was, where he was, why he was doing this, all the while the rescue operations were continuing.

When Todd asked what information would be left out of the edited transcript, Lynch answered:

“Well, what we’re not going to do is to further proclaim this individual’s pledges of allegiance to terrorist groups and further his propaganda… We’re not gonna hear him make his assertions of allegiance.”

It’s much easier for “progressives” to perpetuate their pernicious lie that theologically orthodox Christians are the cause of the Orlando massacre if the government censors the words of the shooter in which he tells America exactly what ideology moved him to murder 49 people.

And since when does the publication of primary sources of historical information constitute furthering “propaganda”?