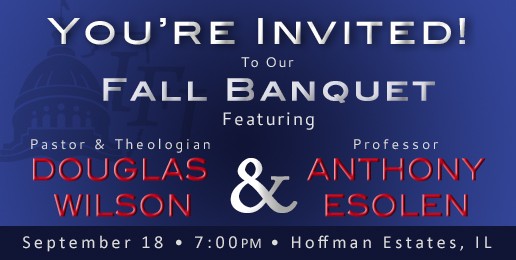 For the first time ever, IFI will be hosting two esteemed speakers, both of whom are prolific authors.

Anthony Esolen is a professor of English at Providence College in Rhode Island, senior editor at Touchstone Magazine and a contributor to both LifeSiteNews and Crisis Magazine.

Douglas Wilson is the senior minister at Christ Church in Moscow, Idaho; faculty member of New Saint Andrews College; one of the editors of the homeschooling Omnibus series; and apologist extraordinaire whose debates with famed atheist Christopher Hitchens were documented in the film Collision.

There are no better speakers than Professor Esolen and Pastor Wilson to help shed light on the path forward for Christians in the aftermath of the arrogant and foolish Supreme Court same-sex faux-marriage decision. They demonstrate the kind of courage, wisdom, vision, and boldness desperately needed in such a time as this.

How should Christians think about and respond to the many challenges that face us as parents raising children, neighbors extending hospitality, citizens engaged in self-government, and employers and employees in a culture increasingly hostile to truth? What is morally permissible for Christian citizens and what is impermissible? What are our obligations to God and society?

Professor Esolen and Pastor Wilson will offer answers to these vexing questions, and they will answer questions clearly. No ambiguous, strategic equivocating.

Here is a sampling of the kinds of things we may hear from Professor Esolen and Pastor Wilson.

Kennedy has gotten everything wrong, as ambitious sentimentalists are wont to do. Man is worthy of our reverence as man. But his thoughts are worthy of our reverence only insofar as they are true. His deeds are worthy of our reverence only insofar as they are virtuous; and virtue is grounded in truth. I must revere the thief as man; I must not revere him as a thief, because he would be a better man, and more the man he was made to be, were he not a thief. I must revere the sodomite as man, not as sodomite, because he would be a better man if he could integrate his desires and his deeds with the reality of his body. The truth of the sexes, male and female, is stamped upon their bodies, so clearly that even children understand it. To treat a man with reverence is to honor that manhood, what is given to him in the structure of his mind and body; it is not something he has chosen. To treat a man as if he were a woman is to do violence to that manhood and that body. Need we spell this out?

Here finally I hear a soft and simpering voice, the last gasp of the lie. “But what harm will it do to pretend that the two men are married, even if, strictly speaking, they aren’t? Can’t we simply shrug and go about our business?” No, we can’t. Justice Kennedy is a kindly sentimentalist, but kindliness divorced from truth is no real virtue….Ignoring reality, ignoring the law of our being, ignoring the peculiar goodness of the sexes, is always foolish, even when it is not downright evil. You may pretend that such truths do not exist, just as you may pretend that you can suspend the law of gravity as you step off the edge of a cliff. Nature, and Nature’s God, are not required to oblige your fantasy.

And Christians of all people should remember the one whom Jesus called the father of lies.

In the aftermath of the Obergefell decision by the Supreme Court, a lot of Christian parents are reeling. They know they must do something, but what can they do? The decision was so high-handed, so arbitrary, so insolently rendered, that it would be easy to assume that there is nothing we can do about it down here at street level.

But this is false. There are many steps we can take, and some of the first ones are steps we must take. Here is one that millions of parents could take in just a small number of weeks—they could pull their kids out of the government school system.

The necessity of doing this has been growing increasingly obvious every year, and now the need for it is open, manifest, and pretty much on fire. What can Christian parents do? If their kids are already receiving a Christian education, they can be encouraged and stand fast — and they can use the opportunity to openly appeal to Christian friends who still have their kids in the government school system. And if they themselves still have kids where their kids ought not to be… well, this is the perfect opportunity to bolt. If anybody asks why, a reasonable answer would be anything in the neighborhood of “fire on the mountain, run, boys, run!”

…If your children remain in the government schools, there is now no legal way for them to be taught any normal view of human sexuality. And, depend upon it, they will be taught the other kinds.

We at IFI look forward to seeing you on September 18! Bring your older children, parents, friends, neighbors, and church leaders. This will be a very special night.