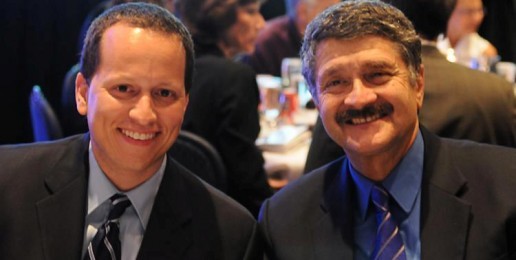 David E. Smith is the Executive Director of Illinois Family Institute, launched in 1992 as a nonprofit private educational foundation. Their Mission Statement is “to strengthen the family and restore traditional Judeo-Christian values to our culture by education, equipping, and networking men, women, and churches for the battle to protect the family.

Its Statement of Faith accepts the “Bible to be the infallible, authoritative Word of god and inerrant in its original autographs” and acknowledges “that all resources are a gift from God and hold ourselves to the highest standards of accountability to Him and to those who support our efforts.”   www.illinoisfamily.org

Michael Medved, author critic, a nationally syndicated radio host, bestselling author, and veteran film critic, was the Keynote Speaker.  Medved has a daily three-hour broadcast that reaches more than 3.5 million listeners on nearly 200 station across the world.  His show consistently ranks as one of the top ten political talk shows in the United States and can be heard every weekday on AM560 from 2pm to 5pm.

Recent books by Michael Medved include “HOLLYWOOD VS. AMERICA,” a searing indictment of the entertainment industry, and “SAVING CHILDHOOD:  PROTECTING OUR CHILDREN FROM THE NATIONAL ASSAULT ON INNOCENCE, written in collaboration with his wife, Dr. Diane Medved, a clinical psychologist.

Prior to remarks made by Executive Director David Smith in which he summarized the good and bad legislation that passed through the Illinois General Assembly in the current year, Dr. Mark Zurnhagen, as Abraham Lincoln, presented Lincoln’s “2nd Inaugural Address” of Saturday, March 4, 1885, which ends with these ever-lasting words which span centuries:

“With malice toward none, with charity for all, with firmness in the right as God gives us to see the right, let us strive on to finish the work we are in, to bind up the nation’s wounds, to care for him who shall have borne the battle and for his widow and his orphan, to do all which may achieve and cherish a just and lasting peace among ourselves and with all nations.”

Unacceptable Legislation:
Tax increases were rammed through during the 2010 Lame Duck Session.  Despite these tax increases Illinois is still spending $2.9 billion more than it takes in.
Legalization of same sex marriages.
Anti-bullyingly Act.  Signed on the morning of the Gay Pride Parade in Chicago.

Legislation and Actions of Merit: Bill that would have required the registration of home-schooled students was killed. The gambling bill remains unsigned.  Recently 205 pastor sent Governor Quinn a bill to veto the gambling legislation on his desk which legislators want passed to raise state revenue.
Legislation Pending (HB 3027: Mandate that grades 6 through 12 in Illinois teach comprehensive sex education which would encourage the use of contraceptives with little emphasis on abstinence.

David Smith believes that the make up of the General Assembly must change in order to affect positive change, such as legislation that would define marriage as between one man and one woman.  A law defining marriage, although introduced every year, is not allowed to be voted out of the Rules Committee.

In conclusion Smith told his guests that “all must give in our battle,” followed by, “Are you ready?”  Smith then reminded all that “so much is on-line with families.”

Cisco Cotto, as the Master of Ceremonies, introduced Guest Speaker Michael Medved.   Cotto got his start in radio at the age of 22 at SMAQ-AM in Chicago.  From there he spent more than a decade as a news reporter, anchor, and talk show host at WIND-560AM and WLS-890AM in Chicago.  With a Master of Divinity degree from Moody Theological Seminary, Cisco Cotto is the Lead Pastor of Village Church of Oak Park.

With these words of praise, Cisco Cotto introduced Michael Medved:

“Just as he is in real life, Michael Medved is not only intelligent, but the kindest, the most knowledgeable, and the most humble of any radio host that I have ever come in contact with.”

Upon taking the podium, Michael Medved countered Cisco’s final quality ascribed to him in a remark that prompted a smile from all, included Dan Proft who was seated at my table, host of a week day WLS-890AM talk show co-hosted by Bruce Wolf.  “Radio hosts are not a group known for their humility.”

Medved’s beginning remarks were of a general nature but fitting to the present political climate.  He spoke of those Occupying Chicago as “loser” or “land creeps” who will help insure that we will have a one-term president.

Medved spoke of a nation that is in desperate shape and how in his lifetime, with the exception of the year Martin Luther King was assassinated in 1968, there was never a time when so much worry and fear exsisted about the future as is present today.

According to Medved, a change of leadership must happen in Washington, D.C. and in Springfield, IL in the November 2012 elections.  The focus must be on jobs and the economy.  Presently 40 million are living in poverty and are having a difficult time.

Medved then went on to explain that an economic recovery will only happen if it is based on social and values issues.  One is not possible without the other.

Following are the three values issues necessary for economic recovery:  1) Family.  2) Morality.  3) Confidence.  Each was explained in detail by Michael Medved.

1.  A Stable Family Unit:  There is a difference between single and married men.  It does make a difference when men marry.  70% of men currently in prison for violent crimes grew up in fatherless households.  At the core of our economy is the family for economic progress and civilization.  With family stability men are more likely to be reliable employees.  Government intrusion usurps the role of the family in what the family should be providing.

2.  Morality is part of the American success story:  At this nation’s founding we were the most religious country in the world.  Early on Americans could go to their local priest, minister or rabbi to have problem resolved.  There must be a renewal of morality; an understanding of what is right and wrong and not what is legal or illegal.  Although this nation has only 6% of the world’s population, we have 70% of its lawyers!

The Robber Barons in history were misrepresented.  Andrew Mellon was given as an example of a Robber Baron who build 3,200 libraries across the country.  He didn’t rob from any one.

To be remembered is that what we do is being watched by God.  Described as deplorable legislation is what the governor of CA, Jerry Brown, has allowed to happen:  The right to change gender and to note that change on both a drivers and birth certificate.

Other examples given of government rewarding bad behavior that most American knows is bad is the right to punish the rich as if it’s bad to be rich and people who work to build businesses deserve to be punished, while those who are camping out should be rewarded.

3.  Confidence needed to risk both time and money:  President Obama is destroying confidence of the American people by going around apologizing for our nation instead of praising what is good about America.  Wall Street shouldn’t be blamed, instead blame ourselves.  Depending on big government for our needs doesn’t build confidence in ourselves to succeed.  Success might take several failures. When Government convinces people that they can’t manage their own lives by providing for themselves, that they are helpless without government, dependency is created instead of confidence.

Medved described as the “hunger hoax” the SNAP program that distributes food stamps to 46 million individuals, even some in graduate school.

Michael Medved’s closing comments centered on how to restore the values issue.   Michael used this quote from his friend, Rabbi Lappin, to explain what must be done:  “People either worship the big ‘G’ (God) or the little ‘g’ (government). We need less government and more God.”

Other poignant thoughts:  Living together is no longer an issue of discrimination.  It makes no difference whether a couple is living together or married, yet marriage involves a partnership with God the Almighty.  There must be a return to marriage as a sacrament.

The idea of right and wrong comes from a place other than a code book, of which there are 70,000 in the IRS.  Morality comes from the One who is watching over us.

God formed us.  We did not come into the world as accidents.  This is why the abortion issue is so critical.  The unborn does have a soul.  It also has DNA makeup and a beating heart.

Michael Medved’s final message was tied to an article he had read about Steve Jobs while flying to Chicago for the Illinois Family Institute event.  Given up for adoption by a young graduate student, Steve Jobs might never have come into this world after Roe vs. Wade was passed in 1973.

Once again all were reminded that God creates all human beings and how religious faith goes hand-and-hand with business success.  Faith also gives us the confidence that we are not victims, that we are not down-trodden, but above all we are all Americans and should be proud of our country.

Debbie K (Kraulidis) and The Freedom Band was a pleasing and inspirational attraction at the Illinois Family Institute event.  The song, “Are You Ready? This is the Time”, with words by Debbie Kraulidis, was introduced and featured this appropriate and meaningful Chorus which followed each of its two verses:  www.debkmusic.com