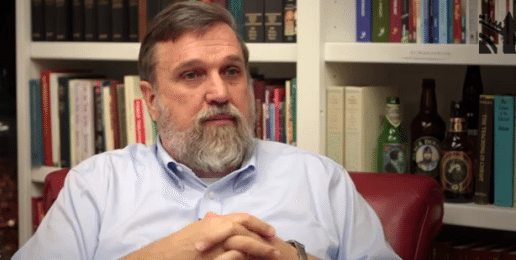 A troubling and unbiblical notion has infected the church in America. Christians falsely believe that the Bible teaches that Christians should always and in every context speak “nicely,” and by “nicely” they mean in ways that listeners don’t find objectionable. Too many Christians falsely believe that they are prohibited from being angry; or from using sarcasm, satire, or other strong language; or that they are prohibited from saying anything that offends people. By adopting this unbiblical notion, Christians are voluntarily relinquishing one of our most powerful persuasive tools: rhetoric. We have relinquished the very tool that enables us to expose the unfruitful deeds of darkness that so poison the American cultural landscape, robbing children of their innocence, modesty, and rights.

Thankfully, we have Pastor Douglas Wilson to offer the church a much-needed corrective. Through his bold, incisive, piquant, and often hilarious truth-telling, he not only exposes the folly and wickedness of the sexual revolution, but also teaches us how we may and should do likewise.

Along with Professor Anthony Esolen, Pastor Wilson will be speaking at our upcoming very special annual fall banquet on September 18th in Hoffman Estates.  (Click HERE for a banquet flyer.)

Here is a saucy sample of the delightful and brilliant rhetorical meals served up by Pastor Wilson for you to savor:

I was recently asked how the radical ethic taught by Jesus — if someone forces you to go one mile, go with him two — relates to baking a wedding cake for a same sex mirage ceremony….

The first thing to deal with is the very glib equation of floral arrangements, wedding cake baking, and photography with carrying a Roman soldier’s bag two miles instead of one. Back in the day, everyone who saw that civilian carrying the bag would know that the civilian had been pressed into service, and further, there is no sin involved in carrying a bag. The law allowed the Roman soldier to make someone carry his pack for a mile, no more. When the follower of Christ went the second mile, this was a means of assuming the center, taking control of the situation.

When Jesus healed the ear of Malchus, He was doing precisely this sort of thing. This armed entourage came out to arrest Him, and Jesus quietly assumed command of it. What Jesus was teaching His disciples was a way — everything else being equal — of assuming the center. When Jesus stood before Pilate, bound and beaten, He was in control of the situation, and Pilate was not. Pilate was the one who got scared.

But nobody thinks that this teaching of Christ means that there is never a point of simple resistance. For example, Jesus simply refused to answer Herod at all. Herod wanted Jesus to do a trick. Why didn’t Jesus apply His own teaching here and do two tricks?

Before counting how many, one or two, we need to reflect for a moment on the nature of the thing being demanded.

If someone demands that you deny Christ, your duty is not to deny the Lord twice. By this reasoning, Peter would have been an exceptional disciple the night of Christ’s betrayal. He denied Him three times! No one believes that if Roman law required a pinch of incense be offered to the genius of the emperor then your religious duty before God would be to offer two pinches, or better yet, a fistful. And who thinks that when the sackbut sounded in ancient Babylon, the duty of Shadrach, Meshach, and Abednego was to starting bobbing up and down like crazy, falling down before the great image more than anyone else there.

Who would pay any attention to a meme that showed a young Quaker walking into boot camp? “And if they conscript you for four years, sign up for an extra four-year hitch.”

As I have already written, this issue is entirely and completely over a demand for approval. The homo-jihad is not demanding that we agree to function in the same economy together with them. We are more than willing to do that. Rather, they are demanding — not suggesting — that identification of their perversion with sin be made against the law. This includes everyone, everywhere, and it includes pulpits. So when when they say “that would never happen,” it should be pointed out that Christians are starting to get smart. We don’t believe anything you say anymore.

So they are demanding that on such occasions where our participation in this same economy becomes tantamount to approval of the sin, and consequently a violation of our conscience, that we be required to violate our conscience. Their lusts trump our conscience.

They have already decided what the public conscience must be like, and they are prepared to enforce it. So take this sentence for a prime example:

Now do you agree with that sentiment? Notice — before you agree — that I conveniently put in blank spots so that you couldn’t get your partisan frenzy on prematurely. You don’t know what phrases I am going to put in there. If you agree with it in order to justify the current homo-frenzy, the current two-minute homo-hate, then what shall you do when I then say, “No, actually I was talking about ‘race-mixing’ and ‘opening up his private restaurants to whites and blacks together’”?

When we preach the gospel, if we are to preach it the way it was preached by the apostles, our message will be “repent and believe.” But these are verbs that require a direct object in order to make any sense at all. Repent of what? Believe in what? The message of the Christian faith is incoherent unless it is repent of your sins, which includes homosexual sins, and believe in Jesus, who summons you to a life of discipleship, which includes sexual discipleship. You cannot outlaw a message of “repent and believe” without outlawing biblical Christianity, which our tolerance cops are well on the way toward doing.

This is why the professions that glorify an event — that make it look good and seem like a real celebration — are in the forefront of this battle. We are talking about glory, and since same sex unions are lame, they need everyone to applaud enthusiastically. This is the only way to compensate for being so lame. Just one dissenter wrecks the effect, and so the kind of effect they want is the kind you can see in the stands at North Korean missile parades. I have never seen any protesters at those. Such unanimity!

The old Jim Crow laws discriminated against blacks, but at least everybody recognized what they were doing. If confronted about it, they would acknowledge that this was in fact the point. Our new laws are a toxic mixture of this same despotic impulse along with high levels of epistemic confusion. They must discriminate, but refuse to ever admit that this is what they are doing. But because laws are discriminatory, this is why the foundation of our nation’s laws must be the laws of God. And by “God” I mean the Father of the Lord Jesus.

And so we have gotten to the point where the few remaining sincere liberals have to be deeply humiliated by the behavior of their homo-homies. They have become what they have always professed to detest, and this is a cause of some consternation to the sincere liberals I mentioned a moment ago, all eight of them. But I bet a clever graphic design guy could make an exclamation point for those COEXIST bumper stickers out of some lynched evangelical florist. That should fix everything. And if the clever graphic design guy didn’t want to design something like that . . . well, let’s just make him, shall we?

Please order your tickets now for this rare opportunity to hear from Pastor Douglas Wilson about what needs to be said in the public square and how we may say it. Bring your family, friends, church leaders, and neighbors to hear both Pastor Wilson, who is coming from Moscow, Idaho, and Professor Esolen, who will be coming to us from Providence, Rhode Island.