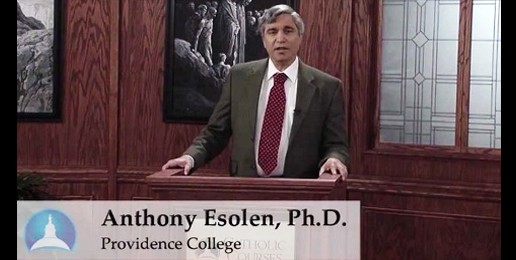 Professor Anthony Esolen is one of America’s cultural treasures. He writes about moral decline in America with insight, boldness, and eloquence—no timid, hesitant, evasive speech from Professor Esolen. Many people—though not nearly enough—know Professor Esolen through his writing for LifeSiteNews, and Touchstone and Crisis Magazines.

IFI has the distinct honor and privilege of hosting Professor Esolen along with Pastor Douglas Wilson at our upcoming very special banquet, which takes place in just 4 1/2 short months on September 18, 2015.

Those like me who read everything they can by Professor Esolen will welcome this opportunity hear him in person, and those who are unfamiliar with his work must come to be introduced to this remarkable cultural warrior.

To whet your appetite for bold, impassioned truth-telling, here is a recent piece Professor Esolen wrote on the pernicious lies with which leftist sexual revolutionaries have poisoned America:

The latest apologists for the Sexual Revolution – that great swamp of sewage backup, human misery, family breakdown, squalid entertainment, and lawyers – have been saying that the most radical anthropological breach ever known to man, the detachment of marriage from childbirth and the plain facts of nature, will have no effect (none at all, not to worry) on marriage and childbirth and family and community life.

To which I reply, “Haven’t you said that before?” About what exactly have the sexual revolutionaries been right? Which of their non-predictions has been confirmed?

They told us that liberalization of the divorce laws – the no-fault divorce that libertarians so heedlessly pushed – would have no effect, none at all, not to worry, upon the frequency of divorce. The new laws would only make divorce less painful to the couple, and consequently less painful to the children. For there are such things as “good” divorces.

By a miracle of sympathy and maturity beyond their years, children would be happy to find their parents happy. In fact, they could never be happy otherwise. No one troubled to ask how their parents could possibly be happy in the teeth of their children’s sorrow. Well, the revolutionaries were wrong about that. Or they were lying; one or the other.

They told us that “everybody was doing it,” with “it” growing gradually more immoral and unnatural, basing their assertions upon research conducted by that pedophile and fraud, Alfred Kinsey. Therefore, they said, to smile upon fornication was not to change anything, except to relieve everybody from reproach, and allow them to do open and honestly what they had been doing dishonestly and in secret.

In one generation the relations between the sexes were utterly transformed, so that girls (and boys too) who wanted to practice the ordinary virtue of prudence, and even the more difficult virtue of chastity, were “immiserated,” left out, lonely. In the old days, a boy’s heart might leap if the girl gave him a kiss. Now he can hardly feign a bit of affection unless she brings him to climax. Well, the revolutionaries were wrong about that too. Or they were lying.

They told us that pornography was an innocent pastime for a minority of people interested in it. It had nothing to do with violence. It would not coarsen the culture. You would be able to keep children away from it. No effect, none at all, not to worry. Need I comment on this one? They were wrong, or they were lying.

They told us that the Pill would result in fewer children being conceived out of wedlock, and that liberalizing the abortion laws would have no effect, none at all, not to worry, upon the number of women seeking them. Pope Paul in Humanae vitae predicted otherwise. Now forty percent of children in America are born out of wedlock, most of them to grow up without a stable home. And by the testimony of the Supreme Court itself, abortion has become so intimate a part of a woman’s life, as the failsafe against the misfortune of making a child when you do the child-making thing, that it cannot possibly be scaled back now. Again, the revolutionaries were wrong, or they were lying.

I should say they were lying again, because the evidence they brought before the courts had always been a mass of fabrications.

They told us that little children introduced to sex by sweet and gentle older people would suffer no great harm by it, unless parents overreacted. They had for a while to forget that they ever said it, but now that the Catholic Church has cleaned house, they are forgetting that they forgot it, and are starting to sing the same old tune: no harm, none at all, not to worry. They were and are wrong, or they were and are lying.

They told us that the ERA, which was never ratified but which has been litigated into law anyway, would not result in such absurdities as women being sent into combat, the end of single-sex public colleges, unisex bathrooms, and the normalization of homosexuality. No effect, none at all, not to worry. They were wrong about that, or they were lying.

What have they gotten right? Have the relations between men and women ever been more suspicious, more fraught with anger and shame? according to their own testimony, our colleges are swarming jungles of assault and rape. That was not so before the revolutionaries did their work.

and purportedly painless suffocation every day, in every hospital in the country. No effect, none at all, not to worry.

It could not possibly have any effect on such things, because, we were told, the behavior in question was perfectly natural, engaged in by perfectly healthy people. It was not an unnatural moral and psychological disorder, impossible to render natural, which could only be shored up by coercion. No effect, none at all, not to worry. And by the way, agree or be destroyed.

When have they ever been right in their predictions? Why should we trust them now?

The IFI Banquet is a rare opportunity to hear Professor Esolen, who is coming from Providence, Rhode Island and Pastor Wilson, who is coming from Moscow, Idaho. Please come and bring your family, friends, church leaders, and neighbors to hear these two brave, brilliant, inspiring men of God who through their uncompromising commitment to transcendent, eternal, unchanging truths will inspire us all to do more and better.

You Are Invited!
b
a
x
r