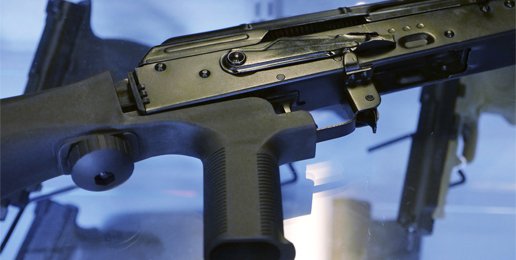 Deerfield, Illinois, an affluent suburb on Chicago’s North Shore, is making national headlines for passing an amendment to a 2013 village ordinance that regulates the storage of guns. The amendment mandates a ban on “certain types of assault weapons and high-capacity magazines,” and grants to the “police chief or his or her designee” the authority to “confiscate” any of the banned weapons if they are not “removed, sold, or transferred.” In addition to gun confiscation, failure to comply will result in fines of $250-1,000 per day. Deerfield residents have until June 13 to get rid of the banned guns.

Oddly, according to the Chicago Tribune, on Monday night when the vote was taken, “the trustees did not discuss their reasons for supporting the ordinance.”

Trustee Barbara Struthers said she knew of people who were opposed but chose not to come and speak because it would subject them to ridicule in the community.

One resident who wasn’t too intimidated to oppose the amendment was Andy Rogers who spoke at previous board meetings. Rogers challenged the need for such a ban, saying that he “wasn’t aware that Deerfield had an assault weapons problem” and that “assault weapons have essentially been outlawed since the National Firearms Act of 1934.” In response to a community member who claimed that a “well regulated militia meant that firearms could be banned,” Rogers explained that “the meaning of regulated is ‘to make regular’—meaning that everyone had the same training, same weapons, etc.”

Attorney Daniel J. Schultz elaborates on this understanding of the Second Amendment:

The overriding purpose of the Framers in guaranteeing the right of the people to keep and bear arms was as a check on the standing army…. [A]s to the term “well regulated,” it would make no sense to suggest this referred to a grant of “regulation” power to the government (national or state), when the entire purpose of the Bill of Rights was to both declare individual rights and tell the national government where the scope of its enumerated powers ended…. George Mason, one of the Virginians who refused to sign the Constitution because it lacked a Bill of Rights, said: “Who are the Militia? They consist now of the whole people.”

[T]he right to keep and bear arms is expressly retained by “the people,” not the states. Recently the U.S. Supreme Court confirmed this view, finding that the right to keep and bear arms was an individual right held by the “people,” — a “term of art employed in select parts of the Constitution,” specifically the Preamble and the First, Second, Fourth, Ninth and Tenth Amendments. Thus, the term “well regulated” ought to be considered in the context of the noun it modifies, the people themselves, the militia(s)…. Since the fundamental purpose of the militia was to serve as a check upon a standing army, it would seem the words “well regulated” referred to the necessity that the armed citizens making up the militia(s) have the level of equipment and training necessary to be an effective and formidable check upon the national government’s standing army.

Village resident Larry Nordal predicted what will be next for Deerfield:

“The [2013] ordinance to store firearms was only passed for one reason…. That was to have an amendatory vehicle that could be used in the future for just this purpose so you could banish assorted firearms in the future. First it’s going to be assault rifles. (There will be) new bans in the future. It’s just a matter of time.”

And this is how “progressives” use incrementalism and the cowardice of conservatives to rip out threads from the fabric that holds our republic together: the Constitution.