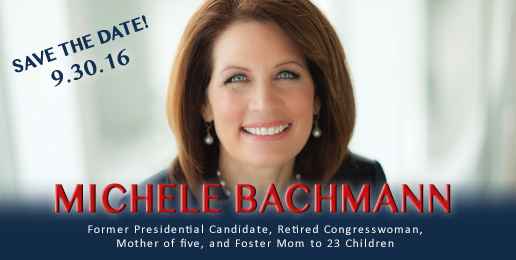 You’ll definitely want to save the date for the next IFI Fall Banquet – September 30th.  This year our keynote speaker will be Michele Bachmann, the former Congresswoman from Minnesota and the first Republican woman to actively campaign for President of the United States in 2012 — including participation in 15 Republican Presidential debates.

Congresswoman Bachmann is recognized as one of our nation’s social conservative leaders who has consistently defended America’s religious liberties and the importance of the traditional family as a bellwether necessity for a stable society. Michele has also continuously worked to defend the right to life for all Americans, including the unborn.

In fact, between 1992 to 2000, Michele and her husband were the foster parent to 23 needy children, some on a short-term basis.  This experience inspired Michele to become one of Congress’ leading advocates for foster and adopted children, earning her bipartisan praise for her efforts.

With our government’s massive growth and huge increase in debt under the current administration, U.S. Representative Bachmann was motivated to establish the Congressional Tea Party Caucus in July 2010 — to which she was elected Chairman five years in a row. She boldly called for a renewed focus on upholding the principles as laid forth by our Founding Fathers in our Constitution and The Bill of Rights.

Michele’s powerful personal testimony and prominent role as one of America’s strongest advocates for the need of a Christian witness in the public square are just two reasons you’ll want to SAVE THE DATE: Friday, September 30, 2016 in Hoffman Estates.

Check out this link to a 20 minute video of Michele Bachmann’s speech before the 2014 Values Voter Summit in Washington D.C.  Addressing a large audience, Michele told them early on that:

You don’t want to to miss this great opportunity to hear from her yourself at the biggest annual pro-family gathering in Illinois!

More details will follow, but as an important subscriber to Illinois Family Institute, we don’t want you to miss the chance to attend what we expect to be a powerful evening.  Click HERE for a flyer for this great event.

Thanks for your ongoing support for the work and ministry of IFI.  We sincerely hope to see you in Hoffman Estates this September.