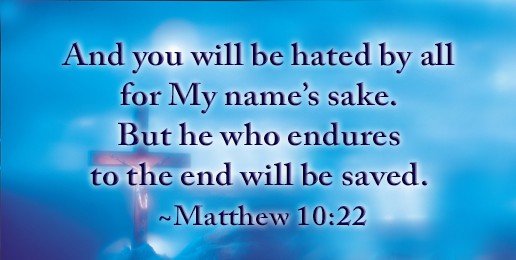 Homosexuality will be one of the key public issues confronting the next generation of American pastors. Nearly every pastor will counsel someone battling homosexual desires or actively engaged in a homosexual lifestyle. Compassionate, firm counsel is the least of the challenges. As the gay marriage movement makes headway, there will be subtle but relentless pressures from public opinion, media, law, entertainment, and, unfortunately, from within the church. Rusty Reno is right: We can expect to hear from many Christians whose views on homosexuality have “evolved” to keep pace with the new marriage regime. Those who hold out will be isolated and mocked as bigots.

Pastors and future pastors need to be prepared to suffer such low-level martyrdom. Any man who can’t take the pressure should find some other line of work.

And the first step in being prepared to witness with the Spirit against sin is to be absolutely convinced that the Bible is the standard of sexual morality and absolutely convinced that the Bible condemns homosexual desires and acts as sin. According to Paul, the approval of homosexuality is a sign that a civilization that has been delivered over to sin by the judgment of God (Romans 1:24-27). By some inner logic, idolatry produces sexual confusion, which eventually results in social chaos.

The process begins with inner uncleanness. In the old covenant, Israelites became defiled by fluids and flesh that flowed out from the body (Leviticus 15), and sometimes by food or dead bodies from the outside (Leviticus 11; Numbers 19). In the new covenant, Jesus says, the things that flow from the heart defile. Evil desires (epithumia) – sexual lust, envy, hatred, bitterness – defile (Matthew 15:18). Paul tells us that the heart-impurity that results from evil desire has visible and public ramifications: The lustful dishonor (atimazo) their bodies as they act out their evil desires (Romans 1: 24). So God gives the impure over to their dishonorable (atimia) passions, expressed in unnatural sex by men and women (Romans 1:26). Idolatry corrupts desires, and corrupted desire leads to dishonorable, unnatural sexuality.

Paul takes up these themes later in Romans. Torah cannot overcome the corruptions of desire. At best, law specifies evil desire as a transgression, and so brings it to the surface of consciousness. Paul would not have known lust (epithumia) if the law had not said “Do not covet.” Yet the ultimate result of the law is not to suppress evil desire but to provoke it: “Sin, seizing the opportunity afforded by the commandment, produced in me coveting of every kind” (7:7-8). By sharing in Christ’s death in baptism, however, we die to sin, and are no longer obligated to “obey the lusts (epithumia) thereof” (6:12). Having put on the Lord Jesus, we have the weaponry to fight sin and to stop making provision for fleshly desires (epithumia) (13:14; cf. Galatians 3:27; Ephesian 6:11). What purifies heart desires is baptismal participation in the death and resurrection of Jesus. The gospel is also the answer to dishonor. Evil desire contaminates and disfigures the image of God’s glory. But those who persevere in doing good receive honor (time) and eternal life (Romans 2:5-10).

The original source of sexual perversion is the refusal to honor God as God or to give thanks. Ingratitude and idolatry darken hearts, confusing wisdom and folly as they confuse Creator and creature (Romans 1:21-23). If ingratitude and idolatry are the source of sexual degeneration, then worship and gratitude are the church’s primary “methods” of social renewal. Legal restrictions on homosexuality and bans on gay marriage have their uses, but Paul warns us that no law, neither Torah nor the US Constitution, can purify hearts. Only the gospel answers to the heart-condition that is the mainspring of homosexual culture, but the gospel answers that condition only as it takes form as communities of worship and continuous thanksgiving.

Every pastor will counsel a homosexual; some may be sued for hate speech. But pastors address the root causes of our cultural decay in every Lord’s service. Every time a pastor presides at the Eucharist, he throws Romans 1 into reverse because every Eucharist cultivates an ecclesial zone of gratitude in a confused and ungrateful world.

Peter J. Leithart is a pastor, theologian, and Senior Fellow of Theology and Literature as well as Dean of Graduate Studies at New Saint Andrews College and holds a doctorate from Cambridge University. He was selected by the Association of Reformed Institutions of Higher Education to be one of the organization’s 2010-2012 Lecturers. He is the author of commentaries on the Book of Kings and the Book of Samuel, as well as a Survey of the Old Testament. He has authored several highly acclaimed books, including Defending Constantine, Deep Exegesis, Athanasius, Against Christianity, A Son to Me, A House for My Name, Blessed are the Hungry, Wise Words, Brightest Heaven of Invention, Heroes of the City of Man, and many more. He serves as a contributing editor for Touchstone and First Things magazines. His scholarly and popular articles have appeared in Pro Ecclesia, Journal of Biblical Literature, Westminster Theological Journal, the Atlanta Journal-Constitution, Birmingham News, First Things, Touchstone, and other publications. Other works include books on topics such as Dante’s Inferno, Dostoyevsky, and Jane Austen. He is also the author of a book of children’s bedtime stories titled Wise Words based on the Book of Proverbs.

Dr. Leithart is also a father of ten.