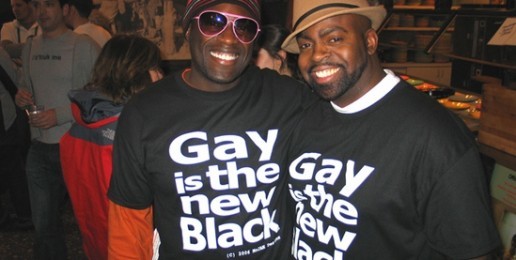 Repeating what has been a rallying cry of gay activism for years, the cover of the December 16, 2008 issue of The Advocate announced, “Gay is the New Black: The Last Great Civil Rights Struggle.” Last week, on May 19th, headlines across the nation announced, “NAACP endorses gay marriage as ‘civil right.’” So, is gay the new black?

For a number of reasons, I concur with Johnson and others who say that gay is not the new black.

1. There is no true comparison between skin color and behavior. Although gays and lesbians emphasize identity rather than behavior, homosexuality is ultimately defined by romantic attraction and sexual behavior. How can this be equated with the color of someone’s skin?

Skin color has no intrinsic moral quality, and there is no moral difference between being black or white (or yellow or red). In contrast, romantic attractions and sexual behaviors often have moral (or immoral) qualities, and there is no constitutional “right” to fulfill one’s sexual and romantic desires.

Also, skin color cannot be hidden, whereas a person’s sexual orientation is, generally speaking, not outwardly recognizable (unless it is willfully displayed). Put another way, blacks do not have to “come out,” since their identity is self-evident, whereas gays and lesbians have to come out (or act out) for their identity to be clearly known.

2. The very real hardships endured by many gays and lesbians cannot fairly be compared with the monstrous suffering endured by African Americans. Conservative gay journalist Charles Winecoff wrote, “Newsflash: blacks in America didn’t start out as hip-hop fashion designers; they were slaves. There’s a big difference between being able to enjoy a civil union with the same sex partner of your choice – and not being able to drink out of a water fountain, eat at a lunch counter, or use a rest room because you don’t have the right skin color.”

Today, we have openly gay members of Congress, openly gay celebrities, openly gay CEO’s, openly gay financial gurus, openly gay sports stars, openly gay Hollywood moguls, and openly gay college professors, bestselling authors, scientists, and on and on. In the days of segregation in America, there were few, if any, blacks in such prominent positions, not to mention the fact that in many cities in America, even the lynching of blacks was accepted. Where in America are gays and lesbians being lynched today with societal approval? And what is the LGBT equivalent to the American slave trade?

3. Skin color is innate and immutable; sexual orientation is not. Contrary to popular opinion, there is no reputable scientific evidence that people are born gay or lesbian. Even the unabashedly pro-gay American Psychiatric Association stated that, “to date there are no replicated scientific studies supporting any specific biological etiology for homosexuality.” As expressed bluntly by lesbian author Camille Paglia, “No one is born gay. The idea is ridiculous.”

John D’Emilio, a gay activist and a professor of history and of gender and women’s studies at the University of Illinois, wrote, “What’s most amazing to me about the ‘born gay’ phenomenon is that the scientific evidence for it is thin as a reed, yet it doesn’t matter. It’s an idea with such social utility that one doesn’t need much evidence in order to make it attractive and credible.”

Also contrary to popular opinion, there are former homosexuals; there are no former blacks (despite the best efforts of the late Michael Jackson). This also underscores the fact that skin color cannot be compared to behavior, since even someone who remains same-sex attracted can modify his or her sexual behavior. A black person cannot modify his or her blackness.

Stated another way, genetics determine skin color, not behavior. Otherwise, if genetics unalterably predetermined behavior, then someone with a so-called violent gene could tell the judge, “My genes made me do it!” (For more on this important subject, see the chapter “Is Gay the New Black” in my bookA Queer Thing Happened to America.)

4. Removing the unjust laws against miscegenation (interracial marriage) did not require a fundamental redefinition of marriage and family; legalizing same-sex “marriage” does.Marriage between a black person and a white person always included the two essential elements of marriage, namely a man and a woman (as opposed to just two people), and as a general rule, interracial marriage could naturally produce children and then provide those children with a mother and father. In contrast, same-sex “marriage” cannot produce children naturally and can never provide children with both a mother and father. (Another newsflash: Two dads or two moms do not equal a mom and a dad.)

Removing the laws of miscegenation simply required the removal of anti-black bigotry (since a white man could marry a Native American woman but not a black woman), whereas legalizing same-sex “marriage” requires the redefinition of marriage (opening the door to polyamorists, polygamists, and advocates of incestuous “marriages,” who are already mounting their legal and social arguments) and the normalizing of homosexuality (beginning with elementary school education), among other things.

That’s why many black Americans are rightly upset with the hijacking of the Civil Rights movement by gay activists.