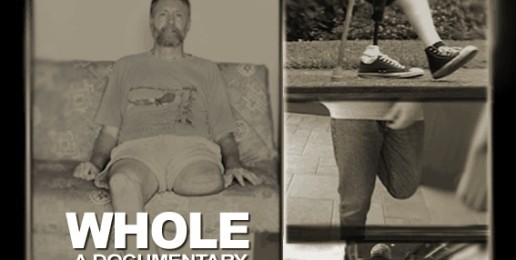 Whole: A New Documentary on a Troubling Disorder
Written By Laurie Higgins   |   12.15.10
PRINT

The new documentary Whole, which recently premiered at the Los Angeles Film Festival, explores the troubling topic of Body Integrity Identity Disorder (BIID). This disorder, which I have mentioned in several articles, used to be called apotemnophilia.

Those who suffer from BIID identify with amputees and seek to have their bodies align with their psychological identity. That is to say, they seek to have healthy limbs amputated. Many of those who suffer from BIID (known colloquially as “amputee wannabes”) recount feeling those desires from a very young age. Some have accomplished their goal through self-mutilation, and at least two have been facilitated in their quest by a doctor in Scotland.

Most civilized people recoil in horror at the idea of someone electing to have a healthy limb amputated and are outraged that any doctor would facilitate such barbarism. And yet when those who suffer from gender dysphoria–referred to euphemistically as “transgenderism”–seek to amputate healthy breasts or penises, many people suppress their horror and outrage. Instead, in their ignorance and cowardice society says that the emperor is now an empress, and “she’s” wearing women’s clothes.

Sexual and gender anarchists have created the useful rhetorical tool of “identity” to impel their cultural revolution, and this tool is now being exploited by “amputee wannabes.” The cornerstones of “identity” in this anchorless, funhouse world are any powerful, persistent feelings and desires that an individual happens to experience and chooses to value. In order to be a happy, “authentic” person, one must fulfill or act upon those powerful, persistent desires. In this distorted construct, impeded or unsatiated desires result in inauthentic, unfulfilled lives.

These sexual anarchists are, of necessity, moral relativists. One of the impediments to authenticity and fulfillment is moral disapprobation, so all expressions of disapproval of the beliefs and actions of gender relativists have now become anathema and must be silenced by hook, crook, epithets, and laws–diversity and tolerance be damned.

We in our intellectual laziness, cowardice, and desire to live a morally undisciplined life in which we too can indulge our sinful impulses are failing to challenge this perverse understanding of identity. And when we allow the fatuous construct of “identity” to supplant the true concepts of sin, immorality, and mental disorder, on what rational basis can we justify opposition to elective amputations of legs or arms? How long will a foolish and fearful society that condones the elective amputation of healthy breasts and penises in the service of mental illness and sinful impulses be able to stand firm against the elective amputation of legs or arms?

Anyone who truly cares for those who experience BIID or gender dysphoria and who cares about truth must not remain silent in the face of such hideous “treatments.”