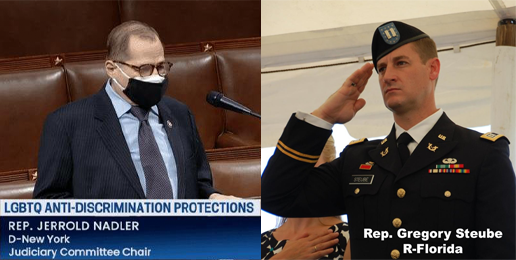 The Great Gelding of American men was a necessary precondition for “trans”-cultists to begin in earnest their effort to eradicate all public recognition of sex differences everywhere for everyone. This goal is within reach because of policies and laws already in place. The “Equality” Act will be the coup de grace. This effort could not be successful without the gelding of American men, because in previous generations, men would have protected women and children. But that was then and this is now.

The “Equality” Act has already passed the U.S. House of Representatives with three traitorous Republicans voting in favor of it. It now moves to the U.S. Senate. Let’s hope and pray there are enough wise and courageous men and women to stop it there.

I have said and written ad nauseum something that no one to my knowledge is discussing, which is that once discrimination based on both “sex” and “gender identity” is prohibited in places of public accommodation—as it is here in Illinois and will be everywhere if the “Equality” Act is signed into law—there exists no legal way to prohibit normal men—those the left refers to as “cisgender”—from accessing women’s private spaces, including women’s bathrooms and locker rooms.

And the university couldn’t deny “cisgender” John access based on his “cisgender” identity because discrimination based on “gender identity” is illegal–or will be soon.

There you have it, friends. Most obstacles—including the un-manning of men—to the eradication of sex-segregation in private spaces have been removed. The rest of the obstacles are being carried away as we sit in our homes watching Netflix.

Feminists, lesbians, and Christian women are now banding together as co-belligerents to fight this unholy, anti-science movement, which is a good thing. But are men really going to leave this ugly battle to women to fight? Are there not enough un-gelded men remaining in America to lead this effort to protect their daughters, wives, mothers, sisters, and girlfriends? Are there not enough Congressmen who will not only vote against the “Equality” Act but also speak out against it publicly?

Thankfully, not all American men have been gelded. As we learned last week, U.S. Representative Gregory Steube, a Republican from Florida, boldly defended God’s created order on the House floor and warned of the consequences for rebellion against that order.

Immediately, the always foolish and arrogant U.S. Representative Jerry Nadler (D-NY) leapt to his feet to express the impious, ignorant, and anti-American belief that Congress has no interest in God:

Mr. Steube, whatever any religious tradition ascribes as God’s will is no concern of this Congress.

Clearly, Nadler is correct. God’s will is of no concern to this Democrat-controlled Congress.

One wonders what Nadler would have said when in 1789, George Washington spoke these words to the first Congress at the first presidential inauguration:

[I]t would be peculiarly improper to omit in this first official Act, my fervent supplications to that Almighty Being who rules over the Universe, who presides in the Councils of Nations, and whose providential aids can supply every human defect, that his benediction may consecrate to the liberties and happiness of the People of the United States, a Government instituted by themselves for these essential purposes: and may enable every instrument employed in its administration to execute with success, the functions allotted to his charge. In tendering this homage to the Great Author of every public and private good, I assure myself that it expresses your sentiments not less than my own; nor those of my fellow-citizens at large, less than either. No People can be bound to acknowledge and adore the invisible hand, which conducts the Affairs of men more than the People of the United States.

And what does Nadler in his infinite wisdom think of these words from George Washington in 1789:

Whereas it is the duty of all Nations to acknowledge the providence of Almighty God, to obey his will, to be grateful for his benefits, and humbly to implore his protection and favor, and Whereas both Houses of Congress have by their joint Committee requested me “to recommend to the People of the United States a day of public thanks-giving and prayer to be observed by acknowledging with grateful hearts the many signal favors of Almighty God, especially by affording them an opportunity peaceably to establish a form of government for their safety and happiness.”

Now therefore I do recommend and assign Thursday the 26th day of November next to be devoted by the People of these States to the service of that great and glorious Being, who is the beneficent Author of all the good that was, that is, or that will be.

For those unfamiliar with Steube, he is an attorney who enlisted in the U.S. Army after 9/11 and “served with distinction from 2004 to 2008 as an Airborne Infantry Officer and a JAG Corps Officer.  Greg served as the Chief of Detainee Operations for Multinational Division North in Iraq with the 25th Infantry Division in support of Operation Iraqi Freedom from 2006-2007.”

In addition to obliterating the right of free people to distinguish between men and women in bathrooms, locker rooms, and shelters, the “Equality” Act specifically addresses the Religious Freedom Restoration Act. The “Equality” Act essentially says that the right of people of faith to exercise freely their beliefs on the nature and meaning of biological sex must be subordinated to the invented “right” of cross-dressing persons to access the private spaces of opposite-sex persons.

The leftist hive mind affirms the destruction of all public recognition of biological sex as well as the First Amendment. Resistance is futile—or so our buzzing Overlords think.

Take ACTION:  The measure now proceeds to the U.S. Senate where the potential outcome remains uncertain. Click HERE to send a message to our U.S. Senators Dick Durbin and Tammy Duckworth to urge them to oppose the federal Equality Act (H.R. 5) which seeks to amend the Civil Rights Act of 1964 to include protections for an individual’s perceived sex, “sexual orientation,” or “gender identity.”

The Disastrous Biden Administration
b
a
x
r