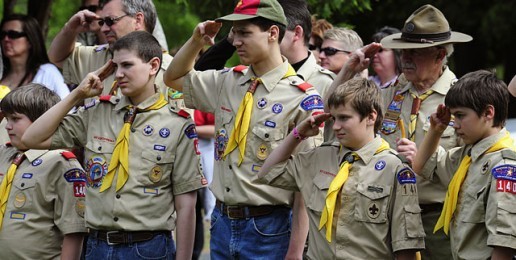 The executive committee of the Boy Scouts of America (BSA) has written a resolution for consideration that would remove the restriction denying membership to youth on the basis of sexual orientation. This resolution would allow the scouts to maintain the current prohibition on openly gay scoutmasters. Another proposal would leave the decision on homosexual scoutmasters to individual troops.  According to an action alert from our friends at American Family Association, the resolution reads in part:

While the BSA does not proactively inquire about sexual orientation of employees, volunteers, or members, we do not grant membership to individuals who are open or avowed homosexuals or who engage in behavior that would become a distraction to the mission of the BSA.

This proposal may seem less portentous than a decision to permit scoutmasters to be openly homosexual, but the resolution creates two standards by allowing the scouts themselves to identify openly as homosexual, but maintains the ban on leaders who identify as homosexual.  This works against the original aim of the BSA to encourage young men to develop in morally, mentally, and physically healthy ways, free to be boys and teens without the invasion of cultural and political controversies.  Allowing scouts to identify openly as homosexual will inevitably lead to the politicization and sexualization of their friendships and the scouting community. This is unnecessary and harmful.

The Supreme Court of the United States has backed the BSA up on their authority to set membership rules. There is no reason for them to change now except illegitimate political pressure from extreme homosexual lobbying groups. Please sign the Family Research Council’s scouts’ pledge, encouraging the national BSA board to demonstrate integrity in this matter, and visit OnMyHonor.net for further resources and action points. Moms of Boy Scouts also provides regular updates on the situation, and FRC will host a simulcast on May 5, which they have designated “Stand With Scouts Sunday,” at 7:00 p.m.

In 1998, Canadian Scouts (CS) decided to allow females, atheists, agnostics, homosexuals, bisexuals and transsexuals to join the CS. In 1999, they approved the establishment of an all-homosexual troop, which now marches in Canada’s “gay pride” parades. Within five years, scouting membership dropped over 50 percent. Many scouting camps and offices were closed, and staff was laid off.  Click HERE for a specific list of the impact open homosexuality would have on scouting.

“What kind of a message are we sending to our young people if the very leaders who are teaching Boy Scouts to be brave cannot even find the courage to stand firm and avoid caving in to peer pressure from Hollywood and political activists?”

Take ACTION:  Click HERE to send an email to the BSA urging its board members to retain its current policy on homosexuality. If the BSA hopes to retain the trust, loyalty, and affection of parents and supporters nationwide, it must unequivocally reaffirm its current God-honoring policy.