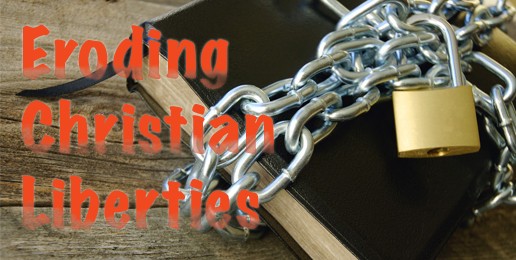 Last week liberal Slate Magazine writer William Saletan made a semi-effective attempt at satire, proposing that all employees in corporate America who donated to Prop 8 in California six years ago be fired like Mozilla’s CEO Brendan Eich. The problem with his piece was that his proposal wasn’t outrageous enough. In fact, many on both the political Right and Left believed it was a sincere proposal.

Now, Jonathan Swift knew how to write satire. To criticize the callousness of the Irish to the extreme poverty in their midst, he proposed the inconceivable idea of devouring Irish children. Saletan, in contrast, proposed an idea of which the Left has not only conceived but executed. Saletan’s proposal just increases the scale.

The California Supreme Court Advisory Committee on the Code of Judicial Ethics seeks to prohibit all California judges from being affiliated with the Boy Scouts of America (BSA) because—in the supreme committee’s view—the BSA engage in “invidious discrimination” by prohibiting homosexuals from serving in leadership positions. Of course, this whole house of cards is built on the foolish and unproven assumption that homoerotic desire and volitional homoerotic activity are analogous to skin color or other behaviorally neutral conditions.

In a letter to the Advisory Committee, Catherine Short, legal director of the pro-life group Life Legal Defense Foundation, warned about the real effect of such a draconian policy:

[B]y promoting a hierarchy of politically-favored ‘victim’ status through pointlessly impugning the integrity of members of a venerable American institution, the proposed Amendment will communicate to the public that judges are being told by the California Supreme Court what to think, whom they may associate with, and what are permissible opinions to hold, and that only those who toe the line will be allowed to sit on the bench. The public can hardly expect impartiality from the judiciary in such a climate of intolerance.

Roger Pilon, vice president for legal affairs with the libertarian Cato Institute points out the inconsistency in the “progressive” position. He writes that if, as “progressives” argue, it is unfair to presume that homosexuals are unfit to serve in leadership positions in the BSA, then it is similarly unfair to presume that judges who volunteer to work with the BSA are unfit to serve as judges:

[C]ritics say that the concerns (about potential sexual abuse of boys by homosexual leaders) of the BSA and of scout parents should be set aside and that gay would-be scout leaders must be given the benefit of the doubt. That may or may not be a fair point, substantively, but it cuts both ways, of course. Are judges who volunteer to work with scouts presumptively unfit to serve on the bench?

Pilon goes on to argue, moreover, that the status of the BSA as a private organization grants it the right to establish its own policies regarding membership (which includes leaders):

The BSA is a private association. Agree or disagree with the presumption it has applied, it has a right to set the conditions for membership, which it has done by deciding, in part, that it does not want to run the risk, whether reasonable or not, of allowing gay scout leaders into the group. The courts, by contrast, are public institutions, which may discriminate only for compelling reasons.

This is another portent of things to come. Why stop with state judiciaries? Why not prohibit federal judges and U.S. Supreme Court justices from belonging to any private organization that makes moral distinctions between natural sex between men and women and homoerotic activity?

But why stop there? Why not prohibit anyone from serving in state legislatures or U.S. Congress who belongs to or volunteers for an organization that prohibits homoerotic activity?

And why should anyone be permitted to serve as president of the United States who belongs to an organization that believes volitional homoerotic activity (like polyamory, consensual adult incest, and paraphilic activity) is illicit and constitutes a character flaw?

These are not satirical proposals. Homosexual activists and their ideological allies believe that normalizing voluntary homoerotic activity and relationships trumps First Amendment protections of association, speech, and religious liberty.

Conservatives better start looking at the darkening forest that these trees are creating before all light is eclipsed.