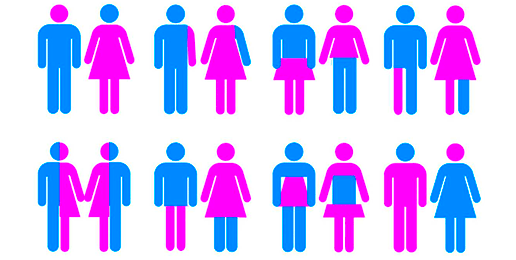 In a recent essay for The Spectator, Brendan O’Neill argues that the political movement to legally recognize non-marital homoerotic relationships as marriages undermines freedom and liberty:

[E]verywhere gay marriage has been introduced it has battered freedom, not boosted it. Debate has been chilled, dissenters harried, critics tear-gassed…. The double-thinking ‘freedom to marry’ has done more to power the elbow of the state than it has to expand the liberty of men and women. There are awkward questions the ‘freedom to marry’ folks just can’t answer. Like: if gay marriage is a liberal cause, how come it’s been attended by authoritarianism wherever it’s been introduced?

[T]he gay marriage campaign is so contradictorily illiberal, so hostile to dissent, and so attractive to petty-authoritarian politicians: because it isn’t about expanding liberty at all; it’s about unilaterally overhauling the moral outlook of the traditionalist sections of society.

O’Neill argues that the legal destruction of marriage is the “final act in a pink-tinged tyranny kickstarted by the new authoritarians of the modern West.”

Unfortunately, there are yet more edicts to come from the sexually transgressive, this time from “transgenders.” Their tyrannical demands include changing the legal and grammatical landscape so that neither legal documents nor pronouns reflect the objective reality of biological sex (i.e., male and female) but rather the subjective world of disordered feelings about one’s biological sex.

In the perversely malleable, subjective universe of the gender-confused, all dimensions of culture must accept and submit to their desires and the ideology they have concocted to serve those desires. Now even the law must submit. Confused men who choose to have their healthy penises amputated, faux-women’s breasts affixed to their chests, and to cross-dress demand that their birth certificates be changed. No longer will birth certificates indicate objective biological sex at birth but, rather, the biological sex adults wish they were. Birth certificates and all other legal documents that indicate sex will no longer reflect objective reality but subjective desire.

In the service of promoting the perverse sexual ideology created to normalize gender-confusion, “progressives” resolved to gain access to the impressionable hearts and minds of other people’s children through government schools. The newest public school scandal has emerged in California where parents are angry that staff from Planned Parenthood were brought in without parental knowledge to teach their 9th-grade children about sexuality, including gender confusion. Of course, that’s not the term “progressives” or public school “educators” use, which reveals one of the problems: the materials and language related to gender confusion (and homosexuality) are Leftist materials and language, which promote Leftist assumptions as facts to children. 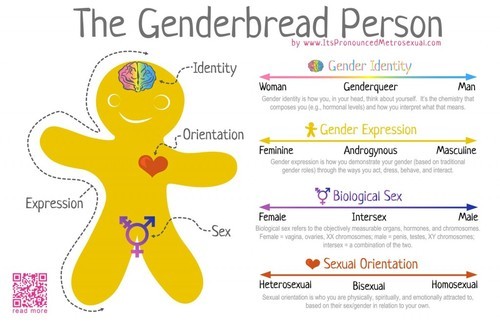 One of the resources distributed to children in the Lafayette, California class was a colorful diagram with the twisted holiday title “The Genderbread Person” (see above), which makes this preposterous statement:

Gender is one of those things everyone thinks they understand but most people don’t….Gender isn’t binary. It’s not either/or. In many cases, it’s both/and. This tasty little guide is meant to be an appetizer for understanding. It’s okay if you’re hungry for more.

Leftists may believe there are infinite genders, but their feckless beliefs are not facts, and the government has no right to promote them as objective, inarguable truths or facts.

Advocacy of Leftist assumptions includes the pernicious practice of requiring teachers to refer to gender-confused students by pronouns that correspond to the sex they are not. Pronouns denote objective biological sex—not “gender identity”—which is a rhetorical invention as deceitful as the elaborate but futile efforts of gender-confused men and women to conceal their biological sex. So, public schools (i.e., arms of the government) are requiring teachers to lie.

It’s difficult to figure out what to do about the absurd legal changes lawmakers have enacted that make a mockery of the law by embracing the incoherent and insalubrious assumptions of the “LGBT” movement. It is not, however, difficult to figure out how to respond to the demands of the gender-confused community that ordinary citizens accept their false assumptions about biological sex, language, and compassion.

Here are some truths that conservatives must remember:

• Biological sex (i.e., being male or female) is inherently and always good.

• Maleness and femaleness are biologically determined and immutable.

• Biological sex is central to human wholeness and flourishing.  The Left’s fanciful notion about embodiment reflects a false mind-body distinction that suggests mind and body are separable.

• It is profoundly unloving to facilitate gender-confused men and women in the rejection of their biological sex. Lost in spiritual darkness, they desire that others affirm the fiction they are attempting to create, but such affirmation of confusion and disorder is the antithesis of love.  All sin is infused with confusion and disorder, and sinners desire that others affirm their sin as normal and good. But it is truth that will set the confused free from bondage to sin. Gender-confused children need counseling and compassion—not lies.

• It is good for society to reinforce sexual differentiation (e.g., through clothing, jewelry, hairstyles). Males and females are different (as both the homosexual and “transgender” communities affirm). Those differences are substantive and meaningful, and reinforcing them is inherently good. The Left argues that the cultural reinforcement of sexual differentiation is harmful except of course for gender-confused persons for whom cultural artifacts that reinforce sex differences are profoundly important.

• No one should capitulate to the imperious and arrogant commands of LGBT activists that everyone use pronouns to denote “gender identity” rather than biological sex. No one is morally obliged to accept such a revolutionary grammatical shift.

A special note to public school teachers:  Referring to a boy as “she” or a girl as “he” constitutes lying. The government has no right to compel teachers to lie, and teachers have no right to lie. For a Christian teacher to facilitate or participate in a lie of such profound magnitude is indefensible. And yes, refusal to facilitate or participate in such a lie will be costly. Discipleship in America is becoming costlier.

The enemy is now attacking a truth about God’s created order at least as fundamental as (and inextricably linked to) marriage: maleness and femaleness.  This attack calls for courageous, bold, and steadfast opposition. If we love God and love our neighbors as ourselves, we will not allow such lies to go unchallenged. And we must not be deceived by the sophistry of those who argue that affirming the essential goodness and integrity of biological sex is hateful. We acquiesce to our own fear at great peril.