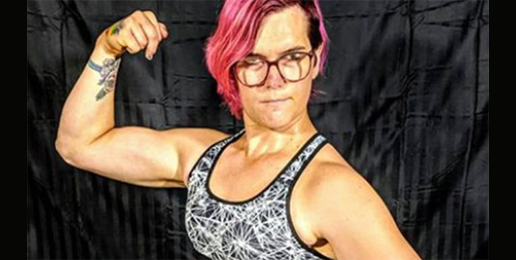 McKinnon, a 37-year-old, 6-foot, 200-pound associate professor of philosophy at the College of Charleston in South Carolina who started cross-sex hormone-doping just 8 years ago, indignantly tweeted recently that he has taught courses on “Sports and Ethics.” Remarkable. McKinnon has taught a course on sports and ethics as he trounces women in their own sport. Now “trans” cultists have redefined unethical as ethical.

McKinnon also made this patently foolish statement: “‘We are either full and equal women, or not.” Not only is he not a “full” woman. He’s not even a partial woman. He’s a chemically altered simulacrum of a woman. He’s a woman only in his fertile imagination—not his infertile body.

His Twitter feed is a cornucopia of nonsense. For example, he wrote, “Having a penis… should have absolutely no bearing on whether someone is eligible to compete in women’s sport.”

If McKinnon’s name sounds familiar it may be because he achieved Twitter notoriety when he tweeted this on the day conservative billionaire David Koch died: “It’s okay to be happy, even celebrate, when bad people die.”

Shortly thereafter, McKinnon referred to Scottish feminist Magdalen Berns, who died on September 13 of from a malignant brain tumor at age 36, as “a trash human being” about whose death he was happy because she opposed the science-denying “trans” ideology.

Close on the heels of McKinnon, came University of Montana male runner “June” Eastwood, who last year ran for the men’s team and last week was named by the Big Sky Conference “cross-country female athlete of the week.”

Another collegiate athlete, “Cece” Telfer, a young man who last year ran on the men’s team at NCAA Division II Franklin Pierce University and this year ran on the women’s team, “is one of the fastest runners in NCAA women’s track and field at any division—not just at the DII level.”

Biological men are now participating and breaking records in women’s high school, college and university, Olympic, and professional competitions, with the real possibility of men eventually breaking every existing women’s record. So much for the hard-won athletic opportunities women gained from Title IX.

Cross-dressing men who seek to participate in women’s sports have claimed that cross-sex hormone-doping renders the playing field between them and women equal, but a new (and unsurprising) essay published by the Journal of Medical Ethics puts the lie to that “trans” claim.

An essay titled “Transwomen in elite sport: scientific and ethical considerations” and published online in June 2019, concluded that “the performance advantage likely held by transwomen is not a ‘tolerable unfairness'”:

Together the scientific data point to testosterone providing an all-purpose benefit across a range of body systems that contribute to athletic performance for almost all sports…. Transwomen are allowed to compete with testosterone levels just under [the International Olympic Committee guidelines of] 10 nmol/L. This is more than five times the upper testosterone level (1.7 nmol/L) of healthy, premenopausal elite cis-women athletes. Given that testosterone (as well as other elements stemming from Y-chromosome-dependent male physiology) provides an all-purpose benefit in sport, suggests that transwomen have a performance advantage.

[I]t has been demonstrated that healthy young men did not lose significant muscle mass (or power) when their circulating testosterone levels were reduced to 8.8 nmol/L (lower than the IOC guideline of 10 nmol/L) for 20 weeks. Moreover, retention of muscle mass could be compensated for by training or other ergogenic methods. In addition, the phenomenon of muscle memory means muscle mass and strength can be rebuilt with previous strength exercise making it easier to regain muscle mass later in life even after long intervening periods of inactivity and mass loss. Also, indirect effects of testosterone will not be altered by hormone therapy. For example, hormone therapy will not alter bone structure, lung volume or heart size of the transwoman athlete, especially if she [sic] transitions postpuberty, so natural advantages including joint articulation, stroke volume and maximal oxygen uptake will be maintained.

A recent meta-analysis shows that hormone therapy provided to transwomen over 2 years maintains bone density, so bone strength is unlikely to fall to levels of cis-women, especially in an elite athlete competing and training at high intensity. Increased bone strength also translates into protection against trauma, helping with recovery and prevention of injury.

The authors of this essay suggest that biological sex is akin to other factors that affect athletic success, like luck, the “bounce of the ball or a gust of wind,” Polycystic Ovarian Syndrome, the genetic lottery, and coming from a wealthy country. Because of their concern about both “tolerable fairness” and “inclusivity,” the authors propose eliminating the “socially constructed” “male/female” athletic categories, replacing them with new categories based on a multifactorial algorithm:

First, there would be multiple divisions rather than simply male and female. Second, based on the results of the algorithm, athletes would be placed into a division which best mitigates unfair physical and social parameters. The physiological parameters could include… height and weight. Haemoglobin levels. Maximal oxygen uptake (VO2 max). Whether the athlete transitioned before, during or well after puberty. Past and present testosterone levels, and the presence of testes.

Such a radical means of establishing sports divisions emerges from widespread cultural assent to the proposition that biological sex is subordinate to “gender identity” in every area that has historically differentiated biological men from women. Such a capitulation to tyrannical, science-denying “trans”-cultists necessarily means biological sex has no meaning.

The end game for “trans”-cultists is not now nor ever has been to allow a few “trans”-identifying persons access to opposite-sex private spaces or sports. The end game is now and always has been the eradication of public recognition of biological sex everywhere.

This article was originally published at SalvoMag.com