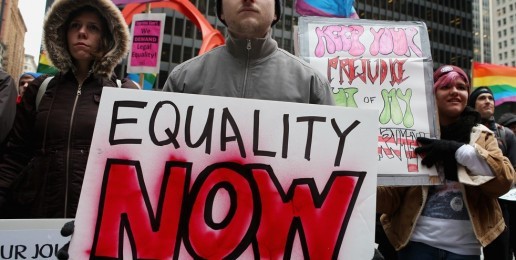 The quickness with which the same-sex marriage proponents appear to have “turned the tide” legislatively in the U.S. forces one to examine their tactics as well as their goals.  An honest observer will note that they have done a good job of propagandizing young Americans, the majority of whom no longer have any significant moral compass by which to determine such things.  Multitudes of those who were born after the 60’s sexual revolution are not concerned with whether God has anything to say about morality!  Young Americans’ concept of “god” apparently is that he is a tender-hearted but dim-witted old soul who knows little of what is going on, and certainly has no inclination to rain on anyone’s parade. Since Liberalism’s “revolution” liberated sex from the constraints of marriage, it is not much of a stretch to liberate sex from heterosexual restrictions as well.  A principal plank in liberalism’s “platform” is the removal of all restraints from sexual “expression.”  One cannot miss their core belief that sex is like breathing: it can and should be allowed anytime and anywhere by anyone while someone else picks up the tab.  While all constitutional rights have common sense limits, the Left has made it clear that the individual, “right” to pleasure, especially sexual pleasure, literally has NO limits.  To them, there is no evil greater than to suggest that sexual pleasure ought to have restraints.But, one cannot miss the irony that while America’s popular culture is fleeing the constraints of marriage in general, the homosexual movement is suddenly demanding it for themselves.  What’s with that?  The primary purpose for marriage has always been to restrain the “wild horses” of mankind’s sexuality.  It is intended to place severe limits on one’s sexual activity.  It is entering a solemn contract with God and one’s spouse before public witnesses promising to deny self for one’s lifetime for the sake of others, especially any future children.  In simple terms, it is about voluntary sacrifice. It is due to the restraints of marriage that the radical Left has sought to undermine and destroy it for over fifty years.  However, reading the arguments of the homosexual lobby in their demand for the right to marry, they claim only to want “fairness” for themselves! They declare their intentions are simply to get the same benefits that traditional families have received.  Methinks rather the destruction of marriage and family from the outside has been moving too slowly, so they are shifting tactics and moving the battle inside.However, our government has offered benefits to married couples for the express purpose of compensating them for the sacrifices good parents make for their children who just happen to be the future of the state.  The burdens of parenting are at times so significant that many parents struggle under the load.  It is because of wise leadership in the past that our government saw the advantages of encouraging and strengthening the home.  The state gains no benefit in giving aid to people who merely wish to live together, and actually undermines its future by doing so!  To require the state to give the same benefits to non-traditional couples as it does to traditional families would be like requiring the government to give the same benefits to non veterans as it does to vets.  To do THAT would be inherently unfair!The realities are clear: traditional families are the backbone of the nation, culture, stability and peace.  They contribute overwhelmingly to the well-being of the nation.  On the other hand, the costs to the state in terms of welfare, crime, troubled neighborhoods, etc. due to unfettered sexuality is staggering.  Why would we intentionally add to this crisis by further eroding the traditional family?Whatever the intentions of the homosexual lobby are, it is clear that the well-being of future generations of children is not one of them.  That is no surprise as our culture and our political leadership of late in general show little interest in the long-term well-being of children.  If they did, they would not tolerate the pollution that television and popular music pour into their minds, and would take the necessary actions to better protect them on the streets.  They would make getting married hard, and getting divorced much harder.  If America loved children we would not chain them in failing schools to satisfy the unions, and we would certainly not abort nearly 1/3 of them before they were born!  If we really cared for children, we would disregard political correctness, reintroduce God to the schools and culture, and do everything in our power to reestablish the traditional heterosexual family as normative.  That is what is best for children, and that is what is best for America.Whatever the intentions of the homosexual lobby are, this is clear: it is not about them sacrificing anything!  And, one need not be a genius to understand that when adults won’t sacrifice, the children do.That is not merely unfair, it is immoral!