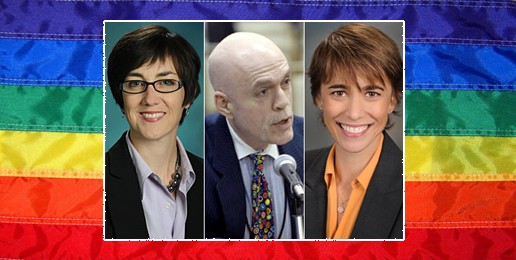 A month ago I wrote an article drawing your attention to the fact that anti-family forces were planning their next steps to redefine natural marriage here in Illinois. Well, late last week they introduced a bill in the Illinois House of Representatives that, if passed, would bring homosexual so-called “marriage” to the Land of Lincoln. State Representatives Greg Harris (D-Chicago), Kelly Cassidy (D-Chicago) and Deborah Mell (D-Chicago) filed HB 5170 last week.  Signing on as co-sponsors are Barbara Flynn Currie (D-Chicago), Sara Feigenholtz (D-Chicago), Ann Williams (D-Chicago) and Daniel Biss (D-Skokie).

We shouldn’t be surprised by the hubris of Illinois’ three openly homosexual state lawmakers who offer empty assurances to their colleagues and people of faith that religious freedom will be protected. Pray that this latest attempt to deceive will not fool the faith-based community again.

Take ACTION: Click HERE to send an email or a fax to your state representative NOW and urge him/her to VOTE NO on HB 5170.  Springfield lawmakers need to hear from you right away.  If you are also inclinded to make a phone call, the switchboard phone number in Springfield is (217) 782-2000.

If you’ve been reading our emails over the past few years, you know that homosexual activists and their allies are aggressively pursuing their radical goals here in Illinois.

This is not the first time that a same-sex bill has been introduced.  In February 2007, State Representative Greg Harris introduced a similar bill but then quickly scrapped it for a “civil union” bill.  While I do not believe there is enough support in the Illinois General Assembly to pass a bill legalizing homosexual so-called “marriage” at this time, we know they will not relent until they have completely dismantled marriage and family.  The challenges we face on the pro-marriage and pro-family front are great.

That is why the primary and general elections this year are so very important. We have a chance to elect God-fearing men and women, and move the General Assembly toward a more family-friendly environment.  Liberal activists recognize that this bill may not have the votes to pass this year, but they have to try this year because the state legislature will likely be more conservative after the 2012 elections than it is now.

The battle lines have been clearly drawn. The ACLU, Lambda Legal, Equality Illinois, The Civil Rights Agenda and Gay and Lesbian affirming churches will lobby fervently here in Illinois to achieve their goal of redefining marriage.  IFI will work tenaciously with legislators to build a strong coalition around protecting marriage from this latest assault from liberal and LGBT activists.  If those who support natural marriage — God’s institution of marriage — are silent now, it will be easier to convince legislators to redefine marriage without fear of consequences.  So, do not be silent.

This debate will not be decided based on who has the stronger arguments. It will be won by whoever cares more. This issue will come down to whether or not pro-marriage voters can convince their legislators that voting to redefine marriage is not in their political best interest. If legislators believe that voting to redefine marriage will cost them their jobs, they won’t do it. It really is that simple.

This debate will be passionate, but please stay calm. Uncivil dialogue is counterproductive. Express your passionate concern about marriage to your legislators in respectful ways.

If each of us controls the things we can control, the results will be good. If we act as if it doesn’t matter and remain, as too many do, “above the fray,” the results for society will be corrosive.

Please pass this information along so that your friends and family know what is happening and what they can do about it.

If you appreciate this information and our work, please consider a donation of any size.