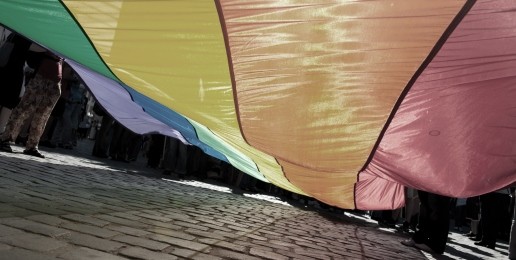 The first-ever major U.S. Government survey to present “nationally representative data on sexual orientation” finds that only 1.6 percent of Americans identify as “gay” or “lesbian,” while .7 percent identify as “bisexual.” This is about considerably less than the much-ballyhooed, decades-old LGBT claim that 10 percent of society is “gay.”

Almost 98 percent of the 35,557 survey respondents identified themselves as “straight” or “not gay,” according to the survey by the federal National Center for Health Statistics (NCHS). It also found significant health and behavior disparities between heterosexuals and self-described gays, lesbians and bisexuals. For example, the latter were much more likely to be heavy drinkers than straights.

The 2.3 percent gay-lesbian-bisexual figure is far below the “10 percent gay” number that has been advanced for decades by homosexual activists and their allies—dating back to the discredited sex research of Alfred Kinsey, who vastly over-sampled sexual adventurers and deviants (including criminals). The “10 Percent” ploy suggested homosexuality was far more common—and hence “normal”–than it actually was. Marshall Kirk and Hunter Madsen, homosexual authors of the influential 1989 book After the Ball: How America Will Conquer Its Fear & Hatred of Gays in 90s (and relying on Kinsey’s fraudulent estimates), demonstrate how the myth was used for PR purposes:

If we must…pick a specific percentage for propaganda purposes, we may as well stick with the solidly conservative figure suggested by Kinsey decades ago: taking men and women together, at least 10% of the populace has demonstrated its homosexual proclivities so extensively that the proportion may reasonably be called ‘gay.’….

Straights do not appreciate that, with at least one-tenth of the public extensively involved in it, the practice of homosexuality may be a more commonplace activity in America than, say, bowling (6%), jogging (7%), golfing (5%), hunting (6%), reading drugstore romance novels (9%), or ballroom dancing (2%) on a regular basis. (Ballroom dancing—not that’s abnormal.)…

You should grasp clearly why America’s persistent underestimation of the number of homosexuals in its citizenry and core institutions is so dangerous to the cause of civil rights….Literally, the more the better. As Kinsey, Pomeroy, and Martin explain dryly in their classic study, Sexual Behavior in the Human Male

“To those who believe, as children do, that conformance should be universal, any departure from the rule becomes immorality. The immorality seems particularly gross to an individual who is unaware of the frequency with which exceptions to the supposed rule actually occur.”

Thus, when it comes to fighting the charge that homosexuality is statistically abnormal hence immoral, there is strength in numbers. [pp. 16-17, emphasis theirs]

Here I call it a myth, but the defiance with which homosexual activists like Kirk and Madsen so aggressively promulgated their “10 percent gay” factoid suggests that it could more aptly be called a lie, perhaps a useful political lie—which is to say, propaganda. (Another LGBT activist distortion is the oft-repeated claim that homosexuals, and now transgenders, are “born that way” despite mountains of evidence to the contrary.)

For example, Kevin Jennings, the founder of GLSEN, the Gay, Lesbian & Straight Education Network, and a former Obama Department of Education appointee, titled one of his books, “One Teacher in Ten” (see graphic above)—which is far more compelling, from a “gay” activist perspective, than “One Teacher in 45.”

Of course, it didn’t help the cause of accuracy that “mainstream” media organs like the Washington Post routinely repeated the bogus 10-percent figure in their homosexuality-related articles, as if it were fact. Conservative efforts to correct the powerful “10 percent” myth often fell on deaf media ears.

To this day, some LGBT activists and straight, liberal allies maintain that “10 percent” of the population of the United States, or any society for that matter, is “gay” or bisexual/transgender. Given the new NHIS data, which confirms previous surveys that put the “gay” population at 1-3 percent, and no higher than 5 percent, this claim is as tendentious as it is absurd.

[To read about two other studies confirming low population percentages for homosexuals, see this report on a 2011 Williams Institute survey that found that 1.7 percent of the U.S. adult population is “gay or lesbian”; also see this account by Paul Cameron’s group, Family Research Institute, of an older study by the liberal Alan Guttmacher Institute, which “interviewed over 3,300 men throughout the country in 1991, [and]] found that only 2.3 percent of those interviewed admit to a same-sex experience in the last ten years; only 1.1 percent say they have been exclusively gay.”]

The National Center for Health Statistics is a branch of Health and Human Services (HHS), and the thoroughly-tested methods used for its ongoing “National Health Interview Survey” (NHIS) make it a trusted source of population data. [I will discuss those methods and the challenges of gathering survey information about homosexuality in Part Two of this AFTAH report.] This survey, based on 2013 interviews, was the first NHIS to report on “sexual orientation’ data; it states:

NHIS is an annual multipurpose health survey conducted continuously throughout the year and serves as a primary source of health data on the civilian noninstitutionalized population of the United States. Data are collected by trained interviewers with the U.S. Census Bureau using computer-assisted personal interviewing (CAPI), a data collection method in which an interviewer meets with respondents face-to-face to ask questions and enter the answers into a laptop computer. When necessary, interviewers may complete missing portions of the interview over the telephone.

The NHIS report containing questions about homosexuality and bisexuality–but not transgenderism and transsexuality–is the result of a hard-fought political victory achieved years ago by “gay” activists to include homosexuality-related questions in federal surveys.

Having won that victory, LGBT activists now might not want to face the results. Some are already complaining that the NCHS survey is inaccurate—falling back on their usual claim that many homosexuals and bisexuals go uncounted because they are afraid to reveal their sexual status to interviewers. [See the comments at the bottom of this Huffington Post article and see this essay on the pro-LGBT site Bilerico.] However, in a culture that increasingly celebrates homosexual, bisexual and transgender identities and behavior, such reasoning pulls less and less weight.

It is fair to surmise—at least with regard to the prevalence of homosexuality—that the notion of widespread “gayness” in the culture is largely a media creation. Surely the fact that homosexuality is much more common in big cities, which dominate the media and pop culture, contributes greatly to the false perceptions. Also, the ridiculously high estimates of homosexual population in the public’s mind testify to the effectiveness of the emotionally manipulative “gay” strategy of “coming out” (as an open and proud homosexual) to as many people as possible.

LGBT activists have long understood that visibility equals power, and with the help of a progressively more sycophantic and gay-compliant media, they created a popular perception that, it turns out, is not even close to reality. Perhaps the new NCHS survey will add to the seriousness to the numbers conversation and the media’s treatment of it.

Still a lot of homosexuals

Even as it deflates a longstanding “gay” myth, the 2.3 percent NHIS figure itself is hardly comforting to those, like this writer, who believe that homosexual practice is a sin and/or a destructive aberration (i.e., a sexual perversion). The 2014 U.S. population of 317,297,938 translates into an estimated 5,076,939 “gays and lesbians,” and 2,221,086 bisexuals—for a total “non-straight” U.S. population of 7,297,853. That’s larger than the populations of Los Angeles and Chicago combined.

It is almost hard to imagine that as recently as the late 1940s, homosexual behavior was so taboo, and open homosexuality so rare, that pioneering “gay” activist Harry Hay could count on both hands the number of fellow “out” American activists who were willing to join him as open, pro-homosexual organizers. (See The Trouble with Harry Hay, by Stuart Timmons.)

A problem with semantics

In Part Two of this AFTAH report, I will examine some of the difficulties and discoveries of government researchers in surveying the public on homosexuality. For example, English-speaking respondents understand the words “straight” and “gay,” but those terms are alien to many Hispanics, who use “heterosexual” and “homosexual.”

The following excerpt from a related 2011 report by NCHS researchers Kristen Miller and J. Michael Ryan is a good synopsis of why “sexual identity”—rather than “sexual orientation”—became the focus of federal surveys. Miller’s and Ryan’s work helped create the sexual-identity-related questions in the first-ever NHIS report dealing with homosexuality. They write [emphasis added]:

It is important to note that although individuals may conceptualize their identity within a framework of who they have sex with or who they are attracted to, behavior and attraction in and of themselves do not constitute identity. It is the meaning—specifically the interpretations that the individuals assign those behaviors and experience—that defines how they ultimately conceptualize their identity.

Measuring sexual identity on a survey questionnaire, however, presents unique challenges. Sexual identity is a complex concept that is rooted in social and political contexts and can change over an individual’s life…While the concept of ‘sexual identity’ holds a particularly distinct and salient meaning for those identifying as lesbian, gay, bisexual or transgender, many non-minority [Editor’s note: read: straight] respondents do not hold salient sexual identities. Instead, these respondents (who for all intents and purposes would be categorized as being heterosexual), often dis-identify from a gay identity, possessing what is referred to as a ‘not-me’ identity…Rather than identifying as heterosexual, these respondents typically identify as ‘not gay’ or ‘normal.’ [Miller and Ryan, “Design, Development and Testing of the NHIS Sexual Identity Question,” NCHS, October 2011]

Translation: the overwhelming majority of Americans see themselves as normal, while a tiny minority sort out their aberrant sex- and gender “identities,” which can change over time.