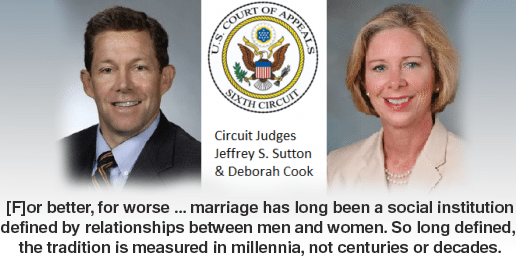 Finally, some common sense from appellate court judges.  In a 2-1 decision, the Sixth Circuit Court of Appeals decided that state laws in Kentucky, Michigan, Ohio, and Tennessee that define marriage as the union of one man and one woman do not violate the Constitution.

What is the government’s interest in marriage?

Homosexuals assert that marriage is constituted solely by love and has no inherent connection to sexual differentiation or the children who may result from conjugal coupling. Further, homosexuals believe that it is the presence of love that not only makes a union a marriage but that justifies government involvement in it.

Judge Jeffrey Sutton writing for the majority in the Sixth Circuit Court’s decision states that “One starts from the premise that governments got into the business of defining marriage, and remain in the business of defining marriage, not to regulate love but to regulate sex, most especially the intended and unintended effects of male-female intercourse.”

When “progressives” argue that marriage is constituted solely by love and commitment and that it has no inherent connection to procreation, then they have to explain why two brothers should not be permitted to marry. Why shouldn’t five people of assorted genders (or no gender) who love each other be permitted to marry? Why shouldn’t the non-erotic relationship between BFF’s be considered a “marriage”?

Dissenting judge liberal Martha Craig Daughtrey argued that in the nineteen states where homoerotic unions are now recognized as marriages “‘it doesn’t look like the sky is falling in.’” So, that’s her legal rationale? As long as legal change doesn’t result in a rapid, dramatic atmospheric calamity, it’s hunky dory? One wonders if Daughtrey thinks the sky would fall in if plural or incestuous unions were to be legalized.

As homosexuals continually and rightly assert, men and women are objectively and substantively different, and those differences are anatomical, biological, emotional, and psychological. A homoerotic union is as different from a heterosexual union as men are from women. A heterosexual union is different from a homoerotic union in objective ways pertaining to the procreation, needs, and rights of any children that may result from the type of sex act in which only men and women can engage. This type of union matters to government.

But what about the Left’s revisionist view of marriage as being constituted only by love? Are liberals similarly troubled by the fact that the government will never demand proof of the presence of love or attempt to compel couples to love one another? Will the unwillingness of the government to demand proof of love suggest a flaw in liberal arguments for redefining marriage?

According to the homosexual newspaper the Washington Blade, “When state attorneys made the arguments that bans on same-sex marriage had a rational basis because the purpose of marriage was procreation, Daughtrey took them to task, repeatedly asking them why excluding same-sex couples from the institution was necessary when opposite-sex couples can procreate with or without marriage.”

Daughtrey reveals both her ignorance and her liberal view that government creates reality.

A man and woman who engage in reproductive-type sexual activity (i.e., coitus) and conceive a child are in reality married because the central defining features of marriage are sexual differentiation and coitus. Marriage has a nature that predates the existence of formal legal institutions. Opposite-sex couples aren’t married because the government issues them a license. The government issues them a license to formalize marriage, which becomes actualized through conjugal unions—not through inherently sterile mutual masturbatory activity. Couples who engage in conjugal activity prior to acquiring a marriage license are in reality married. It isn’t the government that creates marriage. Government merely recognizes and regulates a type of union that in reality exists. We call that type of union marriage.

Since government does not create marriage, it cannot un-create it or recreate it. Thus, legally allowing two people of the same-sex to “marry” does not mean they’re married in anything other than a legal (de jure) sense. They are not married in reality because in reality marriage has a nature central to which is sexual differentiation, and without which a union is not marital.

If some silly government officials decided to issue dog licenses to cats because both dogs and cats have fur and four legs, some citizens—it is hoped—would recognize that dogs are in reality not cats because cats have natures that don’t change because the government issues a license.

The Left claims that children are “harmed” by not having their same-sex parents married. Since the Left worships at the woefully unstable altar of social science research, have liberal judges asked attorneys for homosexual couples to provide conclusive, incontrovertible sociological research demonstrating the ways these children are measurably harmed. Are children being raised by unmarried homosexual parents scoring lower on standardized tests? Are they abusing drugs and alcohol at higher rates than are children whose homosexual parents are married? What are the statistics on mental illness? Are their peer relationships more unstable?

If there is research demonstrating that these children suffer, have researchers controlled for all the factors that may contribute to their suffering? Is it the legal marital status of their parents that causes the harm or might it be the absence of either a mother or a father? Even President Barack Obama has publicly stated that both mothers and fathers are critical to children’s lives, and all children have both a mother and a father—even though some children are being deprived of relationships with them through the purchase of their DNA. Does it make sense that the marital status of homosexual parents would cause harm but being denied either a mother or father would not?

Some homosexual couples appeal to the self-consciousness their children feel about their parents not being legally married as evidence that same-sex “marriage” should be legalized. What does it mean then when children being raised by homosexuals feel self-conscious about not having a mother or a father?

Ironically, while the Left has been effective in selling the redefinition of marriage by asserting that marriage has nothing to do with procreation, William Harbison, attorney for the Tennessee same-sex couples in the Sixth Circuit Court case, complained that traditional marriage laws exclude “same-sex couples from anything related to procreation.” So, procreation matters in marriage law but only in so far as it satisfies the procreative desires of those who choose to be in inherently non-procreative relationships. While arguing that marriage is solely constituted by love and has nothing to do with procreation, “progressives” then use children’s needs, desires, and rights as a justification for changing the legal definition of marriage.

Let’s follow the logic of this revised revisionist view of marriage. If it’s love, commitment, and the presence of children (though not the begetting of children) that constitute “marriage,” then plural unions, incestuous unions, or any relational contexts in which children are being raised must logically be recognized as marriages.

Once the public becomes persuaded that love is all there is when it comes to marriage, they will start clamoring for the legalization of plural and incestuous unions. Once the notion that any adults raising children are entitled to have their relationships recognized as “marriages,” then judges will be obliged to find legal rationales to jettison requirements regarding monogamy and consanguinity from the legal definition of marriage—oh, unless doing so would cause the sky to fall in, which we won’t know until decades after platonic, plural, and incestuous marriages are legalized.  Once marriages are no longer restricted to erotic/sexual unions, the minimum age requirement too becomes irrelevant.

And at long last, we will arrive at the end game for the far Left: the destruction of marriage. Once society concludes that marriage is wholly a social construct with no objective nature, and once all criteria that define marriage are jettisoned so that any persons or number of persons can “marry,” marriage ceases to exist. Once marriage is anything, it’s nothing, with no relevance to the public good.