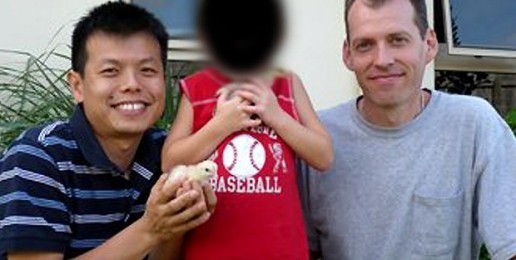 In 2010, the Australian press, as in thrall to the homosexual community as our ignorant, sycophantic America press is, told the foolishly titled story “Two dads are better than one,” about a homosexual couple who went to Russia to adopt a child. These “fathers” described the obstacles they faced in trying to find a surrogate in the U.S. and the scrutiny they faced when they returned to Australia with their child, all because of the suspicions of authorities who feared that two homosexual men might be pedophiles. The article concluded with this heartwarming quote: “’We’re a family just like any other family,’ [one of the fathers] said with pride.”

Fast forward to 2013. One of these two proud and ostensibly loving fathers, U.S.-Australian citizen Mark J. Newton was just convicted in an Indiana court of “conspiracy to sexually exploit a minor and conspiracy to possess child pornography” and sentenced to 40 years in prison.  Newton’s partner Peter Truong awaits trial on similar charges.

Multiple news reports state that there is video of one of the “fathers” performing a sex act on their son when he was two-weeks old. In addition, these men made their son sexually available from age 2-6 to at least eight other men in three countries. They also videotaped these sick crimes, posting the videos on the homosexual pedophile website “Boy Lovers Network.”

This story follows the 2012 story of Kenneth Brandt who adopted three boys and a girl and then raped and prostituted the boys.

And the Brandt story follows the 2011 story of “married” Connecticut couple George Harasz and Douglas Wirth who adopted nine boys, five of whom have accused the men of raping them.

I’m going to make the wildly politically incorrect statement that the male homosexual community has a serious problem with pedophilia, including its various incarnations like hebephilia and ephebophilia. To the uninitiated, those terms refer to the predator’s favored age of prey.

The Catholic Church’s sex abuse scandal was primarily homosexual in nature. In other words, all of the predators were male and the vast majority of their victims were male.

The Boys Scouts of America sex abuse scandal revealed in 2012 was entirely homosexual in nature, which is to say, male predators were preying on male children and teens.

Though male homosexuals constitute between 3-4 percent of the population, multiple reports suggest they commit a statistically higher rate of sexual abuse than do heterosexuals.

And let’s not forget that in virtually every society in history that accepted homosexuality, the dominant form was between adult males and pubescent boys. If you have a spare minute and a strong stomach, wander around a “gay” website. You will see photo upon photo of youthful, hairless boys who appear to be teens.

Sexual crimes against children are certainly not limited to the homosexual community. And I’m not arguing that all homosexuals are pedophiles. I am arguing, rather, that the homosexual community is not immune to the infection of pedophilia—or what some euphemistically refer to with the neologism “minor-attraction,” which to “minor-attracted persons” is just another “sexual orientation.” (And “sexual orientation” is itself a euphemism concocted to efface the difference between rightly ordered sexual impulses that are consonant with biology and anatomy and disordered sexual impulses that result in sterility and disease because they oppose biology and anatomy).

It just may be true that the community that pridefully celebrates that which is worthy of shame has an even more serious perversion problem than just the sexual desire of men for men.

I wonder if the poor little Russian boy whose mother sold him for 8,000 pieces of silver to evil men who used him as their sex toy will grow up to be sexually attracted to men. Oh wait, that can’t happen because the homosexual community says they’re “born that way.”

For multiple reasons children should not be placed in the homes of homosexuals. First, homosexual acts are inherently immoral. Second, there is evidence that many homosexuals find nothing problematic about sex between adult males and minors of diverse ages. Third, homosexual couples are more unstable than heterosexual couples. Fourth, for many male homosexual couples, fidelity does not include sexual monogamy. And finally,  children have an inherent right to be raised by a mother and father—roles that Barack Obama has publicly declared are essential to the lives of children even as he incoherently declares his support for a form of marriage that necessarily presupposes the expendability of either mothers or fathers.