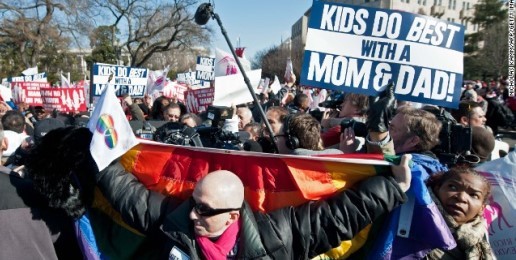 This is a collection of random thoughts on the U.S. Supreme Court’s hearings on whether to deconstruct marriage and refashion it in accordance with the desires of homosexuals.

Law professor Ilya Somin writing for the Volokh Conspiracy blog  dismisses the ontological differences between men and women that homosexuals themselves affirm:

In addition to discriminating on their face, laws banning same-sex marriage are also in part based on sweeping (and often empirically dubious) generalizations about the abilities and social roles of men and women….

When homosexual men and women assert that they are erotically and romantically attracted only to members of their own sex, they are acknowledging that men and women are substantively and significantly different and that those differences are not merely anatomical. Is it so irrational then to argue that these substantive differences inform parenting?

[I]f Sue loves Joe and Tom loves Joe, Sue can marry him and Tom can’t. And the difference is based upon their different sex. Why isn’t that a straightforward question of sexual discrimination?

This theory errs in that it presumes what it has not proved, which is that the sex of marriage partners is irrelevant to marriage. It simply presumes that sexual complementarity is not an essential constituent feature of marriage. It would be like saying, “12-year-old Sue loves 30-year-old Joe, and 27-year-old Ann loves 30-year-old Joe. Ann can marry Joe, and Sue can’t. Why isn’t that a straightforward question of age discrimination?”

It isn’t a straightforward question of age discrimination because in the case of the unique institution of marriage, the age of partners is integral.

Similarly, in the case of the unique institution of marriage, sexual differentiation is integral. Without it, a union ceases to be, in reality, marital.

Somin and many other marriage deconstruction advocates appeal to laws banning interracial marriages as apt analogies. But laws banning interracial marriages were wrong for the same reason laws permitting same-sex “marriages” are wrong: Both depend on wrong assumptions about the intrinsic nature of marriage. If marriage has a nature central to which is sexual differentiation, then marriage laws that recognize that ontological nature do not reflect invidious discrimination.

Meanwhile a twittering tweeter over on SCOTUSblog.com seemed inordinately impressed with this statement from Mary Bonauto, one of the attorney’s arguing for marriage deconstruction:

In terms of the question of who decides, it’s not about the court versus the states. It’s about the individual making the choice to marry and with whom to marry, or the government.

Seriously, an attorney is arguing that every individual should be able to decide what the government should recognize as a marriage. If that’s the case, then current marriage criteria regarding blood kinship and numbers of partners need to be jettisoned as well.

Justice Anthony Kennedy oddly views the role of both the legislative and judicial branches of government as dignity-dispensing. Here’s yet another remarkable Kennedy statement:

The whole purpose of marriage is to bestow dignity on sexually differentiated marital unions? Many Americans thought the inclusion of sexual differentiation in the legal definition of marriage was a recognition of the intrinsic nature of marriage and served to tie mothers and fathers to each other and to any children that may result from their sexual union, which in turn serves to protect the inherent needs and rights of children, which in turn serves the public good. The bestowal of dignity is decidedly not the “whole purpose of” the legal recognition of what marriage is, though it may be a beneficial consequence. In Kennedy’s alternate universe, which other relationship configurations merit the bestowal of dignity through access to legal marriage?  Incestuous unions? Incestuous homosexual unions? Polyamorous unions?

Even “dignity-bestowing” is largely a thing of the past. Large swaths of the population think no more of legal marriage than they do of co-habitation. But even prior to the “sexual revolution” that is responsible in large measure for the low regard with which the public holds marriage, the whole purpose of marriage never was solely or centrally to “bestow dignity” and “ennoblement” on man-woman unions.

Same-sex couples say…We know we can’t procreate, but we want the other attributes of it in order to show that we, too, have a dignity that can be fulfilled.

Second, Kennedy inadvertently gets to the heart of the mission of homosexuals to reinvent marriage in their own image when he says that they want “the other attributes of marriage” in the hope that the dignity imputed to marriage will be imputed to their unions. But the dignity that inheres marriage derives from its nature—not the word “marriage” or the license. Nonetheless,  homosexuals seek to obliterate in law and the public consciousness all ontological distinctions between heterosexual marriage and homoerotic non-marriage.

Questions I wish the Supreme Court had asked:

Does marriage have a nature that the government merely recognizes and regulates, or is it wholly a social construction with no intrinsic features?

If it has a nature, what are its essential, intrinsic features without which marriage ceases to be marriage?

What is the government’s interest in marriage?

Why does the government not recognize or regulate the union of those in platonic friendships as marriages?

Should those who experience other conditions similarly constituted be allowed to redefine marriage in accordance with their desires?