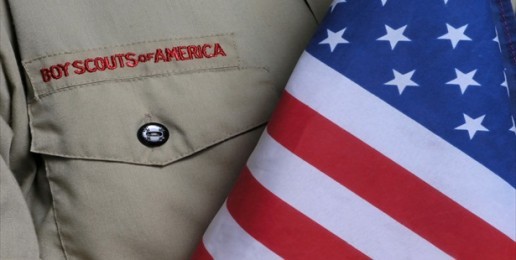 The Boy Scouts of America (BSA) has been under relentless assault by homosexual activists for years, and it appears the pressure is wearing down its leadership. The BSA may be poised to reverse its long-standing national policy that prohibits homosexuality in the Boy Scouts.

A review of the mission statement of the BSA and the Boy Scout Oath and Law are helpful in evaluating just how profoundly wrong the decision to change its policy on homosexuality would be.

The mission of the Boy Scouts of America is to prepare young people to make ethical and moral choices over their lifetimes by instilling in them the values of the Scout Oath and Law.

On my honor I will do my best
To do my duty to God and my country
and to obey the Scout Law;
To help other people at all times;
To keep myself physically strong,
mentally awake, and morally straight.

How does the BSA promote fidelity to God if it permits men or women who affirm that which God views as detestable (i.e., homosexual acts) to serve as role models and leaders?

And how does the BSA promote fidelity to an oath when with a finger held to the political wind and a vote, its leadership decides that the Boy Scouts’ long-held convictions are dispensable?

There exist objective truths regarding sexual morality, truths which if violated mar the image of God imprinted on men and women. When men have sex with men or women have sex with women, they demonstrate a profound disrespect for God and for themselves, which, although less important, violates the Boy Scout Law which asserts that “a Scout is … reverent.”

For more than 100 years, Scouting’s focus has been on working together to deliver the nation’s foremost youth program of character development and values-based leadership training….

Currently, the BSA is discussing potentially removing the national membership restriction regarding sexual orientation. This would mean there would no longer be any national policy regarding sexual orientation, and the chartered organizations that oversee and deliver Scouting would accept membership and select leaders consistent with each organization’s mission, principles, or religious beliefs. BSA members and parents would be able to choose a local unit that best meets the needs of their families.

This policy change would be a cowardly act because it would pass on to individual families the task of asking their local leaders what their policy is regarding homosexuality, which is far more difficult than having an established national policy. Maybe Deron Smith and other BSA leaders are able to deceive themselves into believing that such a policy change would constitute a “brave” and morally defensible act, but countless Americans know otherwise. This would be an act of cowardice driven by fear of perpetual slandering by homosexual activists and pressure from soulless corporations that do not have character formation as integral to their mission and yet self-righteously pretend they do.

In response to the announcement by Deron Smith, the Gay & Lesbian Alliance Against Defamation (GLAAD) president, Herndon Graddick prematurely exulted, “The Boy Scouts of America have heard from scouts, corporations and millions of Americans that discriminating against gay scouts and scout leaders is wrong. Scouting is a valuable institution and this change will only strengthen its core principles of fairness and respect.”

In referring to “discrimination,” Graddick exploits the language of racial injustice. But making distinctions between moral and immoral sexual acts bears no similarity whatsoever to illegitimate discrimination of persons based on non-behavioral characteristics like race.

Graddick’s reference to “corporations” should remind Americans not to underestimate the influence of corporate pressure. Money is the driving force behind this possible policy reversal. Does anyone really believe that most parents who support Boy Scouts want homosexual men to contribute to the formation of their sons’ moral character?

Parents and other BSA supporters shouldn’t be duped into believing that this policy change, which would leave decisions regarding homosexuality to local organizations, will be left alone. Zach Wahls, Eagle Scout and founder of Scouts for Equality—who, interestingly, was raised by two lesbians—made clear that the relentless assault on the BSA’s commitment to sexual morality will continue unabated until every troop abandons moral convictions: “’We look forward to working with BSA Councils and chartering organizations across the country to end the exclusion of our gay brothers in Scouting, as well as the gay and lesbian leaders who serve the organizations so well.’” Regarding the possibility of only some clubs allowing homosexual members, Wahl correctly and ominously proclaimed, “‘Once you’ve started to introduce openly gay members, there’s no way to stop it.’”

Watching a Bully Get Smacked
b
a
x
r