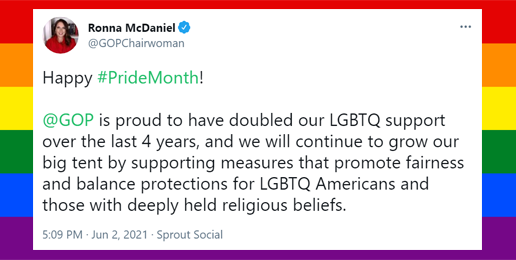 Outrageous Tweet ‘o’ the Month is this from Republican National Committee chair Ronna McDaniel on June 2, 2021, in honor of “pride” month:

@GOP is proud to have doubled our LGBTQ support over the last 4 years, and we will continue to grow our big tent by supporting measures that promote fairness and balance protections for LGBTQ Americans and those with deeply religious beliefs.

Let’s break that down into all its troubling pieces for a close analysis that should reveal why McDaniel must step down:

To have the head of the Republican Party celebrate the egregious sins of homosexuality and cross-sex impersonation should shock and outrage Republicans. “LGB” and “T” activism pose the greatest threat to First Amendment protections of speech and religious exercise ever posed in American history. The normalization and celebration of homoeroticism and cross-sex impersonation are destroying individual lives, the bodies of children, families, privacy rights, the safety of girls and women, women’s sports, churches, government schools, colleges and universities, and the arts. And we have the head of the only party ostensibly committed to protecting life, the family, and religious liberty celebrating that which is destroying America.

With unprincipled, myopic pragmatists like that, who needs enemies.

Take ACTION: Click HERE to send a message to GOP leaders (state and nation) urging them to call for Ronna McDaniel to step down for her ignorance and failure to uphold foundational principles critical to the health and future of America.

The GOP’s Shameful “Pride Coalition”
b
a
x
r