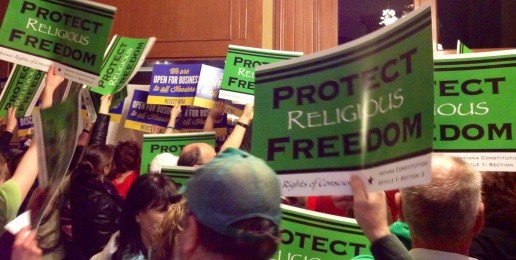 In the wake of Governor Pence’s courageous act, he and Indiana have been the recipients of blistering attacks, both verbal and fiscal.

As usual when blustery homosexual activism is involved, ironies abound. Marc Benioff, CEO of San Francisco-based company Salesforce has canceled “all programs that require our customers/employees to travel to Indiana to face discrimination” (while it continues its business dealings in China—the font and source of human rights protections).

Since the Indiana law is similar to the federal RFRA law sponsored in the U.S. House by New York Democrat Chuck Shumer, passed by the U.S. Senate 97-3, and signed into law by President Bill Clinton, what, pray tell, is Benioff worried about? Does he worry that during a business trip, his customers or employees will suddenly decide to order a wedding cake to be transported back to San Francisco?

The law does not provide absolute, unfettered freedom to people of faith to do just anything they want. Nor are people of faith seeking absolute unfettered freedom to do just anything they want. This law reinforces First Amendment protections against the increasing encroachment of government impelled most often by homosexual activists.

Indiana’s RFRA is carefully worded to protect the right of people of faith who are engaged in commerce to allow their business decisions to be informed by their faith. Christians understand what many homosexual activists and their ideological allies seem not to, which is that the totality of life should conform to biblical principles. The free exercise of religion is not limited to hearts, homes, and pews.

Governor Mike Pence has the U.S. Constitution on his side. He has court precedent on his side. He has the precedents set in 19 other states that have RFRA laws, including blue Illinois. But opposition to this law include marauding bands of hate-mongering homosexual activists, arrogant Hollywood lemmings, and feckless captains of industry.

Homosexual activists, fancying themselves the heir apparent to the great civil rights leaders, are in the vanguard of the assault on the Hoosier state.

Following close behind is Hollywood—widely known for arrogance, ignorance, immorality, vanity, and cool-crowd-following.

And then bringing up the rear with powerful reinforcements are business leaders—rarely noted for their deep thinking on matters moral, ethical, or philosophical.  With their pockets lined with lucre, they’re responding to the vitriol from homosexual activists with reflexive knee jerks that enhance their pride in their own pretense of moral courage. Does anyone believe these business leaders have thought deeply about the First Amendment, homosexuality, or marriage? One of the chief goals of business leaders is to make business decisions that increase profits, but no responsible business leader can divorce profit from principle—and by principle, I mean right principle.

What is astounding in this brouhaha is the deceit of the Left. Homosexual activists and their media sycophants continue to proclaim—without evidence—that, for example, Christians owners of wedding-related businesses are seeking to refuse to serve homosexuals. But refusing to use their gifts, labor, and time to produce a product or provide a service for a celebration that violates their religious beliefs does not constitute a refusal to serve homosexuals. In fact, the cases that have been in the press actually expose the Leftist lie, because the owners of the wedding-related businesses have, indeed, served homosexuals on multiple occasions prior to the wedding-related requests.

Religious-owners of businesses should be allowed to discriminate between types of events and products when making business-decisions regarding the provision of their goods and services. Experiencing homoerotic desire and affirming a homoerotic identity does not give men and women absolute dictatorial authority to command what kinds of events religious owners of businesses will serve or what types of products they will make. Homoerotic desire does not supersede religious liberty—or in a sane and moral universe, it would not.

Christians, Jews, and Muslims should be allowed to refuse to provide goods and services for bisexuals’, polygamists’, or polyamorists’ commitment ceremonies or in the near future, weddings (which could be construed as discrimination based on “sexual orientation.”)

Christians and Jews should be allowed to refuse to provide goods and services for pro-Hamas events (which could be construed as discrimination based on religion).

Christians should be allowed to refuse to provide goods and services for events sponsored by eugenics organizations like Planned Parenthood (which in the mad, mad, mad, mad world of feminism that sees a war on women everywhere could be construed as discrimination based on sex).

And Christians should be allowed to refuse to provide services for GLSEN events. Though dogmatic Leftist ideologues would likely construe such refusal as discrimination against homosexuals, it would, in reality, reflect the kind of business decision that Mark Benioff thinks he’s making. Refusing to provide goods and services for a GLSEN event would reflect a principled objection to the event—not the people hosting it.

Other organizations threatening to reconsider their involvement with Indiana include, Eli Lilly, Yelp, Angie’s List, the NCAA, and (irony of ironies) the Disciples of Christ denomination, which apparently supports religious discrimination.

Where do we witness courage? We are witnessing courage through the heroic actions of Mike Pence and every Hoosier who defends him and this law with unwavering steadfastness in the face of withering assaults. Another biblical allusion comes to mind. It appears the citizens of Sodom are clamoring at Lot’s door.

But we can do something.