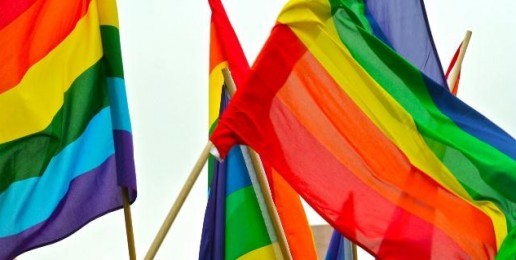 1.)  I received an email last week from a Christian who was upset that I published the loathsome video of Dan Savage even though I provided ample warning that the content was offensive. It seems appropriate, therefore, to revisit the reasons we occasionally publish either obscene hateful emails we receive, excerpts from offensive novels taught in our public schools, or video reminders of infamous homosexual “anti-bullying” bully, Dan Savage.

We do not expose the dark realities of this pernicious movement in order to be sensationalistic or titillating. We do it because Americans are inundated daily with images and words about homoeroticism intended to desensitize, sooth, and confuse. These words and images are built on a foundation of unarticulated and/or unexamined false assumptions and lies that are persuading even Christians that wrong is right.

Unfortunately, many conservatives do not fully realize the evil nature of the enemy we fight. And merely describing it does not adequately convey how profoundly wicked it is. Without a fuller apprehension of the nature and extent of the evil, many Christians are complacent and silent. Often it is only an encounter with such evil that generates a proper response from Christians.

I am not equating the enormity of the evil of the Holocaust and the American genocide of pre-born babies to that of the homosexuality-affirming movement. I am, rather, illuminating the necessity of occasionally viewing the evil in our midst about which humans have a remarkable capacity to delude themselves.

As Christians, however, we should remain conscious of the fact that a life of unrepentant homoerotic activity will result in eternal separation from God. How do we measure the magnitude of temporal suffering relative to that of eternal suffering?

2.)  The oft-repeated claim that affirming homoerotic identity politics signifies being “on the right side of history,” requires prior acceptance of factual errors and unexamined assumptions. History does, indeed, move on, but it is a mistake to believe that history marches perpetually toward truth.

Far too many Christians have failed to heed the warnings of those Christians—often marginalized by the lies of the Left—who have been predicting for decades the social, moral, political, and theological upheaval that would follow if society were to accept homoerotic activity as the moral equivalent of natural sex between men and women. Church leaders should have been on the forefront of relentlessly exposing, critiquing, and challenging the fallacious ideas that propel the pro-homoerotic juggernaut that portends temporal and eternal suffering for those the church claims to love.  The cowardly and foolish failure of Christendom—both church leaders and their flocks—to engage in the intellectual, spiritual, and cultural work—including political work–required of them is just beginning to bear its diseased fruit.

The homosexuality-affirming movement has been built on fallacious arguments. Tragically, when every last lie is exposed as such, it won’t matter because homosexual activists will have achieved their culture-destroying goals: Widespread cultural approval (not tolerance, but approval) of homoerotic identity politics and the demonization of right moral thinking will be a fait accompli. It will no longer matter to the unthinking masses that this cultural revolution was built on spider’s web of fallacious claims.

3.)  Christians seem to believe the Left’s relentless claim that it is orthodox Christians espousing true biblical beliefs with civility that cause teens who experience same-sex attraction to be bullied and contemplate suicide. Through this exploitation of the suffering of children and teens, the Left has been effective at persuading Christians to self-censor.

Here are some other ideas on which Christians should spend some time ruminating:

4.)   The Left feigns indignation and even outrage at comparisons of homoeroticism to polyamory or consensual adult incest. But understand this, their indignation is but a deflection and distraction, a red herring designed to silence their opponents without having to respond to an argument. They feign anger that anyone would dare compare homoeroticism to any conditions or behaviors that they believe are actually immoral. Of course, the moral status of homoerotic acts is precisely the controversial issue. (As an aside, inquiring minds would like to know if those homosexuals who express such outrage actually hate polyamorists and those who “love” their siblings.)

What dupes and cowards Christians are. What poor servants of the one who willingly died for us. While Christ died a humiliating and horrifying death for us, we’re unwilling to endure any degree of discomfort for him. As we welcome each sophistical lie with a secret sigh of relief for being offered a rationalization to justify either our silence or capitulation, we facilitate evil. Those who experience unchosen same-sex attraction are not evil. They are sinners just like every other human—save one—who has ever existed. We all experience myriad powerful, persistent, unchosen feelings.  Our task as moral beings is to figure out upon which of these feelings it is morally legitimate to act. Christians do no service to God, women, children, men, or their country when they refuse to speak the truth about homosexuality. Instead, we help push America into the historical abyss.

“And he said to all, ‘If anyone would come after me,
let him deny himself and take up his cross daily and follow me’”
(Luke 9:23).