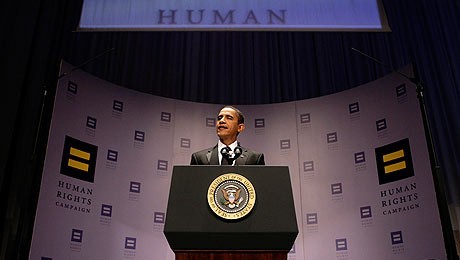 Obama began by thanking the HRC for the work they do “every day in pursuit of equality on behalf of the millions of people . . . who are gay, lesbian, bisexual, or transgender.” The HRC does not work for equality. They work to compel societal approval of volitional homosexual acts. Nor do they seek tolerance, which means to put up with something objectionable. Rather, they seek affirmation, and they pursue it by deliberately misconstruing moral claims as bias, bigotry, discrimination, and hatred.

Homosexualists don’t apply their assumptions regarding what constitutes hatred consistently. They don’t, for example, view moral disapproval of polyamory as hatred of polyamorous people or moral disapproval of paraphilias as hatred of paraphiliacs. The belief that homosexuality, cross-dressing, and elective amputations of sexual anatomy are immoral is the one moral claim that they have successfully misconstrued in the minds of many as hatred.

Obama laughably described the HRC as advocating “on behalf of those without a voice.” To suggest that in the last thirty years homosexuals have had no voice is ludicrous at best, utterly deceitful at worst. It’s hard to defend the claim that homosexuals are voiceless when they are trumpeting their subversive views through the arts and entertainment industry, public education, and myriad organizations like the Human Rights Campaign; the Gay, Lesbian and Straight Education Network; the National Education Association; The Southern Poverty Law Center; the Gay & Lesbian Alliance Against Defamation; the Safe Schools Coalition; the National Lesbian and Gay Journalists Association; the American Library Association; and the Transgender Law Center.

Obama fretted about laws that yet remain to be changed and hearts that yet remain to be opened, condescendingly describing “fellow citizens, perhaps neighbors, even loved ones — good and decent people — who hold fast to outworn arguments and old attitudes.” Although the beliefs that same-sex attraction is disordered and that volitional homosexual acts are immoral are most certainly enduring, they’re no more outworn than are the beliefs that sexual attraction to one’s parent is disordered and that sexual engagement with one’s parent is immoral. Moreover, the belief that homosexual acts are immoral does not suggest a “closed heart.” If, in reality, homosexual acts are objectively disordered and contrary to God’s will, telling others that hard truth constitutes an act of genuine love.

Obama also faults those he claims would deny homosexuals “the rights most Americans take for granted.” We as a society, however, ought never come to the place where we start ascribing rights to people based on their subjective, emotional desires, sexual attractions, and volitional sexual conduct. And we ought never deprive citizens of their right to freely associate or not with those whose public conduct and espoused beliefs they find objectionable and destructive. I should have the right not to rent an apartment in a building I own to an unmarried heterosexual couple, an incestuous couple, a polyamorous union, or a homosexual couple.

Obama disingenuously claimed that it is the “force of the arguments” homosexuals make and “quiet, personal acts of compassion — and defiance” that have brought about change. He’s right. It has been acts of defiance and rebellion that have resulted in the tragic cultural shifts we are seeing. Defiance; rebellion; libertinism; false arguments; judicial activism; censorship; the exploitation of public education, and the use of epithetic language are just some of the behaviors and tactics that have transformed the culture in foolish and destructive ways–ways which Obama calls “progress.”

Obama appealed to foundational American principles when he described a movement to legitimize deviant sex as a “movement for fairness and equality, and not just for those who are gay, but for all those in our history who’ve been denied the rights and responsibilities of citizenship.” But what rights and responsibilities have homosexual men and women been denied? Despite obscurantist arguments to the contrary, all homosexuals have access to marriage. Men who want to have sex with men and women who want to have sex with women do not constitute some particular class of people denied access to marriage. The truth is that they don’t want to participate in the institution of marriage whose cornerstone and central feature is sexual complementarity. The particular sexual proclivities of those who experience same-sex attraction do not entitle them unilaterally to change the definition of marriage to fit their own inclinations.

Softening the image of the riots that sparked another phase of the sexual revolution, Obama referred to the “Stonewall protests, when a group of citizens with few options, and fewer supporters stood up against discrimination and helped to inspire a movement.” He’s right again: we should support those who experience intense, persistent, and seemingly intractable desires: we should support them in their efforts to resist those impulses. We should come alongside them, pray with and for them, and love them through their difficult struggle to submit to God’s will. But we must never support them in their sin or treat their sin as if it’s good, beautiful, or worthy of affirmation.

Nobel Peace Prize-winner Barack Obama declared that he is with homosexuals in their fight to elect candidates who share their values, and he’s with them in their “stand” against those who would enshrine “discrimination” into our Constitution, and he’s with them in their fight for “progress” in our capital and across America. Obama announced that he desires that all Americans would come to view homosexual relationships as just as “admirable” as heterosexual relationships. Clearly, his fight for public affirmation of homosexuality; his unequivocal opposition to historical views of sexual morality; his willingness to aggressively use legislation to promote controversial, unproven sexual theories; and his battle-ready stance to promote heresy prove that he is man committed to public peace.