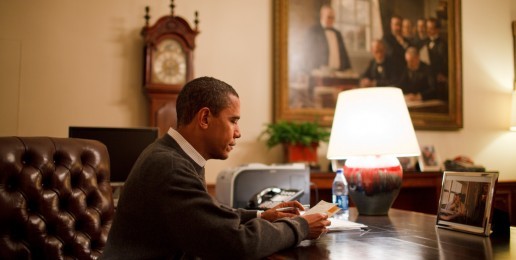 In the midst of one of the recent steps further into cultural darkness, a spark of light glimmered Sunday when Steve Farish, pastor of Crossroads Church in Grayslake, Illinois, distributed a brief note to his congregation regarding President Obama’s stunning decision to order the Department of Justice to cease defending in court the Federal Defense of Marriage Act (DOMA). In it he shared the email he sent President Obama, but more important, he urged his congregation to do likewise. It is the hope and fervent prayer of Illinois Family Institute that other faith leaders will demonstrate such courage and wisdom.

Everyone I know who works full-time on cultural issues shares the same anguish and frustration about the church. We know that until Christians awaken from their moral slumber, become willing to be persecuted for their faith, and participate in the cultural debate on all issues relating to homosexuality, suffering will increase.

But as I write this, I feel hopeful because of this brief note from a pastor willing to be persecuted for his Lord and Savior and willing to lead his flock:

My Dear Brothers and Sisters in Christ:

There are times when events signal the moral decline of our society so clearly that I believe God calls Christians to respond. One such time was this past Wednesday when the United States Attorney General announced that the current executive administration has suddenly reversed course and now will argue in court that the Defense of Marriage Act of 1996 is unconstitutional. The Defense of Marriage Act defines marriage as a relationship between one man and one woman. I believe this decision profoundly hurts all Americans, perhaps especially those who practice a homosexual lifestyle who are the very people the administration wrongly believes it is helping. Below is the text of an email I sent on Thursday to the White House, and I urge you to send a similar note to the president in your own words (www.WhiteHouse.gov).

Thanks, and God bless you!

My heart was broken yesterday to hear Attorney General Holder’s announcement that your administration has suddenly shifted its position and now believes the Defense of Marriage Act of 1996 to be unconstitutional. Mr. President, with all due respect to you personally, the God who created and rules the universe — the God who put you into office (Romans 13:1) — from the beginning gave us human beings our sexuality as a gift to be enjoyed only in the covenant bonds of marriage between one man and one woman (Genesis 2:24). Our Creator gave us this command as an expression of his infinite wisdom and love for all human beings, and whenever we violate his command for use of our sexuality, we can reap only a harvest of brokenness and pain. The decision of your administration concerning the Defense of Marriage Act will therefore only serve to hurt human beings, both those who practice a homosexual lifestyle and those who do not. I plead with you, for the sake of this nation’s future, to reconsider your decision on the Defense of Marriage Act and reverse it immediately.

Thank you for your kind consideration of this most urgent, heartfelt, and respectful request.