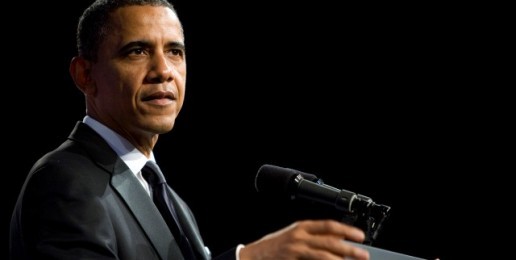 On Wednesday afternoon, President Obama announced that he supports same-sex marriage. This was not exactly a surprise.

Sure, when running for Senate in 2004, Obama said that “marriage is between a man and a woman.” And when campaigning for the presidency in 2008, he restated that view and also claimed he did “not support gay marriage.”

The truth, however, is that President Obama has repeatedly done and said things that directly undermine marriage as one man and one woman.

President Obama has openly opposed state marriage amendments, such as Proposition 8 in California and the hugely successful amendment adopted by voters in North Carolina earlier this week. These amendments would protect marriage from judicial activism in state courts and let voters decide the question through democratic processes. But Obama views such measures as “divisive” and “discriminatory.”

President Obama also supports repealing the Defense of Marriage Act (DOMA), a federal law that defines marriage as the union of one man and one woman for purposes of federal law. And President Obama’s Justice Department has taken extraordinary steps to undermine DOMA in the courts, first by offering a soft defense and then by offering no defense at all.

These seeming inconsistencies led many to conclude that the President wasn’t really against gay marriage but was saying so for political reasons. Now, the President has finally owned up to what many people already suspected: that he supports same-sex marriage.

It is good that President Obama has decided to be more straightforward about what he really believes about marriage. The American public deserves at least that much.

But the President’s so-called “evolution” on the timeless institution of marriage marks an unfortunate turn. Society has a civilizational interest in promoting marital childbearing and the faithfulness of husbands and wives to each other and their children. Marriage is a vital social institution that promotes that interest.

The reason the state is in the marriage business in the first place is because sex makes babies and babies need mothers and fathers. As one source has put it, “but for children, there would be no need of any institution concerned with sex.” That “institution” is marriage, and it brings together men and women as husbands and wives to become fathers and mothers to any children their unions bring forth.

This binding together doesn’t happen by accident. Binding fathers to mothers and their children requires strong cultural and legal norms to channel adult sexual desire and behavior into an institution where childbearing leads to responsible childrearing.

Furthermore, undoubtedly one reason voters in 32 states have voted to protect marriage is the belief that, for children, the ideal situation is to have both a mother and a father. This belief is supported by social science, which demonstrates that children do best when reared by their married biological mothers and fathers. Mothering and fathering are not interchangeable phenomena. The ideal for children is love and attention from both a father and mother, as well as the role modeling that each can provide of masculinity and femininity.

By embracing same-sex marriage, President Obama has invited everyone in the nation to consider this basic issue: What is marriage? The President has sided with those who would redefine marriage by declaring that mothers and fathers are expendable and sexual complementarity does not matter. Under this view, marriage is whatever two consenting adults want it to be.

But once the President accepts these ideas, can he explain why marriage should involve only two people? Can he explain why, under his conception, childrearing would continue to have any meaningful relationship to marriage? Can he explain why commitments of permanence and sexual exclusivity should be the norm for marriage? Throw away the core meaning of marriage and these cherished norms logically go with it.

There is a truth about marriage, and most people intuitively grasp that it has something to with mothers and fathers, the offspring they bear through sexual union, and the mutual cooperation required to effectively rear offspring throughout many years of dependency. The marriage debate is about whether our laws will recognize and promote this truth or, rather, label it a falsehood and force society to fall in line.

President Obama has made clear where he stands on this issue. In the coming months, voting members of the American public will have the opportunity to do the same.