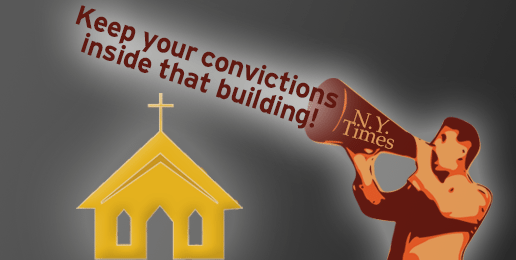 Openly homosexual New York Times op-ed columnist Frank Bruni has announced his generous support for the right of people of faith “to believe what they do and say what they wish—in their pews, homes and hearts.” (emphasis added).

The hubris of “progressives,” particularly “progressives” of a particular rainbow-hued stripe, seems to know no bounds. According to Bruni, conservative Christians must relinquish their constitutionally protected right to the free exercise of religion on his altar to the god of homoeroticism.

The First Amendment was intended to protect the right of people of faith to practice their religion unencumbered by government, which has the unruly tendency to intrude into areas of human life into which it ought not intrude. The Free Exercise Clause was intended to provide broad protections for the exercise of religion—which is not limited to pews, homes, and hearts, and not abrogated by homoeroticism.

Or imagine if those homosexuals who attend churches that embrace late 20th Century, heterodox theology and as a result support legalized same-sex faux-“marriage” were told that they could believe what they wish and say what they wish only in their pews, homes, and hearts. In other words, they should lose the right to affect public policy or allow their business practices to reflect their religious beliefs.

The inconvenient truth for Bruni is that Christian florists and bakers are seeking neither to exile homosexuals nor to refuse to serve customers who affirm a homoerotic identity. Rather, they’re refusing to use their time, gifts, and labor to make a particular product that celebrates an event that the God they serve abhors. In reality, these same florists and bakers have actually served on multiple occasions the very homosexuals who are suing them for not making products for their “weddings.”

Bruni then digs in with his floppy shovel, suggesting that not making a cake or floral arrangement  for a same-sex “wedding” is analogous to a Muslim store-owner refusing to serve a woman whose head is not covered or a Mormon hairdresser turning away clients “who saunter in with frappuccinos.”

In other words, Bruni suggests that when a baker chooses not to make a particular product for a particular type of event—and a type of event for which this baker has never made a product—it is analogous to a business-owner demanding that a customer adopt the owner’s religious practices in order to be able to purchase a product or service.

So, the request of homosexuals for a cake for their “wedding” is not the same as a request from a heterosexual couple for a cake for their wedding. Homosexuals are seeking to compel bakers to make a product for an entirely different type of event, and one which the bakers believe mocks real marriage and offends God.

Bruni trots out and beats the dying but still useful homosexuality = race horse: “As these lamentations about religious liberty get tossed around, it’s worth remembering that racists have used the same argument to try to perpetuate segregation.” It’s also worth remembering that the fact that one group of people with a gross misunderstanding of Scripture appealed to religious liberty to defend evil practices does not mean all groups who appeal to religious liberty are guilty of engaging in evil practices or of grossly misinterpreting Scripture.

Moreover, it makes no rational sense to compare a condition like race that has no inherent connection to either feelings or volitional acts to homoeroticism which is constituted solely by feelings and volitional acts.

Since Bruni is busy declaring the boundaries in which people of faith may exercise their religion, maybe Bruni can help us out by answering these questions:

Bruni makes clear the error in his thinking when he says that Christian bakers, photographers, and florists “are routinely interacting with customers who behave in ways they deem sinful. They don’t get to single out one group of supposed sinners. If they’re allowed to, who’s to say they’ll stop at that group?”

Well, God may beg to differ with Bruni:

Due to the astonishing influence of homosexual and “trans” activism and the unbiblical cowardice of Christians—including especially Christian leaders—we’re going to see the government increasingly making demands on Christians with which Christians ought not comply. It is during those times that Christians should remember that we are commanded to “Render to Caesar the things that are Caesar’s, and to God the things that are God’s.”