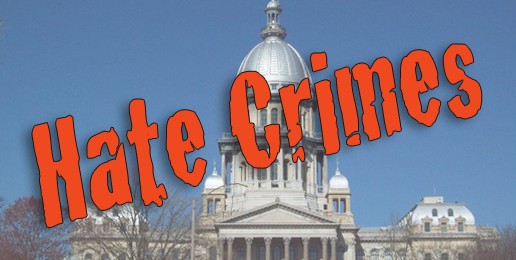 While media pundits and liberal activists feign “concern” about the prominence of “social issues” in the GOP primary race for president, liberal activists tirelessly work to advance their social agenda. Whether it is the mandate from Washington D.C. that requires all healthcare insurance plans to provide free contraceptives, abortifacients, and sterilization services or the introduction of a “same-sex marriage” bill in Springfield merely nine months after “civil unions” became legal in Illinois, the Left aggressively promotes its social agenda, often with the approval of the mainstream media.

But it is Rep. Cassidy’s sponsorship of a legislative proposal that would add Gender Identity Disorder (euphemistically referred to as “gender identity”) to the existing “hate crime” law in Illinois (HB 4725) that is the subject of this article.

Enumerated “hate crime” laws are intellectually and ethically flawed and dangerous. This proposed amendment would only make a bad law worse.

It is important to remember that opposition to hate crime laws does not constitute endorsement of criminal acts committed against anyone. One can oppose both criminal acts of all kinds and the pernicious purported solution of hate crime laws, which pose a serious threat to liberty.

Take ACTION: Click HERE to contact your state representative to ask him/her to oppose HB 4725 and the addition of Gender Identity Disorder to existing hate crime law. You can also call the Springfield switchboard at (217) 782-2000 and speak to your local representative’s administrative aide about your concerns with this proposal.

It is interesting to note that this bill was originally heard in the Judiciary II committee last Friday, but failed by a vote of 2 yea, 2 nay and 3 present.  Yesterday, however, two of the lawmakers who voted “present” [Reps. Bill Cunningham (D-Chicago) and Esther Golar (D-Chicago)] were substituted by Rep. Toni Berrios (D-Chicago) and the chief sponsor of the legislation, Rep. Cassidy. Obviously, Rep. Cassidy, who was appointed to the General Assembly last summer, has enough clout with Speaker Michael Madigan (D-Chicago) for this kind of maneuvering. This exposes Madigan’s eagerness to cater to the aggressive efforts of homosexual activists to promote their “social issues” in the General Assembly.

Prosecution is selective. This means that the district attorney or prosecutor decides which cases to pursue and which to dismiss. They also decide which charges to file. In most cases this is mainly about expediency, but there is always an element of politics involved. When it comes to hate crimes, the political element grows immensely in a potential prosecution. This is because the hate crime casts an offense against an individual or small group of individuals as an offense against an entire demographic subset.

Problems with the inclusion of the term “gender identity”:

We are becoming a society increasingly removed from fundamental American principles of justice. The law is being used to treat people differently depending on their group membership and to invade the thoughts minds and feelings of people, all in the service of transforming the social, moral, and political beliefs of Americans.