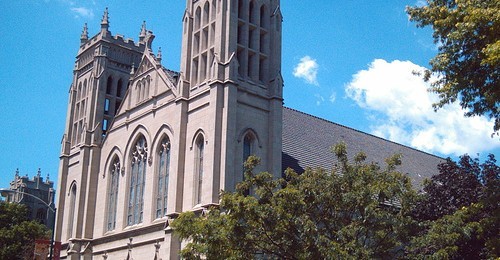 I’m reluctant to beat a dead horse, but in light of a comment made by the pastor of Our Lady of Mount Carmel Church and an editorial in the liberal National Catholic Reporter (NCR), a bit more needs to be said about the “gay pride” parade brouhaha.

1.   In addition to the cowardice of conservatives, it is the failures of religious leaders that have helped create the cultural mess we’re in right now. NCR recently wrote favorably about this portion of a statement issued by Our Lady of Mount Carmel’s pastor, Fr. Thomas Srenn:

The annual Pride Parade is one of the hallmarks that make Lakeview unique and we in no way wish to diminish its place in the community.

This should be a deeply troubling comment coming from any Christian leader, whether Catholic or Protestant. The word “hallmark” means either “a mark indicating quality or excellence” or “a conspicuous feature.” Perhaps Fr. Srenn is a skillful rhetorician and was deliberately playing on that ambiguity. Perhaps he thinks the parade is a conspicuous and obnoxious Lakeview feature but hopes that others will assume he finds it an excellent Lakeview feature.

But, viewed in light of the second half of his statement, that is to say, his wish that the parade’s “place in the community” not be diminished, it seems more likely that he looks on the parade positively.

Such a view would be at minimum an odd notion coming from a Catholic priest, presumably well-schooled in theology. How can a Catholic priest view positively a parade that celebrates that which the Catholic Church views as profoundly sinful? I wonder too if he would be willing to invite children to attend this hallmark of the unique Lakeview community.

Come to think of it, why hasn’t there been an editorial in the Chicago Tribune arguing that the comparison of race to homosexuality is bizarre?

Conservatives, like all other humans, are ridicule-averse. Ridicule conservatives. Call them homophobes, bullies, haters, and bigots. Call them old-fashioned and out-of-step with the times. Suggest that Lady Gaga would find them totally uncool, and you win the debate through the cowardly forfeit of conservatives.

5.   I would not have used the analogy Cardinal George used, but not because it lacks soundness. I wouldn’t have used it because the emotion it generates within the perpetually petulant world of homosexual activists creates such a gaseous environment, it clouds even what passes for discourse today.

The reality is any comparison of homosexuality to any behavior of which society still has permission to disapprove will generate bilious howls of outrage and nastiness from homosexual activists. The closest analogue to homosexuality is not race or skin color. The closest analogue is polyamory or adult consensual incest. Try using those, especially the latter, and witness the torrent of non-rational, ad hominem-infused, fire-breathing that ensues from homosexual activists.