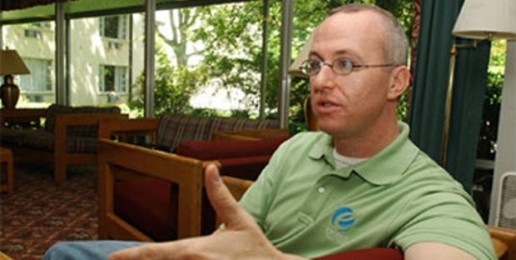 Exodus International president Alan Chambers has, in the past week, explained the Orlando-based ministry’s recent U-turn on reparative therapy to everyone from The New York Times to NPR to MSNBC’s Hardball.

And while the organization’s stance remains acceptable to most evangelicals, some scholars fear that Chambers’s theological convictions—sprinkled throughout those interviews—have not.

“It’s not that he is simply not saying the warnings [against homosexual activity] in Scripture. I could live with that,” Pittsburgh Theological Seminary professor Robert Gagnon said of Chambers’s recent comments. “It’s that he is saying the exact opposite of what Scripture clearly teaches … . He’s preaching an anti-gospel.”

The theological heresy in question is antinomianism. The term was coined by Martin Luther to refer to those who believe that since faith is sufficient for salvation, Christians are not obligated to keep God’s moral law.

Gagnon, author of The Bible and Homosexual Practice and a plenary speaker at Exodus’s 2009 Freedom Conference, said that a June interview in The Atlantic shows that Chambers’s views have veered. “Some of us choose very different lives than others,” Chambers said of gay Christians in same-sex marriages. “But whatever we choose, it doesn’t remove our relationship with God.”

When asked to clarify whether or not that meant “a person living a gay lifestyle won’t go to hell, as long as he or she accepts Jesus Christ as personal savior,” he replied, “My personal belief is … while behavior matters, those things don’t interrupt someone’s relationship with Christ.” In the course of the interview, Chambers made it clear that he believes that homosexual acts are sinful.

A 35-page response written by Gagnon called into question not only Chambers’s soteriology, but also his ability to continue his 11-plus years of leading Exodus, which boasts some 260 affiliates domestically and internationally.

According to Gagnon, Chambers’s statements unwittingly affirm that active homosexuals need only make an “intellectual assent” or “pray a prayer” to guard against eternal punishment, instead of stipulating the importance of repentance and change.

“I am not saying [Chambers] has to—in a sort of callous, unloving way—shout from the rooftops, ‘You are going to hell,'” said Gagnon. “But he does need to make clear that there are these warnings [against homosexual behavior] in Scripture. It would be unloving and ungracious for him to assure people of things that Scripture does not.”

Echoing the criticisms of “cheap grace” popularized by the late German theologian Dietrich Bonhoeffer, Gagnon said that Chambers’s remarks “provide assurance to people that all is well when they live a life not led by the power of the Holy Spirit, but are led by the controlling influence of sin.”

“In reality, all is not well,” he said. “[Chambers] unintentionally deceives people into extending this philosophy of ‘cheap grace’ in their life, which puts them at risk of not inheriting the kingdom [of God].”

Defending his public remarks, Chambers told Christianity Today, “If someone tells me that they have a saving relationship with Jesus Christ—in the way I understand it and have experienced it—they still know Jesus regardless of what types of behavior they’ve chosen to be involved in.”

“I don’t know how anyone could call grace cheap when it cost Jesus everything,” said Chambers. “I find it disheartening that we [evangelicals] are so inconsistent and over-focused on one group of people over another. We aren’t talking about this in any other subculture of people except this one [the LGBTQ community].”

Chambers says he isn’t advocating that gay Christians simply “lie down and give up.” The 40-year-old ex-gay husband and father of two maintains that celibacy is a gay Christian’s most biblical option. But he prefers encouraging people to “seek Christ” over “shaming them into a particular set of patterns of behavior.”

“Our focus should never be on how good we do, but on how good God is,” Chambers said. “When we are focused on the truth of his word and the grace that he embodied, I don’t think your life can help but be changed.”

Some critics traced their concerns over Chambers’s soteriology to his home church, Grace Church Orlando. Senior pastor Clark Whitten, who serves as Exodus’s chairman and recently published Pure Grace, could not be reached in time for comment. But he explains on the church’s website that only God can judge those “who say they are Christian yet continue in their sin,” so “the best thing we can do for that person is to keep loving them and telling them about our awesome King who died for them.”

“I can only imagine the sort of situation he finds himself in—trying to speak in a winsome sort of way to people who feel hated by evangelicals,” said Moore. “I just think that he has uploaded some really bad, reactionary tendencies from popular evangelicalism.”

“There is something going on in evangelicalism where everyone is always reacting against whatever error they encountered in childhood,” said Moore. “A lot of people who grew up in legalist, performance-based churches are over-reacting with an antinomian, repentance-lacking gospel.”

Unfazed by the accusations of theological error, Chambers addressed his detractors with some pointed words.

“It’s disappointing to see Christians drive personal agendas at the expense of other human beings,” he said. “We’ve received a tremendous response from men and women who are desperate for grace.”