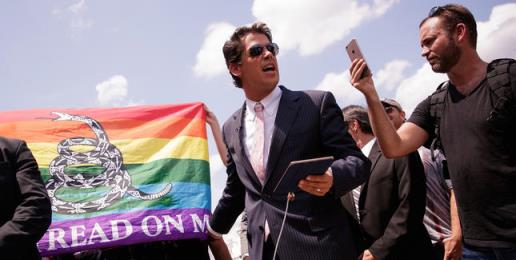 Some, perhaps many, within the Republican Party have of late been fawning over allegedly conservative activist Milo Yiannopoulis. For those who remain blessedly unaware of him, he is the foulmouthed, British, homosexual Breitbart News technology editor who was recently unjustifiably banned for life from Twitter following a Twitter twaddle battle with the foulmouthed actress Leslie Jones, who is a Saturday Night Live cast member and one of the stars of  the Ghostbusters remake.

To better understand who Yiannopoulis is, conservatives should watch this short video of Yiannopoulis speaking at a recent party of homosexual Republicans:

Perhaps Yiannopoulis had no control over the troubling photos of adolescent-looking hairless, shirtless boys adorning the walls behind him at this party, but he did have control over his continual sexual asides to men off-camera, which expose precisely why he should be rejected as any kind of hero for conservatism.

Anyone who understands that properly ordered sexuality, marriage, and the needs and rights of children are issues as vital to the flourishing of America as a good economy, lower tax rates, secure borders, and military strength should reject the anti-hero Yiannopoulis. He will not attract people committed to all the positions requisite to strengthen this country. He will bring in homosexuals and those who support their cultural agenda. He will bring in people who will corrupt the GOP from within.

Those within the GOP who understandably seek a bigger tent should stop fawning over the indecent Yiannopoulis simply because he holds some conservative positions and attacks liberals and liberalism. A person who delights in sodomy cannot possibly strengthen a party committed to conservatism. Republicans need to stop being so desperate for the cool kids to like them. The enemy of our enemy is sometimes our enemy.