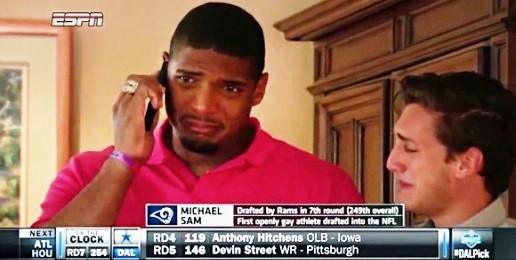 For the homosexuality-affirming movement to hold culture tightly in its foul grip, those for whom same-sex attraction and activity define “identity” must capture the hearts and minds of children who are our future. Hence the unholy clutching and scrabbling to rule public schools, even at the expense of intellectual freedom, diversity, and exploration.

They must also capture the hearts and minds of men—who are by nature leaders of culture. Hence the unholy scrabbling and clutching to transmogrify bastions of masculinity: the Boy Scouts of America, the military, and sports.

Those who find the video of homosexual NFL draftee Michael Sam “endearing” have had their consciences seared and values deformed. While it is a good thing that the rigid taboo against men expressing emotion has weakened, the image of a man tearfully stroking the arm of a weeping male lover and a celebratory homoerotic kiss between two men should provoke strong reactions—none of which should be “aw, isn’t that sweet.”

While pundits and the worldly wise celebrated the homoerotic predilections of Sam, Miami Dolphins defensive back Don Jones tweeted “OMG” and “horrible.” For those quickly deleted politically incorrect words, Jones is being fined and sent to re-education camp. “Horrible” means “dreadful; very unpleasant; and disagreeable.” Sentiments properly ordered should find homoerotic kissing “horrible.” God destroyed a city in large part because of homosexual activity, and God calls homosexual activity “abominable” and “detestable.” We should not find such acts “endearing.”

And a society that values diversity, tolerance (which means to endure that which offends you), religious liberty, and freedom of speech should not punish and “re-educate” those who dissent from “progressive” dogma or tweet one politically incorrect adjective

Click here to read this important article by English professor Robert Oscar Lopez who was raised by two lesbians. In it he provides a truthful overview of the history of and damage done by the homosexuality-affirming movement. This movement’s  disproportionate influence within our culture-making institutions accounts for the perverse cultural response to the Michael Sam video.

Lopez predicts that a phenomenon as profoundly anti-nature and anti-culture as this one cannot last forever. One day the scales will fall from the eyes of America, and they will see what their ignorance and cowardice have birthed. The suffering of children who are being sacrificed on the altar of adult sexual desires will finally become known. There will be more tragic stories like that of 66-year-old French attorney who specializes in humanitarian law, Jean-Dominique Bunel, who shares what he thinks about being raised by two lesbians:

It is not therefore the taboo against homosexuality that made  me suffer, but rather, gay parenting….[E]quality cannot be applied rashly to the ‘right to a child’ which exists nowhere and can be drawn from no text at all.
…

I suffered from the indifference of adults to the intimate sufferings of children, starting with mine. In a world where their rights are each day rolled back, in truth, it is always the rights of adults that hold sway. I also suffered from the lack of a father, a daily presence, a character and a properly masculine example, some counterweight to the relationship of my mother to her lover. I was aware of it at a very early age. I lived that absence of a father, experienced it, as an amputation.

Divorce does not deprive a child necessarily of its parents, who normally are given shared or alternate guardianship of the child. Especially, divorce does not replace the father with a second woman, exacerbating even more the affective imbalance, both emotional and structural, for the child. All psychiatrists ought to recognize that the latter does not depend on a woman the way it depends upon a man, and that the ideal for the child is that the two accompany each other in an equal, complementary way.

…My father, who had abandoned my mother when I was three, precisely due to the [lesbian] relation she was engaged in, was never around, notably when I needed him. Also I turned as much as possible to the men of my surroundings, who begged for an oversized and sometimes unhealthy place in my life.

…All my life as an adult was thrust out of whack by this experience…. I doubt that many children of gay couples will open themselves up easily and honestly to journalists on this very delicate matter. It’s traumatizing to speak of suffering that one would rather silence.”

…As soon as I learned that the government was going to officialize marriage between two people of the same sex, I was thrown into disarray…. by the fact that we would be opening, necessarily, this code to adoption, institutionalizing a situation that had scarred me considerably. In that there is an injustice that I can in no way allow.

…I oppose this bill [to legalize same-sex “marriage” in France] because in the name of a fight against inequalities and discrimination, we would refuse a child one of its most sacred rights, upon which a universal, millenia-old tradition rests, that of being raised by a father and a mother. You see, two rights collide: the right to a child for gays, and the right of a child to a mother and father. The international convention on the rights of the child stipulates in effect that “the highest interest of the child should be a primary consideration” (article 3, section 1). Here this ‘higher interest’ leaves no doubt.” But it is the wounded man who concludes: “If two women who raised me had been married prior to the adoption of such a bill, I would have jumped into the fray and would have brought a complaint before the French state and before the European Court of the rights of man, for the violation of my right to a mom and a dad.”

Those whose inherent right to a mother and father is being stripped from them will someday tell their stories. It is hoped that when that day comes, there will remain some with a conscience to feel sorrow and shame.