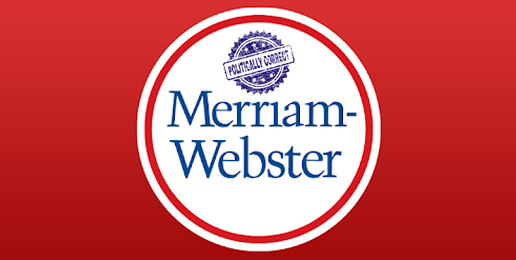 Merriam-Webster Dictionary and the “Transing” of Language
Written By Laurie Higgins   |   09.18.19
PRINT

Yesterday I commented under an article on The Hill on Merriam-Webster Dictionary adding “they” as a pronoun for “gender nonbinary” persons, an article that also referred to British singer Sam Smith‘s announcement that he’s “nonbinary.” Like Merriam-Webster, the Chicago Tribune has bought hook, line, and sinker the “trans” language rules. Writing about the singular man Sam Smith, the Trib wrote this embarrassing sentence:

Smith said they were excited and privileged for the support, adding that they’ve been “very nervous” about the announcement because they ”care too much about what people think.”

Someone responded to my Hill comment, and here’s the short confab I had with “NukeNado” about this nonsense:

Laurie: The “trans” community doesn’t have the right to unilaterally restructure English grammar in the service of their science-denying ideology. While “trans”-identifying persons may believe that each person creates his or her own “reality,” others believe real material phenomena exist, can be known, and matter. My reality includes the real phenomena in the world, like the fact that Sam Smith is a singular person and a man. And my reality excludes lying.

NukeNado: Language is a lie. It’s all made up and agreed upon. It is not some god given immovable property. This is just fake rage you are communicating. No one is going to haul you off to jail if you don’t use the correct pronoun. But if a trans person says they prefer to refer to by gender neutral pronoun, you could be courteous and respect that. However, you’re a free person. You can always reserve the right to be a d**k.

Laurie:You evidently don’t read enough. NYC passed a policy that will fine people up to $250,000 for refusing to use incorrect pronouns in the service of a destructive, science-denying ideology. You can’t actually be naïve enough to think “trans” cultists and their dogmatist friends will stop at NYC. Whether using incorrect pronouns is respectful or harmful depends on whether the ideology reflects reality and is harmless. It doesn’t and it isn’t. I wouldn’t pretend that Rachel Dolezal is black. I wouldn’t pretend a 50-year-old man is 30 or 6. And I wouldn’t pretend “amputee wannabes” (i.e., those who have BIID) are amputees either. Am I a d**k for living in reality with regard to race, age, and disability too? You mistake superficial sentimentality for true compassion and respect, both of which are inseparable from truth.

[A]ll social engineering is preceded by verbal engineering. There are many things that simply cannot be brought about if it is clear to everyone what is going on…. What happens is that you get very negative things wrapped in very pretty paper, and that helps change the focus of discussion; because before the unthinkable gets thought, and the undoable gets done, the unspeakable must be spoken of in a different way…. The way we think about things is the way we speak about things which eventually affects the way we do things…. Always listen to the words. When you hear terminology, such that it’s not exactly clear what someone is talking about, we should all have the guts to say “just what is it you are talking about?”

Language matters. Never capitulate to the language diktats of the “trans” cult, who are promoting a body-, soul-, and culture-destroying ideology.